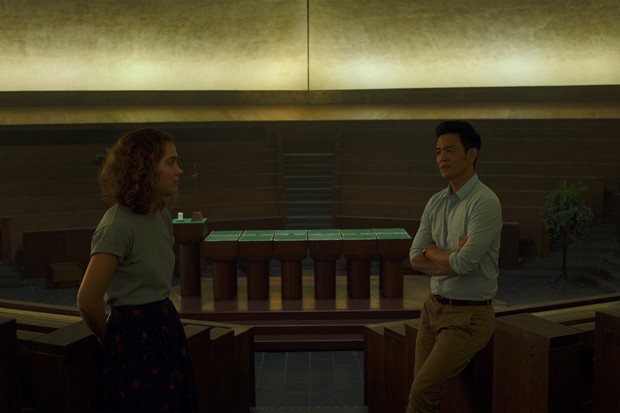 The path to becoming a director is one generally accompanied by a profound knowledge of film history, but that passion is rarely more public then when it comes to kogonada. After years of working on visually detailed video essays for The Criterion Collection, Sight & Sound, and more, he’s now made his directorial debut with Columbus, an impeccably composed drama of quiet humanity and curiosity. If his nickname wasn’t enough of a hint, traces of Yasujirō Ozu’s influence can be found, but this first-time director has created something distinctly his own. Ahead of an August release, the first trailer has now been released.

“As these two parallel stories are told, and eventually converge in a wonderfully blocked sequence, Columbus unfolds with a patient rhythm, comprised of characters who are resistant to wearing their emotions on their sleeves,” I said in my review. “This leads to making their interactions all the more genuine as we first must acquaint ourselves with the location and history before peeling back layers. Richardson, who recently made an indelible impression in The Edge of Seventeen, is the stand-out here, playing Casey with both an independent streak (especially when it comes to the advances of her library co-worker played by (Rory Culkin) and a longing for resolution as it pertains with letting go of her burden with her mother.”

When his father, a renowned architecture scholar, falls suddenly ill during a speaking tour, Jin (John Cho) finds himself stranded in Columbus, Indiana – a small Midwestern city that is celebrated for its many significant modernist buildings. Jin strikes up a friendship with Casey (Haley Lu Richardson), a young architecture enthusiast who works at the local library. As their intimacy develops, Jin and Casey explore both the town and their conflicted emotions: Jin’s estranged relationship with his father and Casey’s reluctance to leave Columbus and her mother. With its naturalistic rhythms and empathy for the complexities of families, debut director Kogonada’s COLUMBUS unfolds as a gently drifting, deeply absorbing conversation. With strong supporting turns from Parker Posey, Rory Culkin, and Michelle Forbes, COLUMBUS is a showcase for its director’s striking eye for the way physical space can affect emotions.