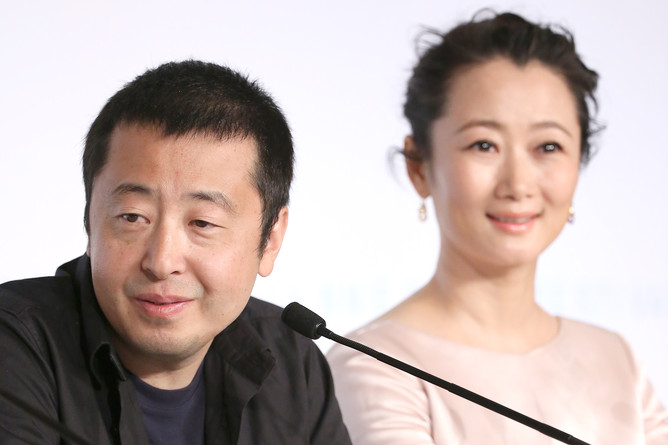 One of our favorite films of the 2015 Cannes Film Festival, we said in our review, “Though vastly more moderate than its predecessor, the ultra-violent A Touch of Sin, Jia Zhangke’s Mountains May Depart continues the director’s move away from the extremely measured, observational style that characterized much of his earlier work. Even as his narratives have become more charged, however, Jia’s thematic focus has remained constant and Mountains May Depart offers his latest reflection on the momentous societal changes that have swept over China as a result of its entry and ascension in the globalized world economy. If A Touch of Sin expressed Jia’s rage at the contemporary impact of capitalist progress on Chinese society, Mountains May Depart is his lament over the direction in which it is headed.”

While at the festival, we had the opportunity to sit down with Jia Zhangke to discuss his latest film in a roundtable. We talked about the film’s ambitious (or lack thereof), if he attempted to comment on society, his use of music, using the English language, and much more. Check out the conversation below and see another interview here.

Some are calling Mountains May Depart your most ambitious project to date.

I think it might actually be the least ambitious film I’ve made so far. At the same time, I would also call it the most intimate. It’s the film that speaks to my own emotions and experiences the most closely since Platform. Most of my other films like Still Life dealt with societal changes and what they meant for individuals, whereby the existence of the individuals was always on the line, so their personal feelings only played a minor role.

As time went by, I entered my forties and have accumulated more and more memories. With it came the urge to tell a story that’s more about my emotions. And I also needed to tell this story at this stage of my life, because it probably won’t describe how I feel when I’m in my fifties.

As you just said, this is an emotionally-driven movie, but did you intend to make certain comments on the Chinese society through it as well?

Individuals still exist within the context of society – I’m not making a fantasy film that’s completely separated from reality. Every person is at once his own self and a member of a larger community. The character Jinsheng, for example, is someone driven by the need to become rich. Tao is a woman with her own background who gets caught between two different types of guys. When I approach their love story, I also try to offer some thoughts on the value system reflected therein, like the materialistic way in which our mind works these days. Take me as an example: I’m always busy working and don’t spend much time with my mother. Whenever I do get to see her, I compensate by giving her money before promptly leaving again. I regretted doing that and finally brought my mother over to live with me in Beijing, because I’ve come to realize that money is not of the essence, time is. This is the kind of sad realization I gained with age, and I wanted to project that into this film. So Tao forgoes custody rights of her son because she thinks he’d be better off with his father for his wealth. But where does that reasoning leave her? She ends up alone and her son grows up not even able to speak his mother tongue.

What I also wanted to talk about in the film are the basic human conditions that we all go through, from life, sickness, accidents to death. So Tao gives birth, Liand falls ill, Tao loses her father and, notably, everybody ages. These are all life’s lessons; lessons you start to learn once you hit middle age. My first major lesson was the death of my father when I was 36. Before then, such a thing didn’t even cross my mind – just like in the 1999 segment of the film, when everyone is young and alive, notions of pain and misfortune seem simply inconceivable. But the movie wouldn’t be what it is if one only looks at this segment. Instead it moves forward in time. where everything changes. And as time goes by, the decisions we make based on materialistic reasons might lead to even more regrettable outcomes in the future, as foretold by the 2025 segment.

There are voices in the Chinese media which criticize you for overselling the “Chinese element” with this movie; others find the subplot of the teacher-student affair a bit too sensationalistic. How would you respond to such criticism?

I am a Chinese director, so there’s no separating my work from the so-called “Chinese element.” Even when I travel to Australia to film [the 2025 segment], it’s still very much a Chinese picture. As for the latter criticism, I think it speaks right to the point I was trying to make, namely the question of personal liberty. Can you still stay hopeful and find romance when you turn old? There are many restrictions posed upon us in life. Are we allowed to love someone much older or younger? Can we love someone of the same sex? It’s all a matter of liberty.

What are the reasons for the prominent use of music in this movie?

It’s true that I haven’t used so much music in a film since Still Life. One reason is the overall lower density of dialogue. For this movie, I didn’t want the characters to talk too much. I wanted more open space in which to develop the contour of these characters. For example, the opening dance number shows a body language of the young Tao that’s drastically different from when she’s in her fifties, chopping vegetables and walking her dog. I find this visual contrast more striking than words. And music happens to be a good support for these non-verbal sequences. Also, I think music brings out those feelings you know are there but can’t put into words.

Some observers say the reason for the international popularity of your films is that they deal with the changes in the Chinese society. Do you see it that way?

I think in order for a movie to be appreciated, it ultimately needs to be an aesthetic creation. Who would care for a film depicting a lot of social realities but devoid of a sense of aesthetics? If my movies have appealed to an international audience, I hope it’s because on a substantial level, they bring the contemporary Chinese experience to the big screen, and that at the same time, they have an artistic quality to them.

There’s a considerable amount of English dialogue in the movie. Has that been a challenge?

The way I approached it was I first wrote the dialogue in Chinese, which I then had translated by a British film critic. When we first began shooting this part of the film, I’d listen carefully and make sure every word was pronounced correctly. After a while, I realized you only needed to listen to the rhythm of speech. It’s the same with Chinese dialogue. If an actor messes up a line, the rhythm is definitely off. When they get it right, the rhythm would naturally sound good. From there it all went smoothly and English ceased to be a problem. These past days, I was even approached to direct English-language films, which I’d like to try someday.

Did you have to make any compromise filming this movie?

No. I’ve been making films for 17 years now and have never made any compromises.

Mountains May Depart premiered at Cannes and will be released in the United States by Kino Lorber. See our festival coverage below.