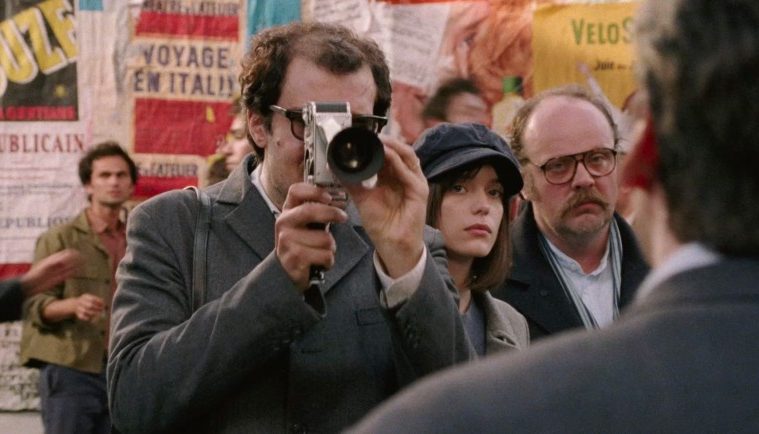 One of his classics is on the official poster for Cannes Film Festival and he has a highly-anticipated new feature premiering at the festival, so it’s a fitting time for a new biopic surrounding Jean-Luc Godard to arrive. After taking on the silent era with his Best Picture-winning The Artist, Michel Hazanavicius will now focus on the French New Wave era with Godard Mon Amour (formerly Redoubtable), which arrives in theaters next week.

Featuring Louis Garrel as Godard and Stacy Martin as Anne Wiazemsky, the film depicts their relationship within the director’s late-60s “revolutionary period,” beginning with the production of his Mao-centered La Chinoise. Today we’re presenting an exclusive clip from the film courtesy of Cohen Media Group, which finds a fan of Godard singing his praises to him on the street without much to say. As one can imagine, Godard’s reaction is anything but pleased.

“It’s more Pastiche du Godard than Histoire(s) du Godard in Michel Hazanavicius’ Redoubtable and that’s not a bad thing,” Rory O’Connor said in his review. “The director’s slight but surprisingly playful account of nouvelle vague maestro Jean-Luc Godard’s marriage to actress Anne Wiazemsky and his re-radicalization in the late 1960s has the potential to infuriate the more devout of Godard followers but there is plenty of good-hearted goading and creative homage to savor for the less pedantic fan.”

See our exclusive clip below and the trailer here.

In 1967, Anne (portrayed in the movie by Stacy Martin) is a rising star completing her starring role in “La Chinoise”, the eagerly awaited new work from the most renowned filmmaker in France, Jean-Luc Godard (Louis Garrel). The two have happily fallen in love, and are married in the summer. Making their home in Paris, Anne and Godard share adventures and cultivate creativity together. But as his new movie gets a divisive response and he staggers between projects, Godard reveals himself to his new wife as a walking mass of contradictions. Hailed as an icon, he is insistently iconoclastic; seen as a public figure, he does not enjoy being recognized by fans; and while in love with Anne he can also be aloof. With artistic ferment channeling into the societal activism surging across France, suddenly their married life includes street protests, political discussion halls, and a possible shutdown of the Cannes Film Festival. The nation-defining events that rock France in May 1968 lead to profound self-examination for Godard and strengthen Anne’s determination to preserve their marriage.