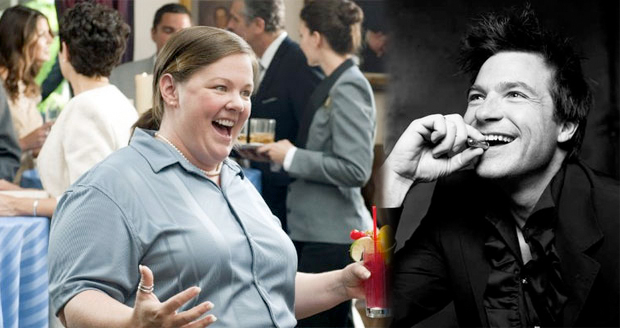 It’s been a year to remember for the R-rated raunchy comedy, and both Melissa McCarthy and Jason Bateman have a lot to do with it. McCarthy, who made a splash in Gilmore Girls and then a bigger splash in Fox’s Mike and Molly, stole every scene she was in earlier this year in the surprise hit Bridesmaids. Likewise, Bateman, who also had a career turnaround thanks to television (Arrested Development), anchored Horrible Bosses, a thin comedy which thankfully allowed for much improvisation.

Now McCarthy and Bateman are teaming up together for ID Theft, a script about a guy who’s identity is stolen. The part of the identity thief was originally written to be played by another actor, but when Bateman saw McCarthy’s turn as Megan, the crazy sister of Maya Rudolph’s groom, he convinced Universal to have the script rewritten so the thief could be played by her. [Deadline]

And so it is, with shooting to begin in April 2012. Bateman is also producing the film, alongside Scott Stuber (Role Models). The move to cast McCarthy feels fresh enough to work. Her manic comedy should play well against his patented subdued sarcasm. That said, it’s a high-concept comedy, something Bateman tried at recently with The Change-Up to quite disastrous box-office results.

How do you feel Bateman will work against McCarthy?