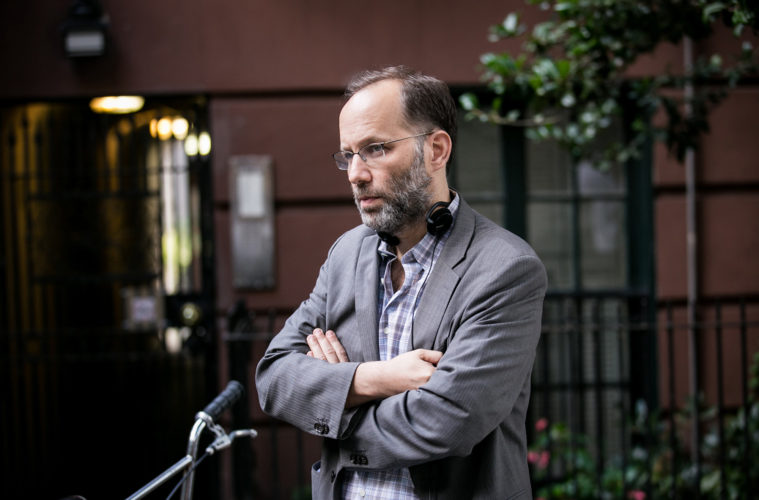 At one point in Ira Sachs’ Little Men, the young Jake (Theo Taplitz) explains to his parents (played by Greg Kinnear and Jennifer Ehle) how they can avoid evicting their tenant, Leonor (Paulina García), from the store she’d been renting from his late grandfather for years. Jake’s simple economic plan makes the heart ache because of how perfect it is: it calls for empathy, equality, and, without being completely naive, proposes something that could be achievable within the right political system. But his plan is even more heartbreaking because he knows it’s his last chance to salvage his friendship with Tony (Michael Barbieri), Leonor’s adolescent son, who’s become his closest, dearest friend. As the adults stand in disbelief of Jake’s plea, is he addressing their inner child or are they merely getting a preview of the troublesome teenage years ahead? Sachs makes us wonder who the “little” people from the title are. Is it those who are still young in years, or those who have lost the ability to believe they can achieve greatness?

As with all of Sachs’ films, Little Men is a study in compassion and humanity where each character deserves a film of their own. As thorough in his writing (he co-wrote the screenplay with frequent collaborator Mauricio Zacharias) as he is detailed in his direction, Sachs offers his audiences the opportunity to embrace complex moral dilemmas the likes of which mainstream American cinema has practically dispensed of. Regardless of one’s spiritual beliefs, Sachs’ films are about soul-searching, and Little Men might just be his most profound work to date. I sat down with Sachs at the Magnolia Pictures offices in New York to talk about the films that inspired Little Men, how he came up with a thematic trilogy, and his upcoming film about Monty Clift.

In your last three films you’ve showed us stories about men in different chapters in their lives, we have the children in Little Men, the adults in Keep the Lights On, and the older adults from Love is Strange. How did this trilogy end up manifesting itself?

I wasn’t preparing a trilogy when we first did Keep the Lights On, but by the time we finished Love is Strange, Mauricio Zacharias and I felt there was a third story to tell which focused on young people. That was quite conscious, but, with that said, they exist in very different universes. Once we made that decision, we focused on the story of the boys and their families. I guess that’s where the film is in dialogue with Love is Strange, they’re about generations and the conversations between them.

…by New York and the people involved in telling the stories. There’s themes that come through the films in a sustained way.

Did you want to tell a story about New York decaying?

No, I guess when I make a movie I try to be as accurate as I can with my depiction of place, character and community, so each film have a different community they investigate. I think art, in particular cinema, is by nature about change so a thing film documents is change in a city and an evolution that never stops. By documenting your time with precision you are speaking to elements of life which are ageless.

When we talked about Love is Strange you mentioned you had been watching a lot of Ozu which influenced the outcome. You also mentioned The 400 Blows in preparation for your next project. Was this it? Because this certainly feels like a Truffaut tribute.

Yes, but specifically this film is a remake of two Ozu movies: I Was Born But… and Good Morning, which is a remake of his own film. In both films, kids go on strike against their parents, and that seemed to Mauricio and I to be a great plot. We took that plot and little else from these movies, except our love for Ozu, which we carry on, and that’s how this began. As we started meeting on 23rd street, a block from where we are now, to talk about this movie, we tend to talk about movies and life when we get together. Mauricio is from Rio and his family owned a shop and they were in a long battle with a tenant to evict her. Every day, he would tell me some different episode of what was happening in that story and he told me how one day they were in court and when they went back to the shop she had posted a sign that said “Help Wanted.” I thought that was a great scene, and also I knew there were two sides to that story, that gave us the nuance for our plot. We have a Romeo and Juliet story here between two kids from different families who are in great conflict.

I’m glad you brought that up because I wanted to talk about the sexual dynamics in the movie, which reminded me of the kid from Love is Strange, too, and it’s that you open the door for these boys to grow up and be gay without ever imposing a sexual orientation on them. Just the fact that this is an option for the characters without being the center of their plot is so remarkable.

I think the parents in the film are wonderful. They’re flawed; they disappoint their kids. As a parent, I know I will disappoint my kids too and that recognition is very Ozu. We struggled with how to make decisions for these kids and, ultimately, I felt that I couldn’t impose a future on these characters or the actors. Specifically Jay, because he represents me in the film — also my husband, who is a painter and went to LaGuardia School. I felt I had cast two kids who were not at the point where I could define their future and I accepted that. It also probably reflects my own experience of friendship as a child and as a gay man. My adolescent friendships were not the site of my sexuality. My sexual relations occurred outside that realm.

I keep walking to this building and the last shot of Keep the Lights On is the corner of 26th and Broadway, and it’s changed one hundred percent in 5 years. Every time I walk past that corner, I think that was me as the character of the filmmaker going into the future, going into the unknown. Generally my films end in an open space in which the future is not determined.

Right. Beyond that, I got so defensive of Leonor, maybe because I’m a Hispanic immigrant myself, and the friend I watched the movie with took the side of the parents. In this election cycle I just had to see Leonor as someone who would be reviled by Republicans, but that’s probably not something you wanted to impose on her, either.

It is a little bit in this film, to the extent that I think it’s nice that you’re saying that you leave the films and you engage in conversation or argument — which is my intention. At the end of the film, I hand the movie over to the audience; I don’t tell them what to think. I like an open ending, so it would make sense that people want to argue about it. What was intended was not to stack the cards on either side, which is also very Romeo and Juliet, which has no villains…

…or Tybalt, who I played in a children’s theater in Memphis. For example the rich are not really, really rich or the poor are not really poor. They are similarly educated and feel like they belong to the same class which calls for moral suspense, because you do vacillate in your identification. I always think of Patricia Highsmith when I’m making a film. I always think, even in art films, you need to create suspense.

As a theatre nerd it also struck me how the kids in the film are basically Konstantin, and you chose The Seagull as the play the father stars in. Did you talk to Michael and Theo about Chekhov?

No, one of my favorite lines in the film is when Michael says he’ll do a Strindberg play because it has two actors and that’s all he knows about Strindberg, which to me is very funny.

But why The Seagull  and not The Cherry Orchard?

Mauricio and I are writing a film about Montgomery Clift and he performed in The Seagull in the 1950s, so we were very familiar with that and had been studying the backstory of that production. We actually tried to get the rights to “No Exit,” but the rights are controlled by the Sartre Estate which is controlled by his wife and she didn’t give us the rights to use this bit, so we ended up choosing Chekhov because without being too heavy handed felt right. I also liked the idea of Greg Kinnear in period costume doing Chekhov.

I hope we can see that production for real some day…

[Laughs] I don’t know about that.

I really liked that scene in which we see Michael’s character doing the acting exercise.

In that scene I wanted to show the kids from that school in Bay Ridge, Brooklyn. I wanted to make people feel like they were in that classroom, it’s important for me to build that world with as much detail as possible, show class and race. The kids are actually doing Meisner within Strasberg, the two are oppositional approaches so I’ve now had long Facebook conversations about whether I did good Meisner or not [laughs]. It was important for me to show the kid was talented, so we could invest in his hopes.

I’m really curious about who you’ll cast as Elizabeth Taylor in Monty.

Freud is a big part of our script.

That’s great. How do you narrow what aspects of someone’s life you want to focus on?

It’s a long process. Eventually, you have to find your own story which is separate from the research and the real world. You are making creative and narrative decisions, so you have to create a world within your screenplay which you begin to believe, and then that becomes the life of Monty Clift. Suddenly you forgot there was this whole thing you thought you needed which is no longer there, and when the screenplay works it feels like it’s the only story you can tell.

What’s the definitive Clift performance for you?

I don’t have a favorite. I discovered some, though, like The Search, which is a Fred Zinnemann film he made after Red River and before A Place in the Sun. It’s so loose and alive, he made it in Germany at the end of the war, he becomes a document of a very emotional time, his emotions are part of the story.

You’ve done period pieces before — Married Life is wonderful. What excited you the most about going back in time? Any other characters you’re dying to cast?

I think if you do period well it’s not about period, it’s about life and it seems as contemporary as possible. This neighborhood is great for Monty, because it’s a very New York story, he never left this city, so there is so much here that I hope to get right. I’m interested in casting Lew Wasserman. He was very important, especially in connection to Freud, which came at a very dramatic point in Monty’s life. It’s a whole imaginary universe, I’m still in the fictional version, it needs to be greenlit, so now I’m on the page and I try to stay there.

Little Men is now in limited release and expanding throughout the month. Watch a talk with Sachs above.