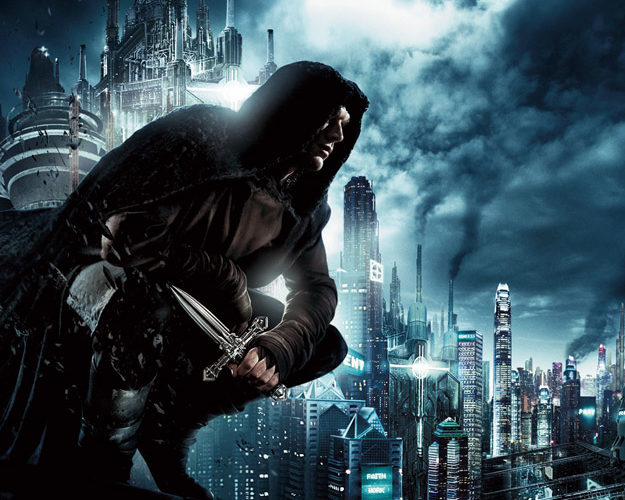 The post-apocalyptic sci-fi thriller Priest is set in an alternate world, one ravaged by centuries of war between man and vampires.  The story revolves around a legendary warrior priest from the last vampire war who now lives in obscurity among the other downtrodden human inhabitants of a walled-in dystopian city ruled by the church.  When his niece is abducted by a murderous pack of vampires, the priest breaks his sacred vows to venture out on a quest to find and rescue her.  He is joined on his crusade by his niece’s boyfriend, a young trigger-finger wasteland sheriff, and a former warrior priestess who possesses otherworldly fighting skills.

During the 2011 WonderCon convention in San Francisco, I had the chance to sit down with the cast of the upcoming flick including Paul Bettany, Cam Gigandent, and Lily Collins, as well as director Scott Stewart, and graphic novel creator Min-Woo Hyung. Below is a summary on what they had to say about the film: The Film Stage: What was the best part of having a larger budget for Priest as opposed to a smaller budget like Legion?

Scott Stewart: Legion’s budget was really tiny.  So having triple the size is more for sure.  It’s nowhere near as big a budget movie as some of the summer movies we’re going out against, not even close.  This, for us, is kind of a cool thing because we feel the movie really does deliver and it does create a big world.  The bar for us is lower.  When you’re making a 250 million dollar movie, it’s hard to take risks and the film has to perform a particular way and at a particular level.  It gives us a lot more margin to play and have fun with it and gave us more freedom creatively.  Legion was isolated and placed entirely in one location, we tried to put as many big images as we could in there, but there was a restriction on what we really could do.  This is an entirely different kind of film, a different story.  It’s a very straight forward adventure movie and has a very clear goal for the characters trying to get through as he goes on this search for this young woman.  He’s confronted by two different adversaries over the course of the movie which he’s been dealing with.  It was the chance to make a big landscape movie.  Having the budget allowed us to make the world feel more comprehensive and make the action scenes, especially with the digital characters, the vampire characters, more elaborate and exciting.  That’s fun, but even so, we pushed really hard against our budget.  I think the movie looks a lot more expensive than it was and that means we just had to plan things really well.

The movie takes place a considerable time after your books ended.  Does the movie go along with your vision of the future for this story?

Min-Woo Hyung: The original story was set in the old west.  Purgatory bridges the story and the movie, the only change really is time.  The movie still sticks with my concepts of the old west, religion, and superstition.  I’m satisfied with the movie because it’s still my concept.

How did you approach this film differently, being special effects heavy, as opposed to some of the other films you’ve worked on?

Paul Bettany: They feel like different things.  I went straight from this movie to making a film in 17 days with Kevin Spacey and Stanley Tucci.  17 days, 12 pages a day.  That was intense and hard in its own way.  But this was a lot of getting up at 4am to go to the gym, combat training, and wire work.  There was this one moment where we’re driving across a salt flat, the train trailer was being pulled by a truck doing 50 miles an hour and I’m on a bike, which is on a rig attached to a jeep and I have a wire on my costume.  I stand up on a bike and I have to jump onto this fucking train at 50 miles an hour.  I know I’m wired, but I’m thinking, “How did I get to this point in my life.”  At that point, I’m genuinely not concerned with the fact that there are no train tracks and a truck and a camera crew.  There’s so much to ignore anyway, there’s a huge camera crew.  I didn’t really have any trouble with that stuff.  I remember once it was difficult.  There’s this moment where I jump up and meet this vampire mid-air and I stab him in the chest and we hit the ground and I cut his heart out and in actual fact, that evening when I did it, I ran across the yard and I jumped up into the air and the timing had to be perfect for me to meet this incredibly un-frightening pillow that was flying towards me on a rope.  (Laughs)  That was the most challenging part of the imaginative work I had to do.

How was it working with Scott on the set of Priest and what are your thoughts on working with him again on Mortal Instruments?

Lily Collins: This was his second film, so he’s relatively a new director, but he comes from a visual effects background so this world that he created has always been in his head.  We didn’t necessarily know what it was going to look like ultimately, but he did and he knew how to get there.  He was surprisingly such an actor’s director, yet it’s only his second film.  He really knew how to connect to each of us in a way that we understood.  He could talk to me and get something out of me that he wanted to get out of Cam or Paul, but he would give us different scenarios and connect with us on a different level.  He’s just calm.  Sometimes it’s eerie when you have all this stuff going on and it’s a really freaky film with things flying everywhere and fire and he’s like, “we’ll get it, we’ll get there”.  It puts you in a really calm place.  I saw the 3D footage for the first time yesterday and was blown away.  I kept thinking, he created this alternate world and this is what Mortal Instruments needs.  Mortal Instruments is this other completely different fantasy world and I have complete confidence that Scott can take it there because he did with Priest. He’s fun and funny too.  I don’t feel like there was tension ever with everything that was going on on-set, because he makes it really comfortable.

What was it like on the set with Paul?  Are there any stories you could tell us?

Cam Gigandet: Plenty of stories.  I could tell a lot of shit about Paul (Laughs).  His motorcycle actually had training wheels on it, seriously.  To be honest, every time he walks onto the set, he makes everyone in a good mood and that’s kind of how the set was every day from day one to the last day of shooting.  It’s to his credit that he kept up that energy for everyone around.  That’s tough to do.  He’s definitely someone, and something, that you should aspire to be, especially as an actor.  Lesson learned.  I still don’t do that.  I’m still a little shithead (Laughs), but one day.