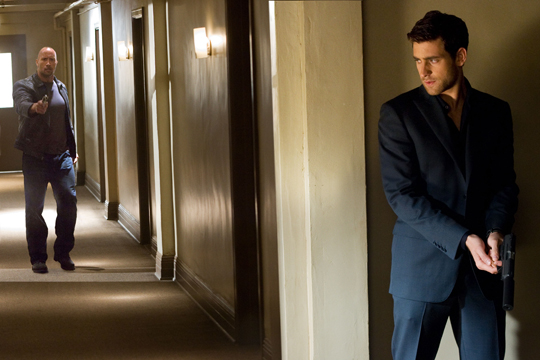 British actor Oliver Jackson-Cohen may not be immediately familiar to filmgoers but with his starring role alongside Dwayne “The Rock” Johnson and Billy Bob Thornton in the aptly titled Faster he is sure to leave a lasting impression on audiences in the US. The star, whose looks are reminiscent of the likes of Jake Gyllenhaal and Robert Pattinson, will surely attract legions of fans over the next few years. We were able to chat with the  actor who is in LA during a break from shooting his next film in Serbia and he opens up about his breakthrough role, his favorite action films and, of course, his stylish clothes in Faster!

The Film Stage: Can you tell us a little bit about your character in Faster, they don’t really reveal too much in the trailer other than that you and Dwayne “The Rock” Johnson are each other’s nemesis?

Oliver Jackson-Cohen: Yeah, tryin to kill each other! He’s called Killer and he is a young – umm, basically he’s a hit man! He was sort of a wiz kid and had a software company that he sold at a very young age and made a huge amount of money from. He had a very traumatic sort of childhood growing up and had a leg deformity. And so it drove him to sort of beat himself the whole time, try and be the best that he could be. He’s a thrillseeker and on top of that he’s OCD, bi-polar and incredibly erratic. He’s kind of a force to be reckoned with, really. He’s not one of the nicest people in the world and not one of the sanest by any means! He’s sort of one third of the movie, really, there are three storylines running all alongside and then they all intertwine toward the end of the film and then all three characters are connected but you don’t quite figure out how until the end.

TFS: What was it like being part of a trio with The Rock and Billy Bob Thornton?

OJC: Oh, it was incredible! It was so exhilarating. Like, it was daunting, I mean, so daunting! Cause you know, I think, the studio and, ya know, George [Tillman, the director] and Dwayne – I mean, they all took such a huge chance casting me. I mean, it was such a huge risk! It was incredible. Ya know, it’s ‘The Rock’! You get to work with ‘The Rock’ and then Billy Bob Thornton who I’d been a fan of since when I was a kid! They made me feel so at ease and they understood [that this was my first major role]. I had done a small film before a couple months earlier for New Line and that was it but it was like a small little part. It was a big challenge but hopefully it sort of worked! It was great working with them. They were just the nicest, nicest people – such a nice crew and the rest of the cast as well. Not just us three but there was Carla Gugino – who I think is amazing – and Maggie Grace – who plays my other half in the film – it was just such an amazing experience.

TFS: Speaking of the women, do any of them get involved in some of the action in the movie?

OJC: I know! And I’m always just the worst at that because I’m not very good at censoring but I think it says I’m not allowed to say! But, yeah, they’re sort of involved in it. Fundamentally, its three completely separate storylines that all then intertwine toward the end. It’s about these three men that are dealing with their own insecurities and their own thing they feel they need to get back at the world for. So, yeah, it’s kind of an exhilarating ride.

TFS: Can you tell us how you prepared for this role and what your inspiration was for constructing your character?

OJC: I think the biggest thing is that George and I – George Tillman [the director] – from the beginning when I met him we decided immediately that – I think I came in and said that we have to talk about his backstory because that’s what makes him who he is. Because on paper he could have been played so many different ways and I think I made a decision and I said I don’t necessarily want people to like this guy and he was written in a way that he could have just been a smooth hitman but he’s not. He’s riddled with insecurities, he’s riddled with angst, he’s basically just a thread waiting to unravel. We started at the beginning, we started with his childhood and where he grew up and originally he was supposed to be American and I was gonna [do an American accent], they cast me and we decided last minute that we were going to make him British because we thought that it would be something a bit more interesting. Because he’s incredibly unstable, nothing can stop him. He pushes himself to any limits and he pushes himself to a limit that he doesn’t care about the outcome because he’s too erratic to even think about what the outcome will be. So, yeah, we made him a crazy old hitman!

TFS: You had mentioned that your character was originally going to be American and I know that you’ve done a few other American films in addition to your British work, have you had to do an American accent yet and is it something that you find intimidating?

OJC: Yes [I’ve done American accents]! I did a film a few days after finishing Faster in Boston for Fox were I played an American as well. My dad is French, so I went to French school and have more of a French accent. I’ve never found it really hard but having done it but it hasn’t been viewed by millions of people. So, I might be insecure about it once the movie comes out. I went in and read as an American [for Faster] and they sort of didn’t question it. The next two films though, I’m American so we’ll see how it turns out!

TFS: This movie comes in a long line of these actioneer movies and we were wondering if you have a favorite action movie or action hero?

OJC: Die Hard! John McClane! Always! I still want to be Bruce Willis – [chuckles] – I mean, it’s kind of ridiculous! Die Hard is way up there, hmm, what else? Obviously, I want to be Dwayne Johnson in The Rundown – he’s amazing!

TFS: Now, I read that you didn’t get to keep any of your characters clothes but your character is kind of a GQMF and how important were the clothes to the character?

OJC: Ugh. They were amazing! I’m like the laziest bastard when it comes to getting dressed. I dress like a 12 year old! It’s ridiculous. We sat down at the beginning that he would be impeccably dressed and his hair would be impeccable and everything about him would be perfectly in place or else he’ll fall apart. We had this incredible costume designer called Sal Perez who designed this whole wardrobe for him and everything was either custom made or severely altered. The problem was that they had to train me up for the film. I put on something like 20 pounds of muscle – it was ridiculous! So I kept changing, my whole body was changing while in preproduction. What would fit would then have to be opened up to make bigger or shortened in the waist. By the end of it they were these incredible, incredible, beautiful suits, shoes and coats and I didn’t get to keep any of it! Which is crazy! But, yeah, he’s a smooth dude.

Faster opens in theaters nationwide today. You can view the trailer here and check out a clip below via Yahoo.

Are you seeing Faster this Thanksgiving Holiday?