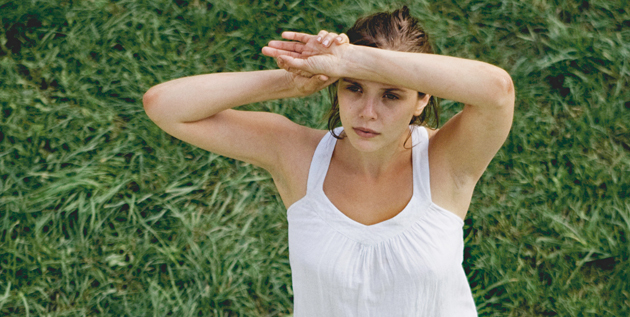 Despite all the hype and stars that jockeyed for pole position at Sundance in 2011, it was a low-budget feature from a first-time director with an untested leading lady that became the festival’s breakout star. Marcy Martha May Marlene is a tautly paced drama that centers on a young woman haunted by her experiences with a mesmerizing cult leader played by indie icon and recent Oscar-nominee John Hawkes. Helmed by Borderline Films co-founder Sean Durkin, the gritty indie drew praise for its restraint and enigmatic ambiguity as well as for the powerhouse performance of film newcomer Elizabeth Olsen, who boldly shouldered the role of the complicated title character.

Out of the fest, critics were raving, declaring Olsen an indie ingénue to watch. Many marveled that her only prior onscreen experience was as a supporting player in a handful of her sisters’ (Mary Kate and Ashley Olsen) kid-friendly videos. When I finally had a chance to see Martha Marcy May Marlene when it screened for NY critics, I feared that there was no way the film could live up to all the hype. Much to my relief, it surpassed even my highest expectations, delivering a narrative so powerful and haunting that it seems to pursue me still, as fear does its heroine.

So, I was eager to sit down with Olsen and discuss the feature, her thoughts on the pressures put on ingénues in the film industry, the influence of the paparazzi, and her favorite cult movie. I found, much like her onscreen persona, Olsen is instantly engaging, as well as whip-smart with a deep love of her craft that is sure to shine throughout her career.

The Film Stage: What drew you to this project?

Elizabeth Olsen: Well, for many reasons I liked the script. When it comes to being a theater student, you try to figure out what kind of playwrights you like. The playwrights that I like tend to use non-linear structure and ambiguity and rely on their audience to be active participants. And so when I was reading [Sean’s script], just from an audience perspective, I really enjoyed the kind of the mystery, and the puzzle, trying to solve it as I was going. Also, Martha was just someone who offered a lot to me to kind of figure out and work on. [Laughs]. I was reading so many scripts at the time and they were all so bad, literally. I’m sure 75% were never made. Then, I got an audition with Sean, and I thought I totally got his vibe.

In MMMM, what struck me most [about your performance] is that Martha is never sexy; she’s never cute. She’s intimidating and sometimes frightening. As this was your first film, were you at all worried that such a gritty role would hurt your marketability as an actress?

There’s two things I thought about. The first being I was scared that it would set a precedent that I was [unreservedly] down for nudity in films. Which I only am if I feel it serves a purpose. I didn’t really understand how important it was to the film until…right before making this movie I saw Holy Smoke, Jane Campion’s film. Kate Winslet just does such brave things in that movie, and if she didn’t it wouldn’t have been as frightening and – it just added so much to the story. And it’s important to the storytelling part. And I truly believe that — well, I’ve [laughs] had many teachers who have said — actors are literally the last part of making anything…and so I’ve always thought that actors are these tools to help tell a story. And you know, I give myself a little bit more credibility, like, ‘You’re not just an object, Lizzie. [Laughs] But you are a tool to tell a story better and that’s just really fundamental.’ And this story, I think it requires [nudity to do that]. So those are the ways I kind of navigated [my reservations] in the beginning.

So you worried about being typecast, but not so much about how the media would perceive such a gritty role?

No. I think if anything, it’s more reflective of the type of work I would want to do. So, the only way that it would affect me would be to put me in a position where [I’d be offered those kinds of roles]- I’m fine with getting down and dirty making a movie. It’s just fun to me to do something that’s basically challenging and emotionally difficult. At the end, it’s like you just finished a marathon. It feels great. As opposed to – I mean, I’ve done a couple of films just because I wanted to also. They are more simple, and I was in a place where I really wanted to do that. And in the end, you’re like, (in a breezy upbeat voice) “Oh I did that.” But when you do something that requires so much of your body and your heart, mind and soul, it feels like a victory.

Your sisters have long been targets of the press and paparazzi. Being a witness to all the mania surrounding them, did any of that make you second-guess an ambition for acting?

Yeah. It did. Mainly when I was in high school though, like 14, 15 years old. Because you’re so impressionable at that age, I was so weirded out and confused by all of it. Like, is that what it means to be an actor? [It was] about then things really started to change, about 8 years ago, when like the whole idea of tabloids became more tabloids, more in your face. And I’m from L.A., and in L.A. it becomes a really central part of your life [as a young actress] so that was just really weird to me. And as I got older and was in high school doing plays, and I had a great drama teacher, I saw it’s not about that. It’s about doing what you want to do, about working hard and loving what you’re doing. And then I went to college, and New York just seemed like a safer environment for work. So I got over it, but it was something that I definitely thought about and it definitely repelled me for a little bit.

Did you ever consider pulling a Nic Cage and changing your name?

I did think about that when I was really little, like, “I’m going to go by Liz Chase when I grow up!” And then at some point you’re just proud of your family and where you come from. We have a good family, and a supportive one at that. There’s no reason to try and do all that. Martha Marcy May Marlene only gives vague background to Martha and her sister. Did you and Sarah Paulson discuss/agree upon a shared narrative, or were your characters’ backstories more private?

We definitely for one day, for a couple of hours, sat down with Sean and got on the same page. At some point we also had to figure out a timeline because there’s such an age difference between our characters and how that affected her. At the moments when we [meaning Martha and Lucy] weren’t together, she didn’t care what my backstory was, and I didn’t care about hers – like how she met her husband and everything. The things that were shared [in our character’s backstories] was something that we definitely talked thoroughly with Sean about.

What is your favorite cult-adored movie?

Waiting for Guffman. [Laughs] It’s the one I know every single line to. It’s just hilarious, it’s been one of my favorites since – my friends and I literally would quote it for school plays in sixth grade. That’s how much we loved it. I love that movie so much.

What was your reaction to seeing Martha Marcy May Marlene for the first time?

It was my first time watching myself on screen so it was kind of a confusing feeling. It felt just like a moving photo album where like I see a scene and think, “Oh I remember that day where we had this weather and did that that night.” And so it was bizarre. When I actually got to sit back and just watch it was in Cannes, because by then I had enough distance. And first I went through a phase where I thought, “I can’t stand to look at myself anymore.” And then the second was, I was just amazed by Sean. I’m just really, really proud of him. And I think it’s such smart editing and such an interesting film to watch. And I can just step back and really realize it’s the type of movie that I really like to go see. Check out our interview with Sean Durkin and producers Josh Mond, and Antonio Campos here.