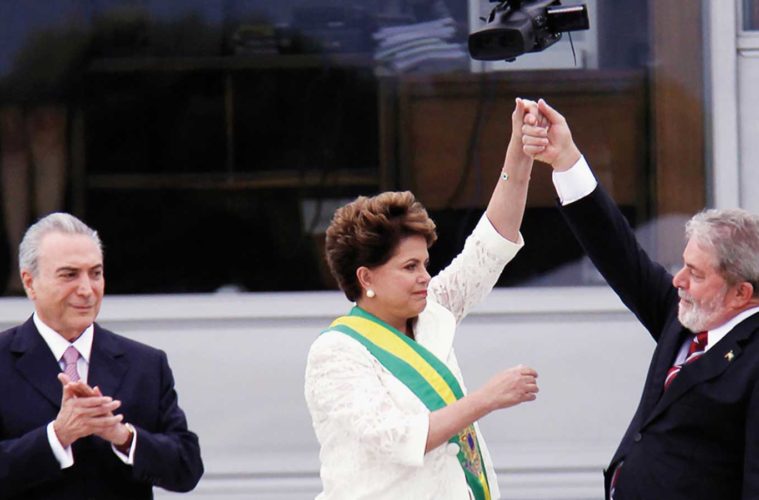 IndieLisboa Review: ‘The Edge of Democracy’ is a Useful Record of Brazil’s Political Nightmare

The Brazilian filmmaker Petra Costa belongs to the many who fear that Jair Bolsonaro’s election as President of Brazil represents the beginning of the end for the country’s democracy, three short decades after the fall of the military dictatorship that held power from 1964 to 1985. In her documentary The Edge of Democracy, which had its world premiere at Sundance a couple of weeks after Bolsonaro’s inauguration on the 1st of January 2019, she probes how the country could replace the Workers’ Party of Luiz Inácio Lula da Silva, whose presidency brought Brazil to unprecedented levels of social and economic prosperity, with a former army captain whose political views and stated ambitions amount to nothing less than fascism.

The film begins on the 7th of April 2018, the night that Lula (as everyone calls da Silva, in line with his man-of-the-people image) is arrested for money laundering and corruption. It then jumps back in time to the final years of the dictatorship and gradually works its way forward to the present. The end of military rule and the democratic period leading up to the new millennium are covered quickly, with the bulk of the film’s running time dedicated to charting the rise and fall of Lula and his successor, Dilma Rousseff, whose patently fraudulent impeachment paved Bolsonaro’s way to the presidency.

By briskly editing together archival and news clips, as well as home videos and more recent original footage, Costa packs a lot of information into almost two hours, assembling a dense yet lucid summary that offers a compelling primer for anyone unfamiliar with recent Brazilian history. However, given the largely prosaic presentation of the material–a handful of de rigueur drone shots notwithstanding–and the fact that most of the information is relayed through Costa’s own voice-over, it’s only rarely that the film manages to be cinematic as opposed to merely instructive.

Costa does attempt to endow her film with a personal dimension by integrating some of her biography into the historical narrative: her parents were militants during the dictatorship who eventually fled into exile and only returned once Lula raised their hopes for change, whereas other parts of her family own a large construction company which belongs to the de facto oligarchy that has been upholding the status quo for decades. That her own family illustrates Brazil’s political divide, and that Costa herself is roughly the same age as the country’s democracy, might make for a poignant parallel, but it’s not one that proves particularly illuminating.

Some aspects of The Edge of Democracy feel like a wasted opportunity. Costa has privileged access to Lula and Rousseff–there are direct and intimate interviews with both–but doesn’t use it to question or at least discuss some of the more ambiguous aspects of their political trajectory, such as the compromises they made with the country’s elite in order to secure power and which Costa identifies as the fundamental mistake that eventually, and perhaps inevitably, led to their downfall. That Brazil is a country long crippled by systemic and institutional corruption is well-known; why the Workers’ Party in almost two decades of effective and popular rule didn’t confront this issue is a question the film doesn’t sufficiently address.

The Edge of Democracy highlights the correspondence between Brazil’s regression towards the far right and that of other countries–the documentary will soon be released on Netflix and when it does, no viewer will fail to think of Trump. This global development has been alarming and mystifying in equal measure and Costa’s endeavor to try and understand how it could have happened is commendable. And yet, while the film provides a useful record of a specific chapter in this ongoing nightmare, as an investigation it comes up with few new insights that can help us make sense of it.

The Edge of Democracy screened at IndieLisboa and hits Netflix on June 19.