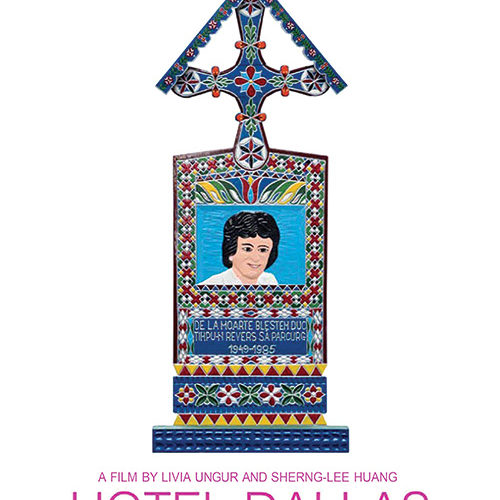 Despite the name Hotel Dallas and general premise surrounding a replica of Southfork Ranch (where both the old and new Dallas series were filmed) built in Romania by an aspiring capitalist, husband and wife directing duo Sherng-Lee Huang and Livia Ungur‘s film is really about a country crippled under its past that’s still unsure of its future. It’s about art and its ability to speak to people’s hearts and souls whether seeking to do so or not. It’s also about a young girl who grew to embrace a vocation that one day allowed her to work alongside her childhood celebrity crush: Patrick Duffy. Part documentary, soap opera-y restaging of history, memory curio, and love letter to home, this art piece is as uniquely informative as imaginatively wild. Do not expect convention or concrete answers beyond philosophical dreamscapes of poetic words trying their best to encapsulate a communal catharsis through the one bit of outside influence Romania was allowed under dictator Nicolae Ceausescu. Don’t even expect to know who anyone is at any given time considering the line between fact and fiction is almost always blurred. Even when it comes to Unger herself — the star of the show — we can’t be sure whether this woman lucky enough to win a free Green Card to the United States is anything but artifice. Is time shifted to show her in American clothing at a desk in New York City simultaneously with her cowboy get-up in Slobozia? Or are these two characters merely variations of her true self?

The same can be said about her father Nicu Ungureanu playing a fictionalized version of himself named Ilie, aka The Sunflower King of Slobozia, aka the J.R. of Romania. Here’s an aging gentleman dressed as Larry Hagman did in Dallas, shimmying and shaking as much as possible with a cane that’s more for utility than aesthetic, telling his story with song. His Hotel Dallas is a dream come true built atop shifty criminal activities as outlandish as the over-the-top delivery mechanism’s theatricality. What’s true and what’s embellished? I would guess everything’s true — the facts are merely shared in inventive ways to cut through the utter despair endured by so many previous to the nation’s revolution. J.R. Ewing is inexplicably rendered heroic 6,000 miles from his Hollywoodized Texas estate. But as I said, Ilie’s inclusion is brief. He’s here because of how integral he and his hotel was to Unger’s life as well as an anecdotal way to explain communist rule to someone from America. His was a world surviving on rations where how much money you had meant nothing. The poor and well-to-do all had to wait hours in line for what they were owed. Nicu had no real reason to do what he did for extra money except the thrill of believing he’d one day live in luxury like the man of bribery and ten gallon hats on TV. Even that success was bittersweet, though, as we hear about the aftermath from the daughter left behind — a woman with a future bursting with promise.

Nicu is the embodiment of the old guard doing what he could under a corrupt dictator. Livia is of the free generation able to embrace a capitalistic world as a right rather than dream. And her mother Steluta Ungureanu provides a figure in-between, one who encourages her daughter’s ambition while remaining true to her heritage and culture at home. Beyond them are philosophical debates from “family and friends” (Crenguta Hariton, Carmen Roxin, Ion Roxin, and Neculai Predica); the stripped down account of sustaining the “artist” title in a big city via Mark Starling; and a few youngsters in uniform playacting a sort of Dallas meets Ceausescu tale of woe. And it’s narrated by Patrick Duffy — the camera lens serving as his eyes on an adventure into the unknown. This journey’s quest is to unearth Romania’s complex history as explained by disembodied voices recounting their experiences while Unger and Duffy seek Constantin Brâncuși‘s famed Infinity Column. We see this sculpture transposed in New York, its sibling Table of Silence made into a sundial to fast-forward and rewind time as footage from John Wayne’s Angel and the Badman plays in reverse. Everything of today becomes a cyclical result of yesterday, one’s success or failure leading towards another’s as though fated to converge from the start. And the one constant — even with Dumitru Pop Tincu‘s comical tombstones illuminated by limerick-like poems at the Laughing Cemetery — is the glimpse into the “good” life the Ewing family provided. It proves humanity’s love affair with insane melodrama, Romania craving it over communism.

If you’re trying to fathom how the sheer scope of so many disparate shifts in storytelling devices can come together in a meaningful way with only 74-minutes of runtime, you may do well choosing a more linear narrative. Hotel Dallas‘ construction necessitates some heavy lifting on your part to parse the densely compacted examples of Unger and Huang’s themes and you will be rewarded intellectually and emotionally if you embrace the challenge. It’s an art piece — unsurprisingly so considering the filmmakers deal in film, sculpture, installation, and performative art outside cinema’s mainstream sphere. Know this going in and have fun. Enjoy their penchant for capturing process and result simultaneously by letting the camera roll after yelling, “Cut.” You ultimately become a participant rather than spectator inside their art.

Hotel Dallas plays Hot Docs on April 30th, May 1st, and May 6th.