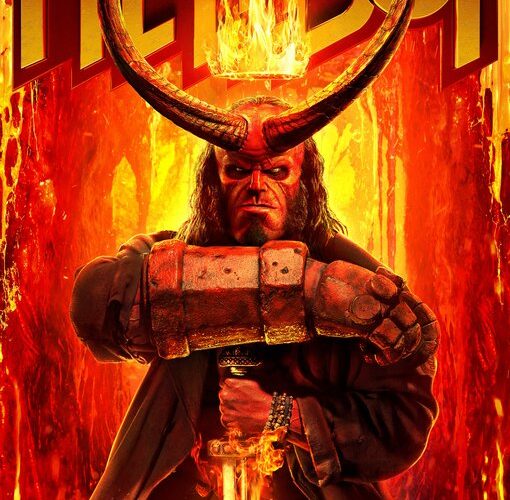 ‘Hellboy’ Review: A Bloody Romp with a Weightless Script

There’s no getting around the fact that Lionsgate did Guillermo del Toro dirty by not extending him an invitation to complete his Hellboy vision with a third film. Whether their decision was due to whatever rubric used to measure the franchise’s success (that they’d willingly reboot the property so soon shows it was viable enough) or creator Mike Mignola wanting to bring things back to where he thought they should be (as was floated around), they turned their back on a soon-to-be Oscar-winning director and thus their star actor Ron Perlman too. This meant a new origin was the only avenue to travel since there would be no reason to continue a story without its storytellers. And with Neil Marshall at the helm, gore could be king.

That’s the real draw here: an R-rating. While del Toro’s films weren’t anywhere near family-friendly fare, they were colored in his sense of fun wonder to at least make them accessible to those children with the maturity to handle the more nightmarish visions within. Where he let the fantasy angle trump the horror, however, Marshall (the man responsible for The Descent and other horror work before an Emmy-nominated run on Game of Thrones) would of course do the reverse. He and screenwriter Andrew Cosby would eschew the bright red toddler being “coochy-cooed” by a bunch of soldiers and instead introduce him as a hell-spawn everyone but Professor Broom (Ian McShane) would murder in an instant. A lot happened these past fifteen years to recolor the character’s environment. So things commence with a war between humans and monsters led by King Arthur and Nimue The Blood Queen (Milla Jovovich) respectively—one that of course leads to a present ravaged by bloodlust and fear-mongering to the point where supernatural creatures killed on-sight are pretty much a stand-in for the unfair generalization that all Muslims are ISIS. It’s this reason that Hellboy (David Harbour) isn’t a de facto hero, but a liability. Besides his adoptive father Broom, the BPRD (Bureau for Paranormal Research and Defense) sees him as an abomination sent to earth as a destroyer and thus a ticking time bomb to that end. It’s why his forced-upon partner Ben Daumio (Daniel Dae Kim) refuses to trust him and why practically everyone on-screen tries to slay him.

It’s the sort of pessimistic bent that makes Hellboy ripe for plucking by a reborn (thanks to a gruesome process undergone with the assistance of a piggish Gruagach voiced by Stephen Graham) Nimue as her equal to eradicate humanity with the Bubonic plague and refashion Earth as a home for supernatural myths free from hiding. That may not be his exact destiny, but it would fulfill the destruction part rather nicely. And since the only people Hellboy can trust are a cold, unfeeling father and an old acquaintance from the past (also inexplicably bound to the Gruagach) named Alice (Sasha Lane) who happens to be in the right place at the right time, there’s not much stopping him from taking Nimue’s offer to ostensibly stop his species’ persecution. Why shouldn’t he with a world against him? Broom might dismiss Hellboy’s generalization that monsters only kill humans because humans are killing monsters as a false equivalence, but the issue is much more complex than that. Just like American politics have more or less created the jihadist extremism that threatens America’s peace, extremism does breed extremism. How long can Hellboy truly believe he’s fighting on the side of good when those he saves refuse to treat him as an equal? Rather than hinge this outsider nature on romance like del Toro’s films, Marshall and company lean on the immigrant experience and the reality that he will never be able to stop proving himself worthy if everyone around him is waiting for the other shoe to drop.

That’s a pretty potent theme to rest this bloody romp upon and honestly the whole might have been better if it stuck to those guns without trying to layer so much other noise on top. Because there’s a lot more going on here than just Hellboy being torn between Broom and Nimue’s indoctrinations. With the Gruagach and Alice comes a fairy subplot. With Hellboy’s origins comes another with the Order of Osiris led by Alistair Petrie’s Lord Adam Glaren and Sophie Okonedo’s seer Lady Hatton (Will somebody please give this Oscar-nominated actor a role with some meat on it again?). Then there’s interjected scenes with Baba Yaga that add nothing but gorgeous atmosphere and creature work and the decision to make the King Arthur legend eye-roll-inducingly crucial. Cosby tries to do so much with his script that very little actually possesses the weight to feel integral to the underlying story. It’s as though the studio knew it had to do a hard reboot but didn’t want to bore us with things we already knew (the Rasputin conjuring is but a brief flashback) even though it’s necessary to understanding the bigger picture. So we get tiny segments of filler threaded together that could have easily been reduced to bolster those portions we need most. It’s tough, though, since this disjointed smorgasbord’s best entertainment arrives from that filler. The casting of Thomas Haden Church as a pompous hero named Lobster Johnson simply can’t be beat despite the character proving little more than comic relief from the start.

So there’s a cake and eat it too attitude wherein this new iteration of Hellboy wants to simultaneously be trashy and dramatic. It wants to merge sarcasm with danger despite them often coming at odds tonally. You can let an interaction with Baba Yaga be fun and stupid without tacking on a curse that describes something we already know is coming like it’s some massive twist of fate. And when the gore is painted so heavy that excess becomes its goal, why not embrace the B-picture quality and leave prestige emotional beats behind completely? Make things trashier because that’s where Harbour’s performance shines and his dynamic with Daimio and Alice excels. The potential for success is therefore visible and a sequel might cement it if one remains possible.

Hellboy is now in wide release.