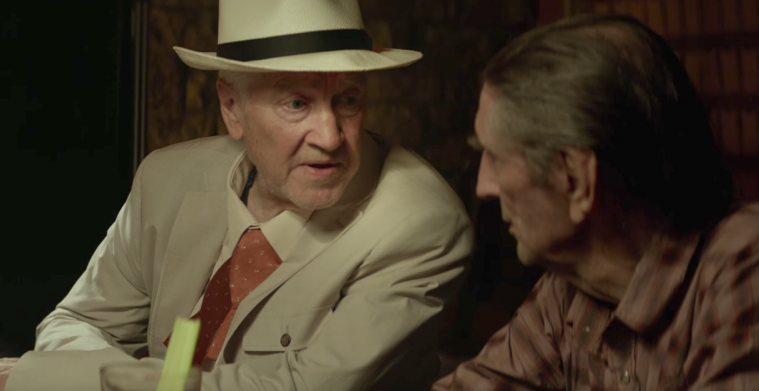 After making a profound impression in Zodiac, The Invitation, Shutter Island, and more, John Carroll Lynch has stepped behind the camera as a director for the first time with Lucky. Led by Harry Dean Stanton, it follows his character on a spiritual journey towards enlightenment as he meets a whole host of others along the way. Following a SXSW premiere and ahead of a release this fall, the first trailer has now landed.

As one can seen in the screencap above, Lucky also reteams Stanton with David Lynch, who pops up in a supporting role. Reviews for the film have been mighty strong since it premiered earlier this year and we look forward to seeking it out this September. Also starring Ron Livingston, Ed Begley Jr., Tom Skerritt, and Beth Grant, check out the trailer below.

LUCKY follows the spiritual journey of a 90-year-old atheist and the quirky characters that inhabit his off the map desert town. Having out lived and out smoked all of his contemporaries, the fiercely independent Lucky finds himself at the precipice of life, thrust into a journey of self exploration, leading towards that which is so often unattainable: enlightenment. Acclaimed character actor John Carroll Lynch’s directorial debut, “Lucky”, is at once a love letter to the life and career of Harry Dean Stanton as well as a meditation on mortality, loneliness, spirituality, and human connection.