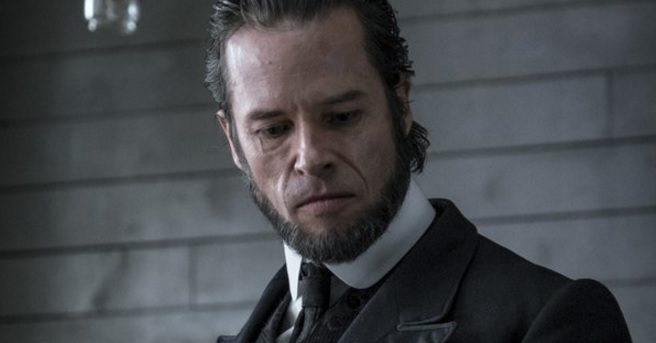 Guy Pearce Gets Religiously Evil in First Trailer for ‘Brimstone’

Premiering at Venice and stopping by TIFF this fall was Brimstone, a new western from director Martin Koolhoven. Starring Guy Pearce as an evil religious zealot as he hunts Dakota Fanning‘s character, the first trailer has now arrived ahead of a likely U.S. release next year. While reactions were mixed from its festival debut, anytime Guy Pearce turns to his darker side, I’ll be in theater and this looks like the ideal scene-chewing performance.

We said in our review, “Ultimately, Brimstone is built on a “feminist” concept in the same way that relentlessly repeating “feminism” until you can only hear disjointed syllables equals talking about feminism. Even worse, this concept only relies on the repeated, repetitive abuse of multiple generations of women in order to emerge, and is diminished by various self-satisfied, cheap-thrills choices that feel badly out of place. Shame, as there was a more articulated, sui generis western in here somewhere.”

Check out the trailer below for the film also starring Emilia Jones, Carice Van Houten, and Kit Harrington.

A triumphant epic of survival and a tale of powerful womanhood and resistance against the unforgiving cruelty of a hell on earth. Our heroine is Liz (Dakota Fanning), carved from the beautiful wilderness, full of heart and grit, hunted by a vengeful Preacher (Guy Pearce) – a diabolical zealot and her twisted nemesis. But Liz is a genuine survivor; she’s no victim – a woman of fearsome strength who responds with astonishing bravery to claim the better life she and her daughter deserve.

Brimstone will be released next year by Momentum Pictures.