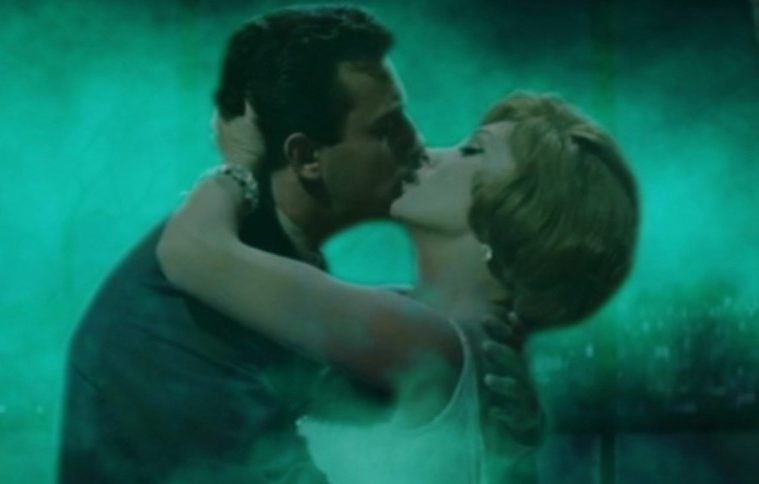 Guy Maddin on Reinventing ‘Vertigo’ with ‘The Green Fog,’ Male Gaze, and the Bressonian Qualities of Chuck Norris “Let mystery have its place in you; do not be always turning up your whole soil with the plowshare of self-examination, but leave a little fallow corner in your heart ready for any seed the winds may bring, and reserve a nook of shadow for the passing bird; keep a place in your heart for the unexpected guests, an altar for the unknown God.”

Jack Palance recites the previous quote in Sudden Fear and it’s the manifesto for Guy Maddin and Evan and Galen Johnson’s new project, The Green Fog. The quote is one of a few lines of dialogue to appear in the film. It’s mostly ‘narrated’ with gestures, the breath between words and a score composed by Jacob Garchik and performed by Kronos Quartet. You hear nods to Bernard Hermann’s score of Hitchcock’s Vertigo throughout.

Commissioned by Noah Cowan for the closing night of the 2017 San Francisco Film Festival, The Green Fog is compiled of clips from hundreds of TV shows and films shot in San Francisco to create a parallel-universe version of Vertigo. The result amplifies some great (but mostly mundane) performances by stripping the original dialogue to focus on the actor’s faces. Maddin said when the Johnson’s removed Chuck Norris’ dialogue in Eye for an Eye, he reached “Bressonian quality.”

The Green Fog comments on Hitchcock’s self-criticism of the male gaze in Vertigo, but the trio don’t provide a precise reason for borrowing Hitchcock’s narrative to celebrate filmmaking in San Francisco. It allows The Green Fog to have a life beyond the San Francisco Film Festival as it plays for audiences in New York City at the IFC Center.

Do you consider The Green Fog an essay of sorts, vivisecting Hitchcock’s use of the male gaze?

Guy Maddin: When Noah Cowan at the San Francisco Film Festival approached us to make a closing night film featuring footage of films shot in San Francisco, we initially started thinking of city symphonies, we weren’t quite sure what to do. Pretty quickly we realized operating from a position of adapting Vertigo, using footage of other movies shot in San Francisco, gave us the freedom to riff on Vertigo the film, and do the kind of things good cine-essays do without the voiceover of a cine-essay.

Evan Johnson: While we were making it I thought of it as something that was making an argument the way an essay might. Like a thesis and antithesis and a synthesizing of arguments with the shot colliding together, saying something about Vertigo and what it meant and what’s dangerous about it. I wasn’t making totally clear arguments in my head with words. Whatever The Green Fog is saying or arguing is kind of mysterious to me still.

Watching The Green Fog, I would say Hitchcock’s use of the male gaze is your thesis and the quote you use by Henri-Frédéric Amiel is the antithesis. Will you talk about the dialogue you create between the two?

Evan Johnson: That quote was from Sudden Fear and Jack Palance is speaking it. To me it’s like a guide to watching the movie itself, almost like a manifesto. The first poster design we had used a part of the quote on it: “Let mystery have its place in you.” It’s exhorting us not to have too much literal-mindedness about what we were creating. It’s also a conversation about whatever we were trying to say about the male gaze in Vertigo. Which again isn’t entirely articulated. Vertigo itself is so self-critical, very honest and cruel about what the male gaze is and does, but at the same time we were thinking it may be nice to make a movie about the male gaze that wasn’t so stifling to the female characters. We were looking for ways away from the male gaze.

Maddin: I loved the scene of the two women discussing the trips to the museum. It’s a peek into Madeleine Elster’s life, what her off-hours might be like and how concerned she might be about what she’s doing. It’s offering a point of view there that Hitchcock doesn’t offer. It’s still doing the same thing what Vertigo is, being self-critical, it offers up a few more points.

How did you decide the breathing between words, facial gestures, background noise and orchestration by Kronos Quartet would set the tone and act as dialogue for the project?

Galen Johnson: Initially it was a practical thing for me to find our version of Vertigo. We had all these scenes filmed in San Francisco totally irrelevant to what we were trying to say. The thing to do seemed to be take it all out. [Laughs]. I wasn’t thinking at the time how cool the breathing would sound.

Maddin: Once you get the dialogue out, suddenly people aren’t talking to each other, but looking at each other. That’s a big difference and that’s more in line thematically with what we were thinking about. Also, people were listening. Listening is a motif that sounds like a broad motif, but since we brought on a composer and a live string quartet, we needed a means of articulating that people should be listening while they were watching the movie. It shouldn’t be underestimated that it made us laugh to take people’s dialogue away from them. The television actors got better! Where they may have had a hard time delivering haphazardly-written, cheese-ball dialogue, suddenly became really powerful and erotic when you took their words away. They were saying so much more with their faces. Instead of adding something to collide with the face, we subtract and just have you look at the face. All those faces are so familiar to you. The lighting styles of so many different eras all loaded into those faces. There’s that sequence with Chuck Norris. When you isolate Chuck Norris without dialogue he has a Bressonian quality. The movie was Eye for an Eye and he’s basically grief-stricken. His partner or mentor has been killed at the beginning of the movie. The mentor was played by Terry Kiser, who played Bernie in Weekend at Bernie’s.

Did you create the background noise for the scenes you used?

Evan Johnson: Yes, we added a lot. There’s certain scenes where we have to match the ambiance of the scene and re-layer it over the entire scene. Cutting out the dialogue isn’t always so simple. Half of the shots of someone’s face where they’re listening to someone else’s dialogue, we had to replace the ambient restaurant or street noise, and we would have to re-add or add sound effects that weren’t there. The shot in The Green Fog from The Towering Inferno, Paul Newman slams a car door but it didn’t make that sound, so we added it. It’s the perfect slam, so we were fixing the mess-ups of other, lazier editors. [Everyone laughs]. We had to do a lot of work to make the dialogue cutting as seamless as we want it to be.

How did you secure the rights to seemingly hundreds of TV shows and films?

Maddin: One other major collaborator was a fair usage lawyer in San Francisco. My job was to talk to this fair usage lawyer while Galen and Evan were editing in Winnipeg. I had to describe to her how much we were using and how we were using it. I learned a lot about fair usage. It’s just the matter of a lawyer drafting up a letter of plausible arguments for a judge, then the movie can get insurance and proceed. According to contemporary conventions of fair usage, we didn’t use too much from any one source. I talked to Bill Morrison about Dawson City: Frozen Time where he was paying for rights to things and he told me recently he regretted doing that because he found out later he could have used it under fair usage laws.

Speaking of Dawson City: Frozen Time, Galen, I saw that you designed titles for the project.

Galen Johnson: I met Bill Morrison at the New York Film Festival and he liked The Forbidden Room’s titles. He said he was working on a project and he asked if I was interested. I didn’t really do all that much. He had a pretty solid rough cut of the movie and he had written all of the text. I just came up with the typography of it.

Did you have any nervousness about releasing the project beyond the San Francisco Film Festival? I read Tippi Hedren compared Harvey Weinstein to Alfred Hitchcock.

Evan Johnson: It didn’t occur to me to have those kind of nerves. I felt a couple of layers of defense. Vertigo as a movie is critical of Hitchcock’s entire method and his male gaze issue. On top of that, we were trying to intensify that criticism and find ways around ‘male gaziness’. And we weren’t trying to be heroes about it either. We had a quick deadline and not much time and were just concerned with small formal problems and then suddenly the film was finished. We wanted to delight ourselves, we wanted to make ourselves happy. Tippi’s probably right about Hitch. Sounds like he was a dubious character in a lot of ways. I don’t feel defensive of Hitchcock in any way. His films have taught me and I think I’m at a place where I’m ready to criticize Vertigo and complain a little bit. I’ve seen it so many times now, its initial devastating effect on me has worn off and it’s sort of fun to complain about it. [Laughs].

Maddin: It has crossed my mind a little bit. I don’t want to joke about it, but I like like Evan said, everyone has an opinion on Vertigo in regards to the male gaze. This one does play with that in ways I don’t think are obvious but at least is a step back from that dangerous territory. We’re not really interested in that stuff. We had lot of movies we could have pulled from and intensified the male gaze but it didn’t occur to us to do it.

The Green Fog is now playing at IFC Center.