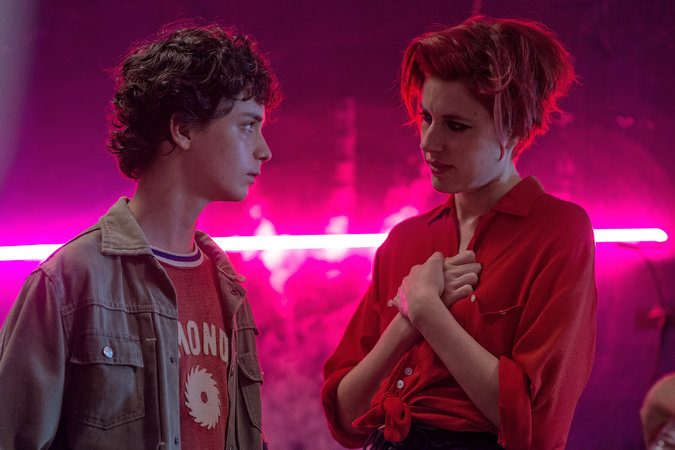 There’s a restlessness associated with Greta Gerwig’s characters that’s nowhere to be found in Abbie, the young cancer survivor she plays in Mike Mills’ 20th Century Women. Rather than having Abbie show her unique worldview through kinetic expression, Gerwig allows her introspective moments to do the talking. Through her obsession with photography and art, we see Abbie trying to create a legacy, and a self-portrait: she’s angry about being sick, but realizing this means there’s no time left to waste. Even though at first Abbie doesn’t seem to speak much, Gerwig uses her face to communicate what’s going on inside her. It’s a strangely delightful contrast to the whimsy Gerwig usually infuses her characters with. Even though Abbie couldn’t seem to be further from Frances, Violet Wister, and Brooke Cardinas, she’s bound to them by the magic of Gerwig.

The actress had a banner 2016 with unforgettable performances in four films, Maggie’s Plan, Wiener-Dog, Jackie and Women, the latter particularly bringing her universal acclaim and awards from critics groups. With both Women and Jackie opening during the peak of prestige film season, it’s great to see how they are showcases for Gerwig’s versatility. While her Abbie in Women dreams to have the world understand her, as Jackie O’s Social Secretary and confidante, Nancy Tuckerman, in Pablo Larraín’s impressionistic biopic, she’s a woman loyal to the secrets of others. Her Tuckerman exudes the kind of warmth that makes us wish we knew more about her character after the film is over. When I spoke to Gerwig on the phone, she was quite eloquent about creating these two characters, working with Mike Mills, and she mentioned having wrapped up her directorial debut Lady Bird — but not being ready to speak about it with the world just yet, she wanted to keep it to herself a little bit longer.

The Film Stage: Abbie was based on Mike Mills’ sister. Did knowing this restrict or open up the places where you could take the character?

Greta Gerwig: Knowing that it was based on Mike’s sister was only helpful to me because, first of all, she was incredibly generous and talked to me, which was very helpful. Also, any point of contact with reality for me is what makes characters rich, deep, and resonant. I loved it.

There is something very tactile about Abbie’s passions, from her record collection to her photographs. Do you think she’s a character obsessed with physical permanence and objects because she’s ill?

I definitely think that having cancer makes her see herself as an object that could pass. I think the cancer feels like a foreign object taking over her, so that’s all really resonant and layered in the film. That’s a great read on what it is.

Can you talk about how you connected to Mills’ music choices for your character?

I loved Mike’s music choices. In preparing for the role really early, he gave me a bunch of music, in addition to art books, photography lessons so I could learn to use those cameras, feminist writing, and arts writing from that time. I loved the music. I knew a lot of it because I love that era, the David Bowie glam-rock world, but what I didn’t know about was the more hardcore scene of the punk movement. I’d never listened to Black Flag. I didn’t know The Slits or The Raincoats and other female punk bands. In a way, it’s what you hope a director will do, which is to push you out of your comfort zone and see the world differently through the eyes of the character. I adore the music in the film and think it’s so lucky all of them allowed for their music to be in the movie.

The women in the film made me think of Baroque paintings, where you would see the different ages of men represented within one frame. Can you talk about working with Elle and Annette, who, in a way, each represent a different age of women, and if their characters made you reflect on your own character differently?

Abbie is quite communicative, which made me think of how Nancy Tuckerman in Jackie: the opposite, as she’s someone who was well-known for keeping secrets. How do you access someone like that?

In a way, that was a big part of the key to her character — which was her silence, she was not someone who talked about her personal involvement and the things she knew. That’s how I created the character. I didn’t have a lot of time to make Nancy the way I did with Abbie. A lot of it was picking up things I learned about Nancy by reading about Jackie. Nancy didn’t speak for herself. She spoke for Jackie, and, when she died, Nancy Tuckerman wrote the press release which showed a loyalty from another time.

You’ve talked about carrying bits of characters with you. As you went from Women to Jackie, traveling back in time so to speak, did you bring any of Abbie to Nancy?

I shot 20th Century Women first and then I shot Jackie, and in a way it was a good way to say goodbye to the character of Abbie. It was a different decade, different costumes, a different woman, another country, since we shot most of it in Paris. It felt like I could kind of go into another imaginary world. But I will say, Mike told us, when we finished Women, that we would do reshoots, so I knew that I could come back to Abbie, so I didn’t feel like I was letting her go. Shooting Jackie in Paris, we took a break and then shot the rest in DC, so with both characters I had the sense of quite not letting the characters go, even though we were wrapped. Which was nice, because it felt like less of an abrupt ending.

Both Jackie and 20th Century Women touch on grief, particularly a woman’s grieving process. How do you think the films will be perceived in a country that’s undergoing a period of grieving and uncertainty?

It’s funny: both of the films have taken a new resonance because of the election, so I think the feeling before the election and now for both movies has really transformed. For 20th Century Women I think that, specifically the Jimmy Carter speech — which is one of the centerpieces in the movie — lands differently. It’s a very prophetic speech and we’re experiencing the flipside of what he said, which is this drive for consumption and wealth for wealth’s sake is a disease and a malaise for our modern culture. With Jackie this idea of using the media to shape a hero, or a presidency is something that we’ve surely seen how it spun out in this moment. Those things are very resonant, in terms of grief, I think I resonate with the movies more as a portrait of personal grief, rather than national grief. But the personal is political.

20th Century Women and Jackie are now in limited release.