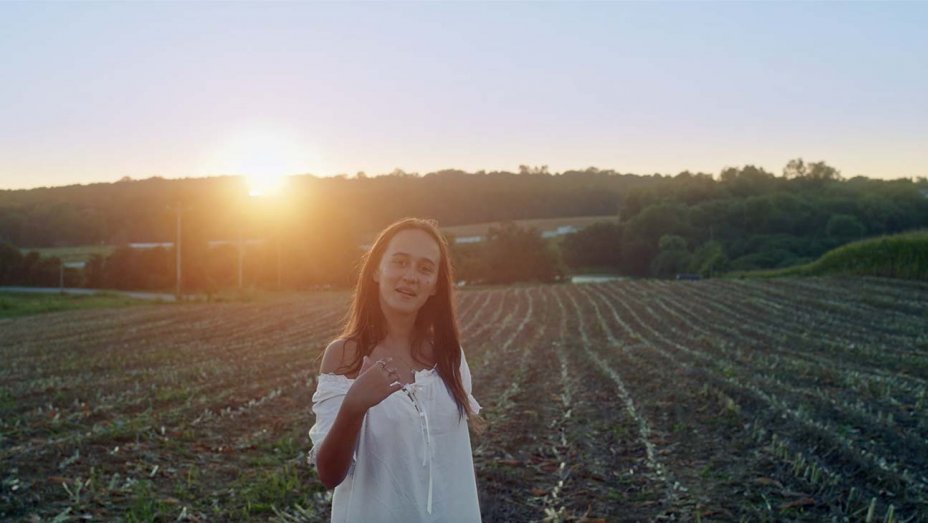 The final days of suburban American high school provide the backdrop to Giants Being Lonely, a box-fresh cut of expressionistic filmmaking from debut writer-director Grear Patterson, a visual artist whose work to date has focused on a kind of post-modern Americana–a stylistic background that translates efficiently to the screen. Produced by Olmo Schnabel (son of Julian, and paying the bills) and shot beautifully by Patterson himself, Giants tells of a love triangle between three of the school’s students: the gifted pitcher of the baseball team, his coach’s less talented son, and a relatively affluent girl in their class.

Patterson has stated that Giants is autobiographical to a point, although his film, for better and worse, is far less of a nostalgic blow-by-blow memoir than the likes of, say, Lady Bird, but more a sensory memory of the time–taking place, as it does, in a palpably hot, humid, and hormone-filled summer. Brothers Jack and Ben Irving (friends of the director, each in their first screen appearances) play Bobby and Adam, the pitcher and coach’s son respectively. Bobby is the town’s rising star–his esteem amongst the local booze hounds only bettered, it seems, by his esteem amongst the local housewives. Adam is the tropey, less-gifted introvert who struggles to live up to his father’s expectations. (Dad is played excellently by Gabe Fazio, who leans more toward R Lee Ermey than Coach Carter). Caroline (Lily Gavin) is the apple of both Bobby and Adam’s eyes, and the feeling seems mutual.

There are few more well-trodden time periods in American independent filmmaking than this one, not least for first-time directors. However, the well has yet to run dry–rich as it is with all the approaching promise and anxieties of college, as well as the melancholy of outgrowing one’s sheltered youth (not to mention the heightened libido). Giants manages to plant its own flag thanks to Patterson’s hyperreal aesthetic–which uses digital imagery to create an almost surrealist clarity; one that offers its own convincing case for the underrated beauty of digital filmmaking. It at least makes a case for the possibility of cinema as an ASNR experience; no doubt intentionally given the artist’s background.

Patterson has made a confident debut here that is frankly not without its flaws or pretention: trendy kids read battered paperbacks on the bleachers; a teacher is overheard introducing Bobby to Joan Didion–you know, that sort of thing. The sense of ostentation can be gnawing at times, too. (Schnabel’s name–and privilege–is placed front and center.) If we can presume the film to be set some time in the mid-naughties, the period detail also warrants some skepticism: there are no mobile phones, for one–although Patterson would not be the first to use directorial license to omit the technology. More glaring yet are the music cues which, excellent tunes as they are, are at times a touch hard to believe. Surely suburban prom DJjs of the era were playing Akon and not Bronski Beat?

Regardless, Giants introduces a strong new voice in American independent filmmaking. Just sit back and enjoy the hues and the hormones as Adam skates around the roller disco; or the woozy, druggy ecstasy Patterson creates as a character pitches a perfect game. Patterson’s second-to-last shot would not look out of place in recent Gasper Noé. It is just a shame about the one that follows.

Giants Being Lonely premiered at the Venice Film Festival.