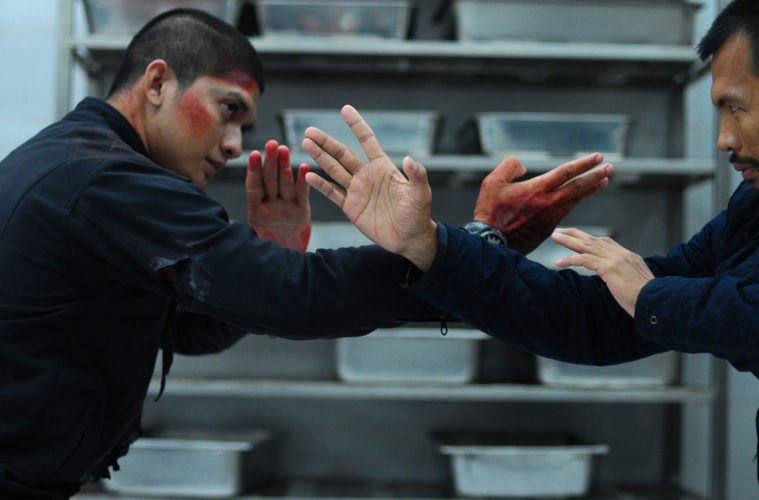 When it premiered at Sundance Film Festival earlier this year (my review here), The Raid 2: Berendal rocked the Park City audience out of their seats with its audacious fight sequences and uncompromising frenetic energy, not to mention a ludicrously absurd body count. Having garnered a legion of fans with its original incarnation The Raid: Redemption, Gareth Evans, the Welsh-born filmmaker whose made his last three films in Indonesia, returns with a grander vision of gangsters, assassins and mayhem.

The complicated shoot, which lasted over seven months was an intense exercise in filmmaking for Evans and his team, but one can feel their hard work bursting from the screen as some of the most exciting action scenes you’ve ever witnessed unfold. I was fortunate enough to sit down one-on-one with the film’s star Iko Uwais, who bravely spoke English with me despite having a translator, even showing off a few moves. We also talked to the charming, yet deadly, Hammer Girl Julie Estelle, who talks about her process, including puking on the first day of training.

Lastly, we spoke with the mad maestro himself, Gareth Evans, who not only wrote and directed the film but also edited it, oftentimes on set during production, immediately after the shots had been captured. One can hear some great stories from the production, advice for action filmmakers, why Evans hates sequels, his love for Sam Peckinpah and John Woo, and watch how they pulled off some of those amazing shots. He also discusses his thoughts on the Hollywood remake and what to expect for The Raid 3, so check it out below, and we’ve also embedded an extended deleted scene, filled with more action you won’t see in theaters.

The Raid 2 is now in limited release and will expand throughout April.