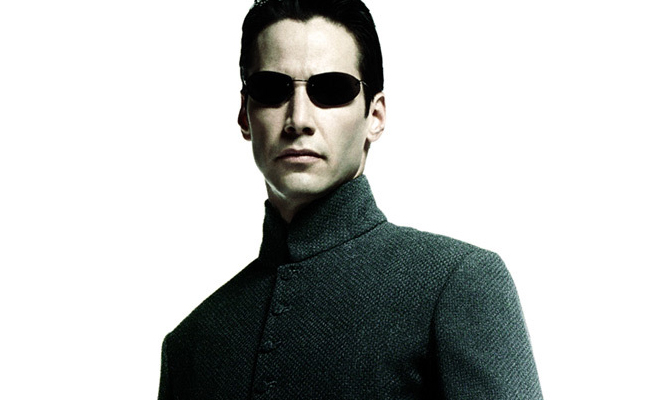 From Neo Himself: Two More ‘Matrix’ Movies On Their Way? It makes sense in a cosmic sort of way that in the midst of Sundance 2011, Keanu Reeves would start a rumor that the Wachowski Siblings‘ legendary, zeitgeist-y franchise started by 1999’s The Matrix will continue with two more installments. [FirstShowing, via Aint It Cool News]

While promoting his new movie Henry’s Crime in London, Reeves spoke about quite a few projects in his pipeline. Should we be surprised that the Wachowskis have decided to follow up the blatantly sequel-baiting ending of 2003’s The Matrix Revolutions? Especially considering that they’re one directorial follow-up since then, 2008’s Speed Racer, was one of history’s epic flops?

The answer, of course, is a flat, resounding NO. I’m ignoring the quite underrated V for Vendetta, which the Wachowskis wrote and produced, but did not direct (that one was helmed by their Matrix trilogy assistant director, James McTeague, and goddam if he didn’t knock that one out of the park.)

The details? Here’s what “El Nino” from AICN has to say about the next two Matrix installments:

– Says he met the Wachowski’s (no emphasis on the word brothers), for lunch over Christmas and stated that they had completed work on a two picture script treatment that would see him return to the world of the matrix as Neo. Says the brothers have met with Jim Cameron to discuss the pro’s and con’s of 3D and are looking to deliver something which has never been seen again. keanu stated that he still has an obligation to the fans to deliver a movie worthy of the title “The Matrix” and he swears this time that the treatment will truly revolutionise the action genre like the first movie. Wachowski’s are working on a movie called “Cloud Atlas” at the moment, once that concludes they will talk again.

I’m pretty sure I don’t need to remind our readers that the “Wachowski Brothers” are technically no longer brothers, ever since Larry Wachowski has become a transgender named Lana. What the hell does this have to do with anything? Nothing, really, save for reports that the former Larry Wachowski’s obsession with his “alternate lifestyle” is at least partially to blame for the uneven (at best) quality of The Matrix Reloaded and The Matrix Revolutions, neither of which lived up to the promise of their brilliant, society-changing original.

Look up this Rolling Stone article for more sordid details. There are other projects on the Wachowski front:

– Keanu spoke about the need to encourage writers to continue to focus on working on new ideas and that a good script was worth its weight in gold. For example he said the Wachowski’s had just sold the most expensive script in history to Warner Brothers. a modern futuristic take on the legend of “Robin Hood”. Says he understands WB paid $5 million for the rights and that from what the wachowski’s have told him, it will be an action movie that would have the same impact visually and technically that Terminator 2 had. Confirmed that Will Smith has agreed ti headline the picture.

If it sounds a little crazy to be true… well, it might be. The Ridley Scott treatment of Robin Hood starring Russell Crowe didn’t exactly set the box office on fire, although I liked it quite a lot. It’s been seven years since we last heard from Neo, Morpheus and Trinity, but I still know the names. Like it or not, The Matrix and it’s population of techno-misfits has lodged itself into our collective unconscious.

Would you bet on a fourth and fifth Matrix chapter? Is this franchise still memorable or relevant?