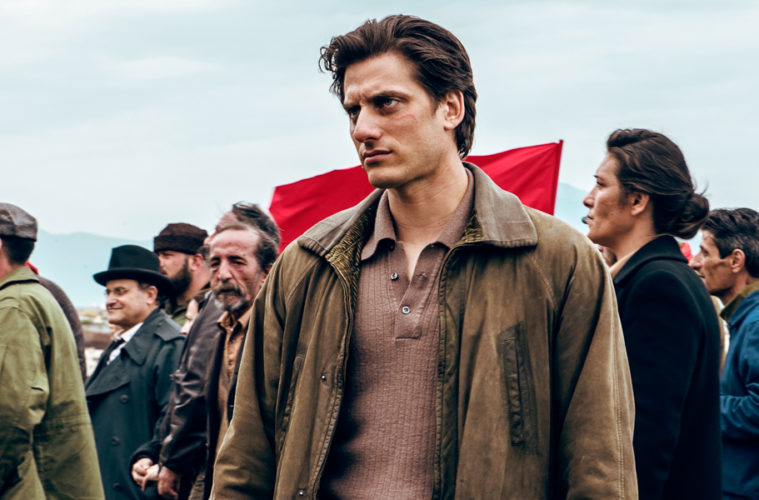 An official selection at the Venice and TIFF (where it won the top Platform prize), The Match Factory has released the first international trailer for Pietro Marcello’s adaptation of Jack London’s Martin Eden ahead of its North American premiere at this year’s New York Film Festival. The first preview also comes on the heels of Kino Lorber picking up the film for a U.S. release.

The film transplants Jack London’s seminal semi-autobiographical novel from early 20th century Oakland, California to Naples, Italy while keeping the engrossing plot intact. Luca Marinelli stars as the handsome sailor Martin Eden, who aspires to become a writer to rise above his station and earn the affection of a young university student Elena (Jessica Cressy). We follow him from lowly sailor to published author who eventually grapples with philosophically based political upheaval and destructive anxiety over his newfound circumstances.

Jay Weissberg from his review in Variety writes, “Where he (Marcello) succeeds brilliantly is in certain compositions, especially those mimicking a 1970s aesthetic with blue and red period tonalities that match so perfectly with some of the found footage that at times it’s difficult to tell them apart… This mix of epoch and form — handheld closeups followed by a more formal cinematic language yet largely beholden to a New Wave aesthetic — offers much to admire even when it tips into indulgence; in the end though, the film suffers from Eden’s own weighty intellectual pretensions, railing against society without finding the means to articulate the argument.”

See the international trailer and poster below.

For the past fifteen years, Pietro Marcello has been working at the vanguard of Italian cinema, creating films that straddle the line between documentary and fiction, but which play off both a 19th-century Romanticism and 20th-century neorealism in their class-conscious focus on wanderers and transients. Marcello’s most straightforwardly fictional feature to date, Martin Eden is set in a provocatively unspecified moment in Italy’s history yet was adapted from a 1909 novel by American author Jack London. Martin (played by the marvelously committed Luca Marinelli) is a dissatisfied prole with artistic aspirations who hopes that his dreams of becoming a writer will help him rise above his station and marry a wealthy young university student (Jessica Cressy); the twinned dissatisfactions of working-class toil and bourgeois success lead to political reawakening and destructive anxiety. Martin Eden is an enveloping, superbly mounted bildungsroman.

Martin Eden plays at the 57th New York Film Festival on October 6 and 7.