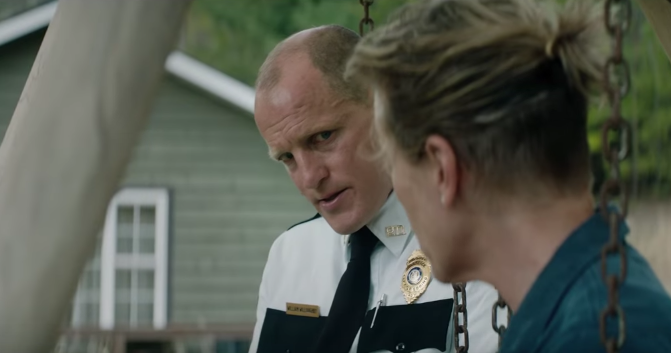 His 2008 dark comedy In Bruges topped our list of the best comedies of the century so far and now writer-director Martin McDonagh is finally returning five years after Seven Psychopaths with a new film. Ahead of a release later this year by Fox Searchlight, the first trailer for Three Billboards Outside Ebbing, Missouri  has arrived, but be warned: it’s red band due to a plethora of euphoric cussing.

Starring Frances McDormand, Woody Harrelson, Sam Rockwell, Abbie Cornish, Caleb Landry Jones, Kathryn Newton, Peter Dinklage, John Hawkes, and Lucas Hedges, the film follows a 50-year-old woman whose daughter is murdered and she goes to war with the police in her home town, because she thinks they are more interested in torturing black people than getting justice.

THREE BILLBOARDS OUTSIDE EBBING, MISSOURI is a darkly comic drama from Academy Award winner Martin McDonagh (IN BRUGES). After months have passed without a culprit in her daughter’s murder case, Mildred Hayes (Academy Award winner Frances McDormand) makes a bold move, painting three signs leading into her town with a controversial message directed at William Willoughby (Academy Award nominee Woody Harrelson), the town’s revered chief of police. When his second-in-command Officer Dixon (Sam Rockwell), an immature mother’s boy with a penchant for violence, gets involved, the battle between Mildred and Ebbing’s law enforcement is only exacerbated.