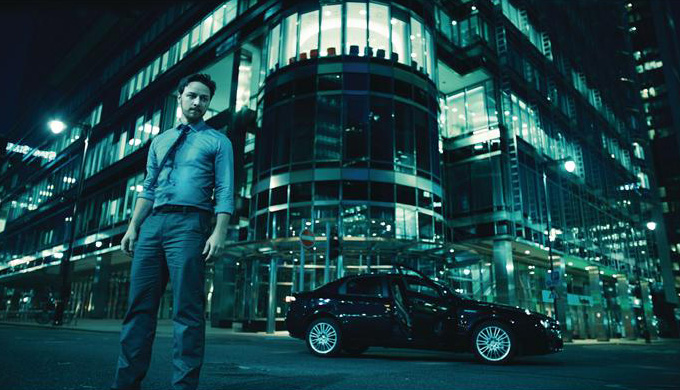 James McAvoy is already a veteran of big-budget blockbusters (Wanted, X-Men: First Class), prestige movies that are better than they should be because of his performance (Atonement), and he’s got Danny Boyle‘s 2013 offering, Trance, lined up along with the adaptation of Trainspotting author Irvine Welsh‘s similarly-cheery Filth. Then there’s the extremely-indie, low-budget UK thriller Welcome to the Punch. You can get a first look at McAvoy above (via ScreenDaily).

He looks… well-dressed in that picture. Really, that’s all we have to go on besides the synopsis: “The film is an action thriller about a London detective (McAvoy) and an ex-criminal (Mark Strong) forced to return from his Icelandic hideaway, who become allies in a bid to expose a high-level conspiracy.” Shades of The Girl with the Dragon Tattoo‘s sequels’ storyline there, but, anyway, I’d like to see McAvoy go eyeball to eyeball with Mark Strong; sounds like fun.

Written and directed by rising Brit filmmaker Eran Creevy (Shifty), Welcome to the Punch has been produced and financed by several European and U.S. companies, including IM Global, Scott Free London, Alliance Films, the Brian Kavanaugh-Jones-run Automatik, and Worldview Entertainment. After a bidding war to acquire the script, the film’s look is being compared to Michael Mann‘s Collateral. The bigwigs involved seem pretty confident they’ve got something special on their hands:

“I had seen Shifty and was a fan of the film but Welcome to the Punch was a very different thing. Though the film is a leap for Eran, his passion and intelligence impressed us immediately. The screenplay was very slick, clever, commercial and fast-paced.”

The ScreenDaily article contains tons of details on the film’s production, but no solid word on a release date. According to a tweet by Creevy, he’s aiming for a March 3rd opening. (And his girlfriend is due to deliver their first child on March 2nd. So he’s got a lot going on at the moment.) Could they be trying for a SXSW screening? Here’s hoping, because the promise is definitely there.