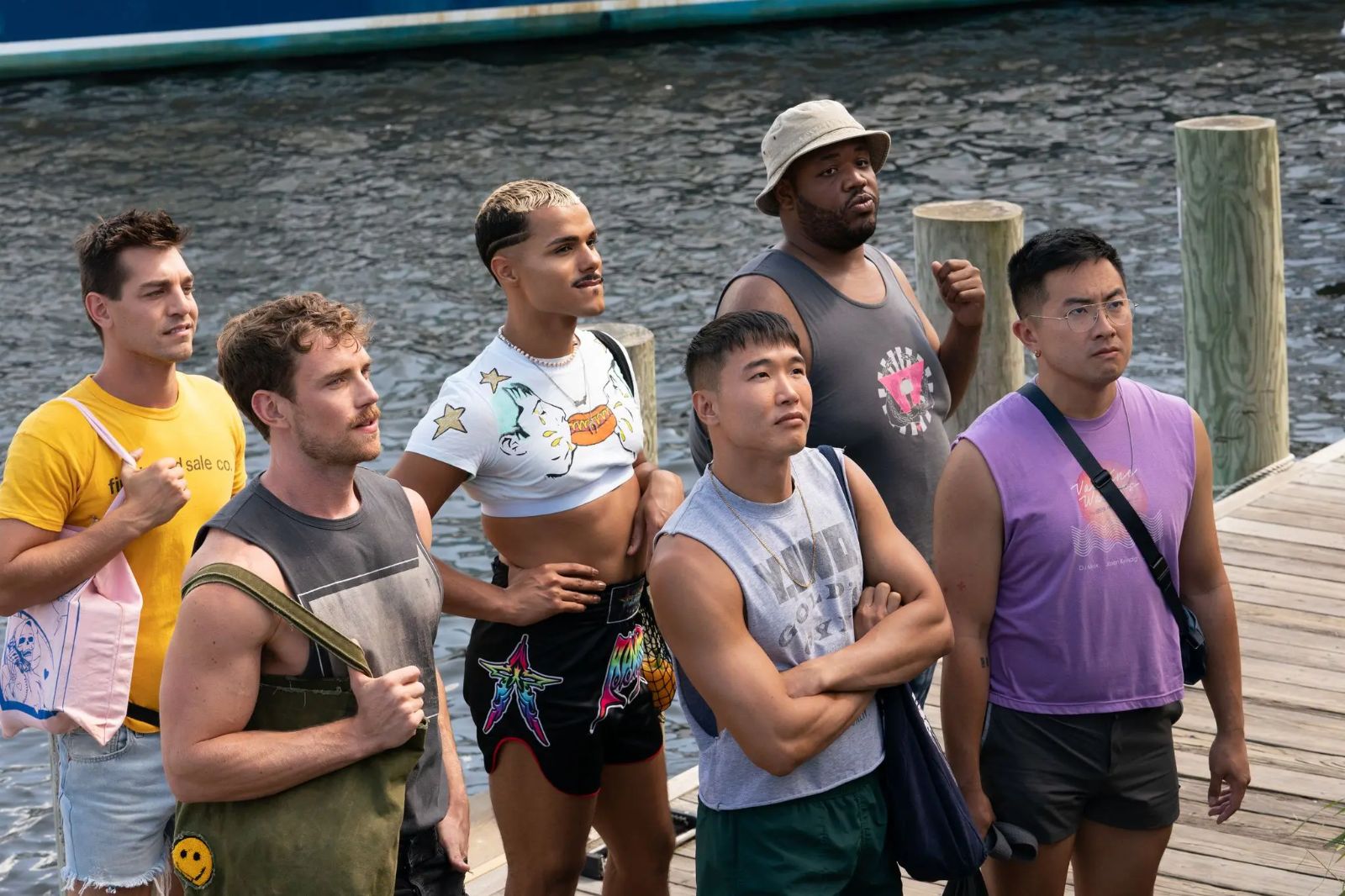 Over the last few years Andrew Ahn has cemented himself as one of the most promising talents in American independent cinema. His first feature, the underrated Spa Night, was an incredibly moving and personal look into a closeted Korean-American man’s struggles with his sexuality and the duty he feels towards his family. Ahn’s empathetic sensibilities were further amplified by his follow-up Driveways, which offered a blend of personal and communal specificity. He’s proven his skills as a quiet dramatist, able to convey the burdens and tragedies of life without pivoting over into melodramatic flourishes—a naturalistic world-building reminiscent of Patrick Wang and Kelly Reichardt, though with a gentler, somewhat simpler touch.

This makes Fire Island, his third feature, a particularly interesting pivot. Instead of being another quietly emotional character piece he’s delivered a joyous romantic comedy, filled to the brim with bright colors, broad comedic beats, and scantily clad bodies. Instead of being centered on the closet or the potential queerness of its protagonists, this film is nakedly about rambunctious queerness, the beauty and discomfort that comes with being out and proud. On the surface it marks a notable change in direction for Ahn, but contains the same intricate character dynamics as his previous features, even if they’re approached in a different manner.

Fire Island is primarily a retelling of Pride and Prejudice. In a similar vein to Clueless, the masterful modernization of another Jane Austen novel, Ahn and writer / co-lead Joel Kim Booster have updated the classic romance novel with a fresh twist. Flipping the script on the 19th-century England-set tale involving straight white people, Fire Island marks a 21st-century, entirely queer, racially diverse interpretation. Focusing on Noah (Booster) and Howie (Bowen Yang), gay Asian-American best friends who are taking their annual vacation to Fire Island along with a group of their other friends, they are in search of sun, alcohol, and good sex, not expecting love to come over the horizon.

Taking advantage of the searing sunshine and luscious beauty of its locales, Ahn’s skill at fleshing out locations only partially continues here, lacking some of the intricate sense of place he’s established in his previous films. The island is supposed to be a place these characters visit every year, embracing the vividness of their home away from home, but it largely feels like a glinty screensaver. There are a few quiet moments throughout where there is a sense of dreaminess, but largely a certain allure of the island is missing. The appeal of the island as a place of paradise never comes across in texture, these pleasures entirely on the surface.

This element is easier to overlook due to the brilliant chemistry between Booster and Yang, whose rapport is incredibly easy and entertaining to watch. Their relationship feels genuine and adds a stability that holds the picture together. The central conflict over their friendship status is a solid dramatic hook, even if it occasionally feels a little obvious in delivery. Booster’s narration can be unnecessarily detailed and has a few notably clunky lines (a particular one involving the f slur not working in the least), but his physical performance is largely excellent and he has obvious leading-man charisma. Yang is certainly his best scene partner and works well with the majority of the cast, having a lovely dynamic with his maternal figure Erin (a great performance by Margaret Cho). Between them is a genuine repertoire that’s lovely to watch.

Outside stilted narration, the comedy is quite sharp, with lines about Quibi and Ex Machina ringing particularly funny. Ahn also leans into an R rating, and certain explicit moments result in cackling—a double-edged shame considering its been relegated to a non-theatrical release. Pacing is breezy and this interpretation of Pride and Prejudice is mostly successful, coming to the realization of who was representing each character as the film progressed. The only major issue in this regard is that romantic interests don’t completely work. Friendship dynamics are significantly more compelling and the attempt to replicate the stoicism of Darcy in the character of Will (Conrad Ricamora) ends up feeling stilted instead of being a true enemies-to-lovers arc.

Fire Island’s greatest strength is its portrayal of queer community. It is undeniably moving to see a mainstream comedy entirely populated by queer characters, no less in a narrative that promotes their happiness and entertainment. It is a life-affirming, comforting work that provides escapism and euphoria in equal measure without overlooking the real issues that queer people of color can face in the community. The protagonists’ race is fundamental to the way they’re perceived and the film does make an effort to expose the underlying (at times blatant) racism in large swathes of the queer community. It wants to talk about the ways queer people directly affect each other, whether that’s in a romantic, platonic, or harmful manner. Despite being a touch didactic in delivery, it’s preferable to simply not addressing the racial issues faced within the community. The decision to avoid straight characters means that there are no direct instances of homophobia, which feels right; not every narrative about queer existence should be built around the hate they may face for existing.

The film is also unequivocally sexual and unashamed of some characters’ desires for casual, non-monogamous love. There is an embrace of all consensual forms of romantic and physical entanglement, not shaming any of its men for just wanting physical pleasures or if they’re only looking for monogamy. It is a decisive shift from the sexless, hollow representation that populates the vast majority of Hollywood’s depictions of queerness. Not all gay men are the same, and Fire Island embraces the differences within the community instead of trying to force universal conformity.

Though lacking some fine points of Ahn’s past work, he’s crafted a very funny, sweet, and inclusive romantic comedy with excellent performances. If Fire Island doesn’t reinvent any wheel, this is a comfortable movie that will likely bring a lot of joy to queer audiences and beyond. At a time when fear is overwhelming for so many, it’s nice having escapism that sees queerness as the beautiful thing it is, prioritizing celebration over suffering and believing in a more accepting world for the next generation. A single film won’t make everything better, nor should it be tasked to, but it’ll likely put a smile on plenty of faces. This counts for something.