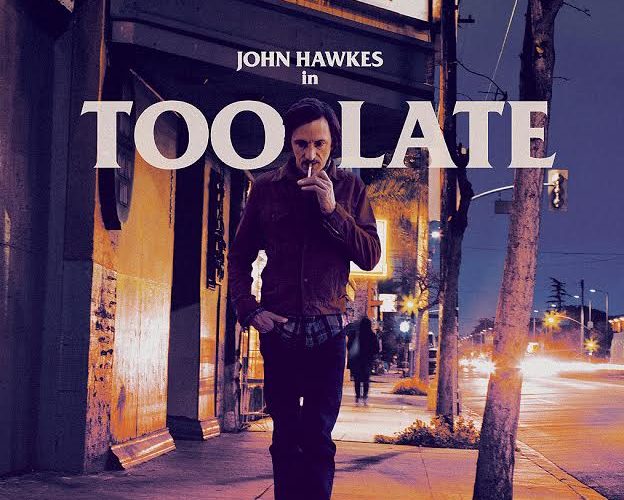 A seedy Los Angeles-set crime caper filtered through an Elmore Leonard novel is where you might find Dennis Hauck’s debut feature film Too Late. Presented out of sequence as five unbroken twenty minute shots, the film has an undeniable theatrical quality, with each scene feeling like an act of a play being performed out of order. And it’s all shot on 35mm film, giving it that unique grainy texture, all while giving credence to the fact that Hauck is paying tribute to the vintage era of cinema. A bit reminiscent of John Herzfeld’s Two Days in the Valley, the tale is woven from several different perspectives of an ensemble cast that all come nicely together at the end to complete a compelling puzzle. While there is a definite fetishization of Tarantino-style dialogue, characters and even plotting, Too Late does an admirable job of paying homage to this method while also offering a taste of something new.

Unfortunately, the first pre-title reel is definitely the film’s weakest and is such a bitter parody of LA-set dialogue that it’s not surprising to turn people off. Dorothy (Crystal Reed), a doe-eyed beauty, wanders the hills of LA while waiting for a friend. She is approached by two overly smug drug dealers (Rider Strong and Dash Mihok) who casually offer her some ecstasy before leaving her alone with a creepy park ranger spouting all sorts of meta-cinema nonsense. After this initial overwrought set-up, the title card hits — Jackie Brown font and all — and by this point Hauck has shown where his interest lies. Fortunately, the film’s pulpier noir elements and mystery become more fully realized the deeper the story plods along.

It’s not until we properly meet our central protagonist, a witty private eye named Sampson (John Hawkes), does the movie shift gears into a more balanced rhythm with a bit of gravitas. This terrific performance from indie darling Hawkes is the glue that binds each separated scene. His candor, humor and heartfelt emotion keep one connected to the emotional stakes of these characters, as the mystery unspools with each reel change. It’s a bit of a shame though that many of the other characters, mostly female, feel one-note and oftentimes exploited. At its worst, there is a lengthy exchange where a drugged-out wife (Vail Bloom) of strip club owner (Robert Forster) flirts with Sampson, so delirious that she has no pants or underwear. It doesn’t help either that most of the other female characters are strippers and parade around in skimpy outfits, even outside of the club.

The film tends to meander through these situations, always in real time, slowly offering clues to the identities of our many characters. This pacing is deliberate because it lets Hauck’s heightened dialogue simmer and take the main stage, beyond the somewhat dubious plotting. As the film reaches its conclusion, there are a few particularly resonant moments, particularly with actress Natalie Zea, as the mother of the missing stripper, who has an intense confrontation with Sampson where she bares her withered soul. Undeniably ambitious, Hauck’s debut is a fascinating study of genre homage and cinematic technique that wears its heart on its sleeve, even if it’s not always aware of that fact.

Too Late screened at Fantastic Fest and opens on March 18th.