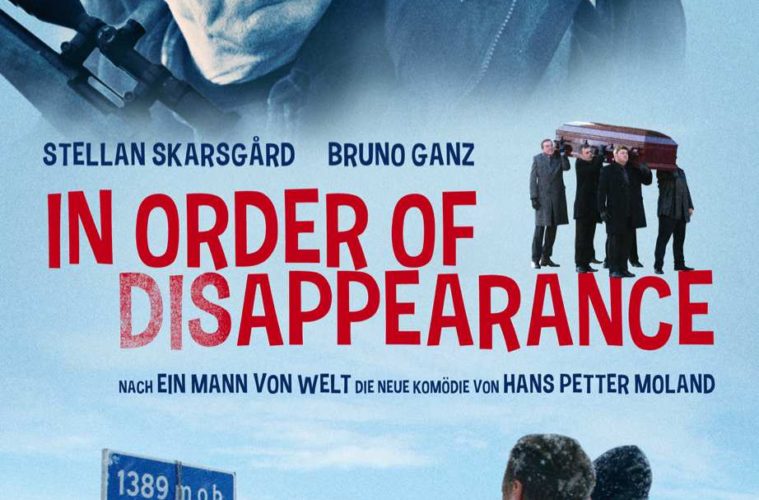 A film that is aware of its dark comedic touches, In Order of Disappearance is a Norwegian crime drama about a father named Nils Dickman (Stellan Skarsgård) seeking revenge for his murdered son who unwittingly got mixed up with a drug dealer. Time is spent giving the criminals, the protagonists, and everyone in between shades of grey and character backstory that ends up rounding things out. This is a smart decision by director Hans Petter Moland as it makes even the people you are supposed to dislike someone you feel you should have a rooting interest in. Set against a gorgeous Norwegian backdrop, this is a film with clear, concise execution, employing the kind of simplicity boosts the enjoyment factor.

Nils runs a company of snow clearers in Norway and is starting to get recognized in his small local town. When his son turns up dead, he tracks down the only clue he has to go off of. In this small town, he’s a contributing member of society and someone that has garnered esteem. He provides a vital function for the community to survive, clearing roads with his snow plow and snow blower. He soon stumbles upon criminal activity that is a bit different than you might expect. Instead of gangsters in track suits and just general bad actions, the main guy we are introduced to, The Count, is well-manicured and has a code of honor. Part of the amusement is simply to see so many people run around in suits doing nefarious things, a change from the usual U.S. criminal films, and there is definitely comedy in what is pulled off. Each time someone in the film dies, they are given a title card in a mock memoriam fashion. By the end of the film they’ve racked up so many and gone through so many different kinds of people that are killed — both people you are rooting for and against — that it takes on an odd feeling, but is still clever enough to make it stand out as a new wrinkle.

Another key aspect is how Nils is such an everyman that goes through extraordinary circumstances. They play on his age at times; while he is beating up a thug to get information out of him he has a tough time not showing his years, breathing heavy and looking fatigued. He also has a quiet and calm demeanor. When he fights with his wife it’s with the kind of reservation that makes one realize the depth of their past and how they’ve gone down similar routes.

The other aspect that elevates the drama is how we end up liking The Count (Pal Sverre Hagen). The guy is charming, bringing his henchmen coffee when he arrives to their hideout where they are beating a competing thug. But by the middle of the film you can see things are wearing him down. He’s going through a divorce with a woman (Birgitte Hjort Sorensen) he has no respect for anymore, some of his men are disappearing left and right, and a huge shipment of cocaine has gone missing. Making matters worse is that his only son is getting bullied at school and he’s going through child custody disputes. All the while he thinks it’s someone it isn’t, never suspecting Nils, who is a nobody in the suburban town outside of his home. He screams, he yells, and he generally looks flustered with all of these random things that keep happening. A running theme through is how people think of different nationalities in a particular light. The Count constantly bemoans the Albanians that he split up drug territory with, while one of his trusted henchmen continues to correct him that they are actually Serbs.

The film simply wouldn’t work if it didn’t have layers that improved upon the simple story of a father seeking revenge. Thankfully, In Order of Disappearance is filled with so many twists on what you expect that it feels refreshing. Beautifully shot (the snowplow and blower scenes in particular), clever and darkly humorous, this is a well-told crime film (thanks to Kim Fupz Aakeson‘s script) that brings serious chops when it comes to comedy and particular set pieces.

In Order of Disappearance screened at Fantastic Fest and opens on August 26, 2016.