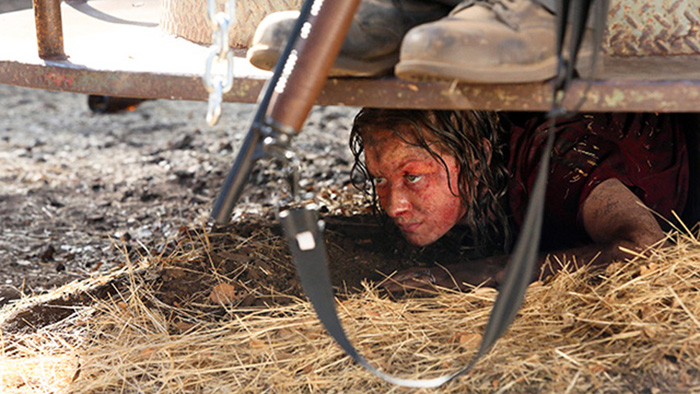 When Christopher Denham‘s Preservation shows recently discharged vet Sean Neary (Pablo Schreiber) telling sister-in-law Wit (Wrenn Schmidt) about how playing war as a kid allowed him to be killed and still find his way home when the game ended, I couldn’t help think of underrated Canadian film I Declare War. In it, a group of children battling in the woods is shown killing each other via imaginations projected onscreen. We watch as guns and bows replace the sticks of reality inside the players’ minds—a fun visual flourish ensuring we understand how violent and volatile today’s youth has become regardless of literal firepower. Fake or not, they’ve been raised on war, glory, and an insatiable bloodlust allowing them to act with sound minds and pumping hormones. So what would happen if they got their hands on live ammunition? The two films would make a worthwhile double feature commenting on how far society has come in the last few decades thanks to technological advancements, wars of revenge against terrorists, and our increasing desensitization to the sanctity of life. No longer do we fight the bulk of our battles face-to-face so the famous order at Bunker Hill (“Don’t fire until you see the whites of their eyes”) has meaning. So much is done on screen instead wherein lives taken become pixels—statistics—that cannot haunt our nightmares with definition. A lack of morality, maybe an abundance of psychopathy, and a me-first attitude has shaken our ability to hold compassion for our fellow man. We now fear the unknown, lock our doors, and inevitably forget to properly socialize our children in a post-9/11 world that’s never fully recovered.

Our idea of safety now comes in creature comforts and the thought that being connected will provide a net to fall into, dust ourselves off, and try again. Both Neary brothers grew up on the cusp of this transference from self-sufficiency and hope to absolute reliance—before cell phones and the internet turned us into soft or hardened extremes. Sean went the route of the latter, cutting himself off the grid to rely on his wits and talent at home like he did in the Middle East. Mike (Aaron Staton) finds himself a victim of the former, building his life on non-physical entities while gradually pushing his wife and family away. Sean lives off the land, Mike utilizes the assistance invention has wrought, and in the end neither is prepared for the absolute abyss of pure evil. The villain is as much them as it is the young antagonists lurking in the distance once the trio makes their way into a closed-down campsite. Yes, Denham embraces that often used horror trope of a deserted, dilapidated place no one in his/her right mind would enter let alone spend the night to set his characters up for the challenge of their lives. Before outside forces are even thought to exist, though, the Nearys have already put themselves on edge by placing blame. They tell themselves they’re being altruistic when each is actually selfishly going through the motions to make things easier and avoid conflict. Secrets are held, truths are ignored, and jealousies meant to cleanse themselves from blame are tossed around without a shred of proof. How quickly we turn on those we should hold close.

Right when we get a handle on Sean, Mike, and Wit—confident we can guess their every move—the rules change. They awaken without their tent, possessions, and hunting gear with x’s drawn on their foreheads and nowhere to go. While this would have catalyzed fear years before, it only ratchets up the paranoia. Sean believes there are others in the woods and yet Mike, too wrapped up in his false sense of security, sees nothing but the misguided prank of a brother caught in the throes of PTSD. Wit becomes trapped between them, unsure who to believe and preoccupied with her own personal issues to truly look at both objectively. Their pursers have the upper hand as a result and the toying begins with brutal assaults and a lot of heavy-handed metaphors. For the first three-quarters of the film Denham has crafted a slow burn, quietly menacing slasher with a few curveballs and updates to the mold. At the end, however, he introduces a quasi-comical streak in order to give us the social commentary on today’s unfeeling youth and mankind’s penchant to kill for fun. It’s as though we’re watching two different movies because of it, one about how we as adults need to wake up from the monotony of our self-imposed ruts and another about how disenfranchised we’ve become as a species. Rather than merge them naturally, Preservation finds itself fracturing into two halves. Both are moderately effective yet their contrast hinders us from staying invested without being jolted by their artifice. Denham’s worthwhile ideas do somewhat offset the manipulation of their introductions, so it’s not a complete loss.

The design and production is rendered successfully also. The villains are painted with an effective sense of dread and mystery, steeped in our technological age and completely detached from a human sense of decency. Our protagonists are up to the task too with Schreiber and Staton playing stereotypically opposite siblings and Schmidt a resourceful hybrid of the two balancing light optimism and the darkness of her situation. A lot of physical abuse ends up being ineffective despite the knockout caliber of each blow and fate does shine upon the righteous every now and again, but it’s all par for the course where the genre is concerned. I liked Schmidt’s performance, appreciated Denham’s desire to keep his evil “real,” and ultimately enjoyed the final shot regardless of it being glaringly on the nose.