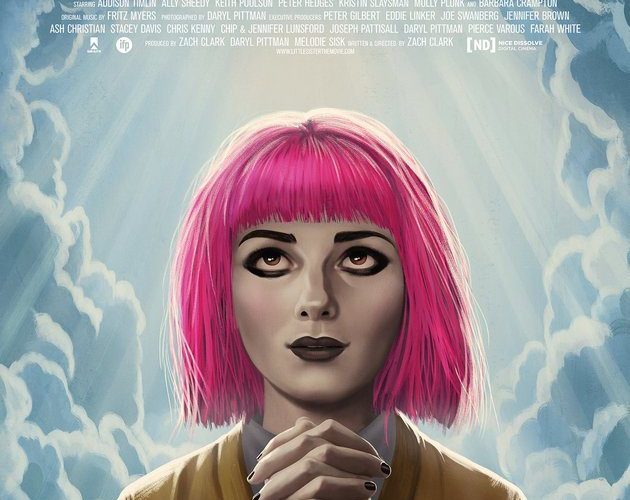 Saying Zach Clark‘s Little Sister being called a comedy does a disservice to the film seems like a slight on the genre. I know. But I don’t mean it that way. What this label does — even if it’s clarified with the word “dark” — is build an expectation that’s able to hurt the film’s true appeal. Clark and Melodie Sisk‘s script is definitely a drama first: a tough familial drama consisting of broken souls seeking an avenue to mend fences and remember what it was like to be whole. The humor enhances this drive by lightening the weightiness of the Lunsfords’ struggle as well as endearing them as a relatable group not so different from our own families regardless of our personal issues possibly not matching their immense tragedy.

The title dually represents young Colleen (Addison Timlin). She’s the “little sister” of the family, the youngest of two children who has always been looked upon as such with a straight-edge lifestyle contrasting her parents pro-narcotics philosophy and a goth chic image relegating her to be lazily dismissed as “going through a phase.” That was the past, though. Today we meet her in the present as a different kind of sister. She’s been away from home for three years, completely removed from all contact with the family as she’s progressed through the process of becoming a nun at a New York City convent. Colleen is devout and ready to take her final step, but her Reverend Mother (Barbara Crampton) isn’t so certain. There’s one more test to endure.

Enter the latest email from Mom (Ally Sheedy‘s Joani) with the subject line “Your brother is home.” This is a huge deal because Jacob (Keith Poulson) has been going through a long recovery after being caught in an IED blast in Iraq. His issues coupled with their mother’s attempt at suicide as a culmination of a long battle with depression are why Colleen had to leave in the first place. It wasn’t like Joani says in quick retort, that her daughter couldn’t face her own problems and had to desert them out of fear. We know she left because it was the only way to actually confront her problems. She had to escape her past: the pettiness, mistakes, and sometimes-unforgivable cruelty that had always been sent her way.

Now that she’s built a fresh start, however, the idea of giving herself to God without at least confronting her family again with clear head and newfound strength doesn’t feel right. So she borrows the Reverend Mother’s car and drives to North Carolina for a five-day stay. It starts with smiles — her father (Peter Hedges‘ Bill) a bundle of optimism caught in a sea of sorrow — before falling back into familiar patterns of ego and instability. Joani retreats hardest and in turn Colleen adjusts expectations too. But a reunion with mom wasn’t the trip’s meaning. Her purpose was wholesale catharsis. To coax Jacob from hiding, provide his fiancé Tricia (Kristin Slaysman) a shoulder to cry on, and remind dad that happiness can exist between them all again.

There’s a bit of Garden State in how everything unfolds — a different quirk with hardcore metal music and hair dye, but the look forward by glimpsing the past is most definitely included. Colleen embraces who she was not as a phase but as a part of who she will always be. She uses it to make Jacob laugh again. She runs into her old friend Emily (Molly Plunk), reminiscing about the old days while also comparing their similar trajectories in opposite directions. We see how Tricia has been coping with the emotional duress of loving Jacob in his current state of mind. We see how Joani and Bill have been surviving the extreme hardships that have befallen their family. None even begins to approach perfection and that’s okay.

Colleen isn’t some miracle for their problems. Her return signifies that hope remains alive instead. She isn’t yet a nun, but has the air of compassion and heart to let those around her open up. She’s already discovered who she is and who she will be, now’s the time to make certain the rest know too. It’s time for them to accept who she’s become and understand it’s through neither their faults nor successes. Colleen left to shutout their voices, removing their troubles and meddling from turning her into something she could not stand. And it was in her absence that they began to see where their lives were headed for better or worse. The fact she survived and healed gives them the belief they may too.

The comedy becomes empathetic, a tool for Colleen to use in order to approach those around her with equal footing. She’s no longer that small girl to be dismissed and refuses to be treated as such. This allows for some powerful scenes of laughter (she and Jacob) and tears (she and Joani). Rather than attempt to prove their righteousness, common ground arrives in the form of imperfection. It’s time to accept each person’s failings and stop letting them tear everyone apart. The threat of more tragedy and a misguided use of deceit able to risk ruining all the good this visit has conjured test the group, pushing them to the brink. Whereas that difficult place destroyed them in the past, however, they might be ready to overcome now.

Clark’s journey isn’t without its problems or weakness in unfinished diversions (Emily’s troubles are used a deflection and then forgotten), but the dramatic weight of the nuclear family issues overshadow these missteps. Sheedy and Poulson are standouts as the two with the most prevalent demons, but don’t discount Hedges’ desperation to keep things together or Slaysman’s nuanced confusion in feeling trapped despite being exactly where she wants to be. Timlin’s Colleen is the lightning rod connecting them, simultaneously a beacon of possibility and foreboding. She could easily leave again — this time for good — and that prospect scares them into pushing her away. Stronger and confident, Colleen is done with letting them dictate. It’s a new era (the clunky 2008 Obama election backdrop proving such) where she’s in control.

Little Sister screened at the Fantasia International Film Festival and opens on October 14.