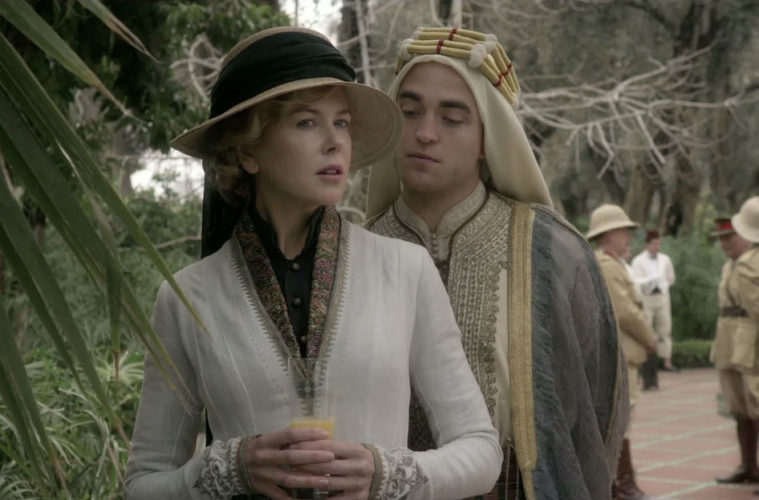 Werner Herzog‘s first narrative feature in quite some time will finally be arriving this fall, following a premiere at Berlin this year. Queen of the Desert tracks the story of legendary cartographer Gertrude Bell, a diplomatic explorer, who negotiated with Arab nations and helped establish the countries of Iraq and Jordan. Led by Nicole Kidman, Robert Pattinson, James Franco, and Damian Lewis, a new extended, three-minute U.S. trailer has now arrived.

We said in our review from Berlin, From his very first feature, 1968’s Signs of Life, Werner Herzog has demonstrated a predilection for stories revolving around exceptionally zealous and uncompromising – if not outright maniacal – individuals. These individuals, thus far, have always been men. It’s therefore somewhat disappointing that the protagonist of Queen of the Desert, the first woman to be granted center stage in one of Herzog’s narrative features, is possibly the most conventionally drawn character in his oeuvre – a criticism that can be extended to the film as a whole.” Check out the trailer and poster below, along with a batch of new images.

A true story of the life of British explorer and adventurer, Gertrude Bell, QUEEN OF THE DESERT chronicles her journeys of love and loss in the Middle East during the early 20th century.

Academy Award winner Nicole Kidman (THE PAPERBOY, RABBIT HOLE, AUSTRALIA, THE HOURS) stars alongside Academy Award nominated James Franco (SPRING BREAKERS, RISE OF THE PLANET OF THE APES, 127 HOURS), Golden Globe & Emmy Award winner Damian Lewis (“Homeland”, KEANE, “Band of Brothers”), and Robert Pattinson (THE ROVER, MAPS TO THE STARS, WATER FOR ELEPHANTS) . A curious and adventurous young woman eager to explore the world outside of England, Gertrude Bell (Kidman) goes to the British embassy in Tehran where she quickly falls in love with a secretary of the embassy, Henry Cadogan (Franco). This sparks the beginning of a life-long adventure among the beautiful but misunderstood peoples and cultures of the Middle East. Along the way, her path intersects with archaeologist T.E. Lawrence (Pattinson) also known as Lawrence of Arabia, and Major Charles Doughty-Wylie (Lewis), the British Consul General in the Ottoman Empire.

QUEEN OF THE DESERT is written and directed by Werner Herzog. The film is produced by Michael Benaroya (LAWLESS, THE WORDS, MARGIN CALL), Cassian Elwes (ALL IS LOST, DALLAS BUYERS CLUB, BLUE VALENTINE), and Nick Raslan (HAPPY PEOPLE: A YEAR IN THE TAIGA, RESCUE DAWN). The creative team includes long-time collaborator of Herzog director of photography Peter Zeitlinger (BAD LIEUTENANT: PORT OF CALL NEW ORLEANS, ENCOUNTERS AT THE END OF THE WORLD, CAVE OF FORGOTTEN DREAMS) and composer Klaus Badelt (HALO: NIGHTFALL, PIRATES OF THE CARIBBEAN: THE CURSE OF THE BLACK PEARL, CONSTANTINE, GLADIATOR).

The story of QUEEN OF THE DESERT is based on the true-life story of Gertrude Bell, who was a British political officer and archaeologist but ultimately a trailblazer on her terms. The story details the extraordinary adventures of Bell wrestling with the conflicts of love and tragedy, enemy and friend, and foreign and familiar as she sought to understand and unify people from different cultures. Atlas Distribution Co. will release Queen of the Desert in late September.