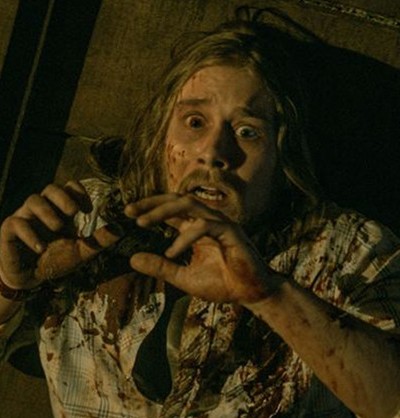 On the same day that Sam Raimi‘s family friendly Oz the Great and Powerful hits theaters worldwide, it’s only fitting that an ultra-violent remake of the movie that put him on the map has its world premiere. We’ve all been deeply disturbed at the trailers for Fede Alvarez‘s debut, but is it truly “the most terrifying film you will ever experience”? We’ve got the first reactions from the film today, which premiered late last night at Austin’s South by Southwest Film Festival, but before we get to that, we’ve got word straight from the director that a sequel is already underway.

Revealed during a post-screening Q&A, according to multiple sources, Alvarez said a script is currently being written for a follow-up. Unfortunately there’s no more details beyond that, but it could mean an Evil Dead 2 and an Evil Dead 4 are being written simultaneously, if all goes according to plan. We’ll have to see how this remake does first though, and one can check out the reactions from SXSW below for the film starring Jane Levy, Shiloh Fernandez, Lou Taylor Pucci, Jessica Lucas and Elizabeth Blackmore.

Update: Read our full review of Evil Dead from the SXSW premiere.

How it passes for an R-rating is mind boggling, yet here we are with a movie that sets innocent people on fire, stabs people in the eyes, cuts open beautiful cheeks, smashes in skulls, and grinds off multiple limbs– all with a demented smile on its face. If the thought of that makes you uneasy, you are not going to be able to handle Evil Dead. That’s not hyperbole, either. Again, Evil Dead is not “the most terrifying film you will ever experience.” But if your threshold for gore is low — hell, even if it’s fairly modest — Alvarez’s film is going to smash its juicy head in with a toilet lid and you may not be able to handle it. We’re kind of amazed the MPAA’s censor-happy members let it get by. The most disturbing thing about Evil Dead isn’t a moment in Evil Dead. The movie could serve as a twisted mirror for our desire to see a level of violence rarely shown on the big screen except Alvarez isn’t judging his audience. He’s indulging them. That’s not to say he should be preachy or restrained. By the metric he has laid out for his picture’s goals, Alvarez’ film is a wild success. It’s a crowdpleaser that will leave gore-hounds stuffed, but we should all be somewhat shaken by the gruesome feast Evil Dead asks us to devour.

With titles like 2010’s The Nightmare on Elm Street, 2003’s Texas Chainsaw Massacre and 2009’s Friday The 13th is totally understandable that horror fans would be nervous about an Evil Dead remake, but you can put those fears to rest. With unrelenting gore, an awesome cast, and authentic respect for the original, Alvarez’s film is a straight up bloody good time at the movies.

Evil Dead is slickly put together, but it is also vapid and vacuous. It wants to be an entertaining film because that’s its job, but it’s only willing to try so hard at it. For horror fans, that’s probably enough. There is gore aplenty and over the top violence. But you’ve seen all that before, and recently. How much is a variation on the theme really worth to you?

Alvarez wrote the script with Rodo Sayagues, and I’ll say this for the film: they didn’t do anything by half-measures. This is an uber-gory update, and taken only on that level, it’s sort of thrilling to witness. Alvarez has a strong visual plan for the film, and I’m guessing young audiences who aren’t that familiar with the original films are going to be rocked by the experience. But if you’re looking for a film that works both thematically and viscerally, “Evil Dead” comes up a little short, and in ways that left me frustrated just as much as I was entertained.

‘Evil Dead’ becomes less of a movie and more of an assault on the senses, building to a sustained crescendo of brutal sequences in which the characters, possessed by the spirits of the book, perform hideous acts to themselves and each other. It is certainly not for the faint of heart; two women in the row behind me left about halfway through the movie, after one told the other that she “couldn’t handle it.”

The Horror Chick at Dread Central:

Breathe a sigh of relief, fiends- Evil Dead delivers the goods and then some, even managing to step out and create its own universe that still wholly adheres to the one Sam Raimi concocted over three decades now. The amount of intensity, violence and downright nastiness that Alvarez manages to cram into Evil Dead is brutal, visceral and will prove to be an endurance test (in a good way) for anyone out there who goes into it thinking this is going to be another “by-the-numbers” studio remake.

Fede Alvarez’s Evil Dead is most certainly a remake done right. It takes elements from one of horror’s favorite franchises and reinterprets them in the most extreme manner possible for a studio film. It’s very much an attempt to recreate the intended effect of the original for 2013 audiences and, in that regard, it’s almost entirely successful. Built from the ground up like some perverse mainstream blockbuster, it might very well be the first “event film” aimed squarely at the heart of those who’ve been craving blood for all these years.

Evil Dead jumps and bumps, but rarely do the scares feel cheap. Eerie static images share screen time with pop-up frights, and even the grossest of gross-outs have a certain charm, which is again testament to the practical effects. Where we should be writing off these moments as exploitation, the magnitude of the violence becomes positively absurd and keeps the atmosphere light enough for the audience to enjoy the ride. The opening moments, just prior to the appearance of the title card, wonderfully encapsulate the crowd-pleasing spectacle that is Evil Dead.

You can say a lot about the Evil Dead reboot, but you can’t deny that Fede Alvarez and his team swung for the fences. This is hands down the goriest big studio film since District 9 and Neill Blomkamp’s brilliant sci-fi tale looks like Bambi in comparison to the kind of fucked up (and mostly practical) shit we see in this film.

“Blood-drenched” barely begins to describe Fede Alvarez’s remake of Evil Dead, a gore-for-broke affair that strips the flesh off Sam Raimi’s cult-beloved comic-horror franchise and exposes the demons at its core. The presence of Raimi, original collaborator Rob Tapert, and star Bruce Campbell as producers should give the faithful permission to attend what would otherwise smell like a shameless exploitation of the 1981 film, but the high production values and nonstop action offered here should also please younger genre fans who’ve never bothered to rent it.

The first two entries in Sam Raimi’s “Evil Dead” trilogy — released in 1981 and 1987, respectively — delivered such delightfully inventive takes on the horror genre, uniting the disparate traditions of suspense and slapstick, that no remake could possibly match their originality. Respectably enough, with his snazzy redressing of the first movie, director Fede Alvarez doesn’t even try. Instead, “Evil Dead,” a studio-produced take on the demon possession mayhem at a now-iconic cabin in the woods, delivers a slick and undeniably wild ride by repurposing the original premise in body horror terms. With simpler aims and oodles of blood, the new movie is a watered down scare-fest that works in spite of its formula by constantly frightening audiences into submission.

Joshua Brunsting at The Criterion Cast:

Evil Dead may lack a real heart or anything resembling an emotional core, but it makes up for it in sheer audacity. Bleak as hell, and even more so relentlessly gorey, this film will be just what the doctor ordered for a generation of horror fans who have become fed up with CGI blood and those looking for something that is simply genuinely frightening. Aggressive, brutally unflinching, and with a mix of fan service and a fresh tone, Evil Dead is simply the horror film that we have all be waiting for. Thematically the film is entirely vapid, but for those looking to have their senses assaulted in ways horror cinema hasn’t seen in years, then this is the first must-see picture of 2013.

The downright gnarliest mainstream horror release in recent memory, “Evil Dead” is certainly a considerable and occasionally commendable dose of the ol’ ultra-violence, but Fede Alvarez’ Raimi-sanctioned update of 1981’s cult favorite only really has that demented determination going for it.

And before we go, a few updates on some other horror films landing soon. Magnet Releasing have revealed their horror anthology sequel V/H/S/2 will hit VOD on June 6th before landing in theaters on July 12th. Featuring directors Simon Barrett, Adam Wingard, Edúardo Sanchez, Gregg Hale, Timo Tjahjanto, Gareth Evans and Jason Eisener, see our Sundance review here. In between, IFC will release the Maniac remake starring Elijah Wood on VOD and in theaters on June 21st. Are you looking forward to the Evil Dead remake? What about a sequel?