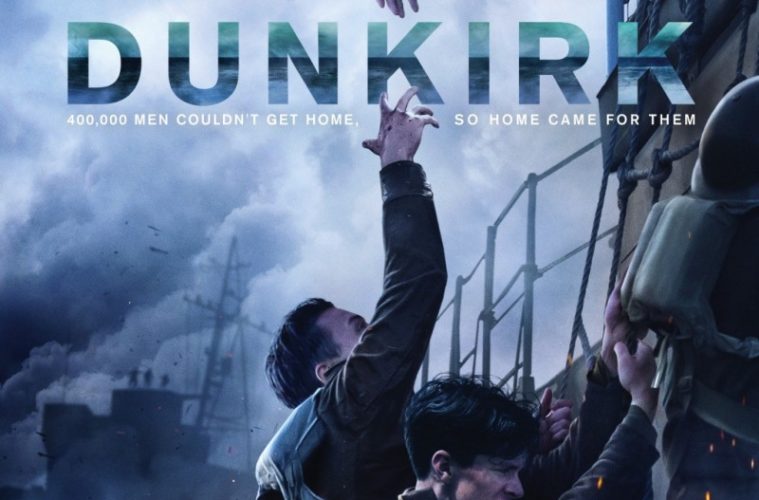 Although being less-than-inclined to endure whatever tests will give me a solid answer that ensures my hearing isn’t damaged in any notable way, the thought continually crossed my mind during a 70mm IMAX presentation of Christopher Nolan’s Dunkirk. Sample dialogue from my screening includes: “Hrmmmfrrrrshrrr”; “ay, laddie, why don’t ya errbrrrfiiii”; and “we’re appraaaaa ghhhhh.” I simply, sincerely could not tell you what Nolan, writer, thought wise to have his characters tell each other, but I certainly saw what Nolan, director, had in mind, and that’s good enough — if only that far. As marketing and related hullabaloo would suggest, it’s the visual specification that matters most; and per WB’s diligence and my good fortune of living in a properly equipped city, the thing has been viewed as intended. As shot on 65mm by Hoyte van Hoytema, here reuniting with his partner on Interstellar, its images are most obviously big in size, more importantly fluid in movement in a way not equaled (let alone attempted) by just about anything you might find anywhere, at their peaks eliciting a you-are-almost-there intensity whose effect evinces Nolan and co.’s skill for arousing power at individual turns. Yet I gradually came to suspect the individuality of Dunkirk‘s power indicative of a certain struggle with conjuring up more. It’s something strange: a film that evokes achievement without necessarily being such.

You know those segments of Nolan’s films where all hell starts to break loose? The camera woozily working towards actors’ faces, the actors glaring with portent, the Zimmer really churning? Dunkirk is probably the closest we’ll ever come to a feature-length rendition of just that — almost certainly a hell-of-sorts for the those circles agitated with Nolan, and a dull thrum for one who’s found both his craft and narrative proclivities to be of either great value or, at worst, strong curiosity. It’s not for lack of his ambition towards something entirely different within the well-worn mold of a World War II picture, but ambition only takes us to a certain point. Played as an intercutting-heavy symphony, it hops, relentlessly, between three sides of the Dunkirk evacuation — one week, on land, before; one day, by sea, preceding it; and one hour, in air, as the efforts come to a head — as forces start to (or, more interestingly, don’t) converge by way of pure duration, horrifying battle, and, most believably of all, man’s courage and ingenuity. Watching it unfold so breathlessly, I was struck by the many moving parts, this one-thing-after-the-other temperament, then immediately left stiff by their so-pronounced presence and left to think it would play almost exactly the same without title cards delineating temporal tiers. If small excisions would lead Dunkirk to run as a straight war film lacking for certain strides towards grandeur, would the adjustments be so bad?

I struggle imagining the structure-obsessive Nolan committing to such a wild idea without weighing its numerous ins and outs, risks, and rewards. Perhaps the issue is that he did precisely this: to paraphrase an earlier, better film, it’s a trick whose seams can be felt if inspected even cursorily. These are, about half the time, to be commended, for instance in how little effort’s made to counter breakneck pacing by developing any character, the writer-director instead putting great faith into his officers-and-grunts mix of seasoned pros and fresh-faced newcomers to carry their roles. I couldn’t decipher (or, well, hear) over the innumerable gunshots and explosions sent his way that Fionn Whitehead’s leading player is named Tommy, so the loving attention paid to his scared face told its own story in the same way Cillian Murphy’s “Shivering Soldier” (no, really) brooding about will communicate trauma with nary a word. (Note, though, that reports of Dunkirk having “almost no dialogue” are, nevertheless and of course, overblown.) Mark Rylance’s Mr. Dawson (Wikipedia really is proving a great help here) is paternal because he’s well-cast alongside Tom Glynn-Carney as his son, Peter, and because it’s believable that a man of this place and time would dress and act the way he dresses and acts, not as a result how Nolan writes. This is not a flaw; it’s evidence of his piece-building in ways that are clean, concise, intelligent.

A constant movement unmoored from all but the present moment (however porously “present” is defined here) pushes Nolan forward as a visual stylist and suspense-crafter — lots of portent in the images of armies and crafts, plenty of faith in his actors to look concerned or outright distressed — as it stalls out Dunkirk in most other respects. Its plethora of graceful moments are, in fact, that — appreciated, even deeply felt, as they pass through the 70mm projector, then forced to the back by however many things will soon follow. An IMAX-sized dogfight between English and German planes (Tom Hardy leads the former; Michael Caine pipes in as an air commander) affectlessly zips by until the sight of a collapsing plane smacking towards the water leaves its desired imprint; a submarine attack on the ship holding our heroes is, in shot-by-shot effect and editing rhythm, the closest Nolan’s ever come to avant-garde expression, or at least is as expressive as anything he’s ever photographed; the whine of an aircraft superimposed perfectly over images of sitting-duck soldiers earns the almost certainly intended “ah, shit” effect that will recur; etc. Showing, not telling: a quality Nolan’s long been lambasted for not embracing more fully, and for which he’s found a place befitting his proclivities. Yes, there remain numerous medium shots of people pensively standing, looking, or lurking, but these are part and parcel of Dunkirk‘s scope: bodies and faces alternately dwarfed by and at the center of an event whose scale is so unfathomable that even a studio-supported epic deigns to contain itself within a limited perspective.

It’s a vaguely flattened procession of talent and craft, an almost-there thing arguably more curious for that failure to soar. Never aggravating in its faults, though they may be symptomatic of the endeavor entire; sometimes powerful, both in spite and because of how click-clack the means by which its incidents and images are assembled; largely distanced, especially when attempts at a certain kind of transcendence (e.g. shots of a foam-covered beach, scored by Zimmer’s ethereal tones) simply feel as though they emerged from a different work. The level of interest is at once passing and sincere, an experience of having repeatedly brushed up against a grand work before again being pulled back — muddled sound and fleeting fury signifying something or other.