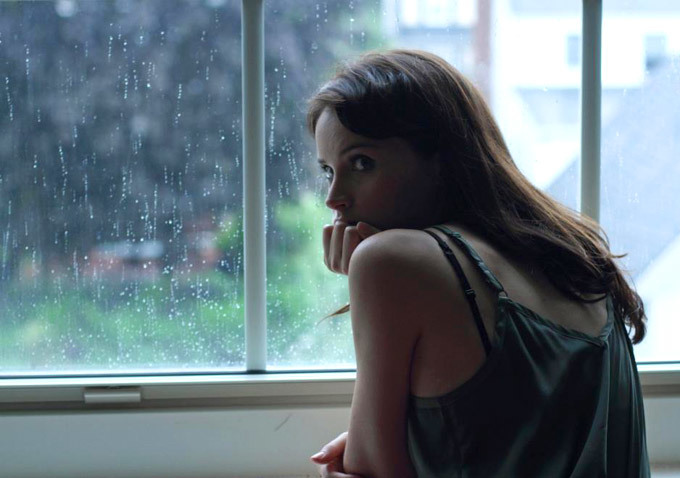 Drake Doremus On How ‘Like Crazy’ Inspired ‘Breathe In,’ Improvisation, and the Comedy of Guy Pearce After premiering at last year’s Sundance Film Festival, Drake Doremus‘ Like Crazy follow-up Breathe In slides into theaters this Friday, and for the occasion we were able to sit down with the director for a brief chat about his latest work. The drama follows Felicity Jones as a British exchange student named Sophie Williams (Jones) who begins a relationship with her host father Keith Reynolds, played by Guy Pearce. Speaking with Doremus by phone, he talked to us about how his last film inspired his latest,  improvisation, the unexpected comedy of Guy Pearce, and the traditional nature of his upcoming sci-fi drama, the Kristen Stewart and Nicholas Hoult-led Equals. Check out the conversation below.

Did the success of Like Crazy provide you with opportunities to do something bigger?

Definitely, but I made a conscious effort to not do something too much bigger, to still kind of stay within my comfort zone but still explore some of the characters and scenarios that I found interesting.

What’s your working relationship like with your co-writer Ben York Jones?

It’s an amazing process; we come up with an idea or thought and pass it off to him and he really fleshes it out and writes it and understands it with diligence and research and patience. Then it comes back to me for the process of shooting and we develop it together on set when we’re writing lines or coming up with different things, so it’s a real fun process of outlining the movie as specific as we can. Yeah, you got it. The whole things was written for her, and really thinking about Dustin O’Halloran and wanting to include his musical sensibilities in the heart of the film.

Are you interested in exploring the outsider context as a way of looking at America?

Absolutely, after meeting Felicity it was really fascinating to me trying to immerse her in American film culture and doing it in a way that felt really foreign but also really familiar so I think indirectly, by virtue of meeting Felicity, that just kind of happened.

Could you discuss your improv process, and is it at all inspired by Mike Leigh?

The truth is I’m not all that familiar with how he works. I mean, I’ve heard stories but I’m not really inspired by anything other than growing up in the improv and sketch comedy world and that being the base of me going to film school and learning a more structured way of making films, so this is more or less a hybrid way. For me it really starts in the rehearsal process where we take the outline and throw it out the window and do a bunch of exercises to sort of fully understand the characters and give them a life so that they’re living and breathing and functioning. Then we slightly rehearse the scenes so that we kind of have an idea of what they’re going to be, but not have them fully working at rehearsal and then when we get to set we continue to explore the scenes, and hopefully if it’s working there while we capture it, so we don’t have to get it totally right in the rehearsal process. Are there actors you’ve met who you’ve wanted to work with and then thought maybe they wouldn’t be comfortable with this system of improv?

I’ve been surprised by lots of actors, including Guy [Pearce], who’ve never improvised before in a film, and I think a lot of actors are excited by a collaborative process like this. I’ve found most actors are really good at it and they’re just sort of relying on their instinct which they already have.

Can you talk about casting Guy Pearce? I don’t know if you saw Lockout, which not a lot of people did, but I personally think his comedic chops are underused. Did that ever come apparent?

It was unbelievably apparent, he’s one of the funniest actors I’ve ever worked with, which was very surprising to me, but at the same time he had this ability to be extremely intense and immersive in what he’s doing so he kind of went back and forth in-between takes and it was kind of amazing to be around but what an incredibly good, easy-going person he is.

Do you have any other scripts in the pipeline?

Yeah, I’m going to start shooting a movie later this year called Equals that’s written by Nate Parker who did Moon, and that’s a more traditional script that we developed together over the last year and a half. We decided to work in a different way and take this way of working, but do it in a hybrid form.