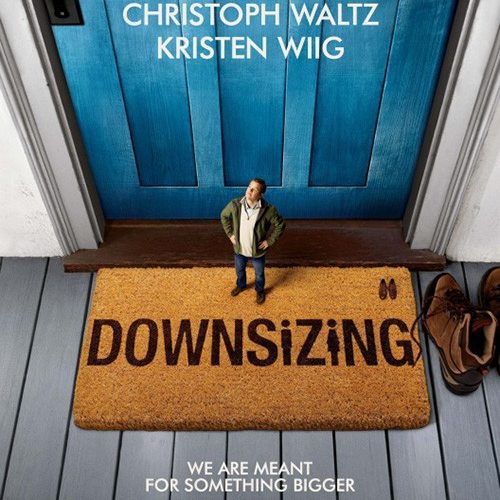 The formidable critic Anthony Lane once collectivized the archetypal Alexander Payne lead — that unmistakably downbeat beast — as the “beached male.” Matt Damon is certainly no such thing. Nor is his Paul Safranek, the character he plays in Payne’s new film, Downsizing, a remarkably uncharacteristic environmentally conscious sci-fi comedy that poses this question: in a world stretched to breaking point by overpopulation, food and water shortages, overflowing landfills, and so on: would our problems not be solved if we were all just a little smaller?

It’s a fine conceit from Payne and his long-time writing partner Jim Taylor, but one that poses far, far more questions than it hopes to answer. Viewers should perhaps not be too hard on themselves if their minds wander away from the theater (and perhaps Payne’s narrative) at times to consider all the possibilities of a place such as Leisureland, the miniature world where Damon’s Safranek finds himself about a half-hour into this film, all shaved eyebrows, recently divorced, and five inches tall.

The man Paul has to thank for all this is one Dr. Jorgen Asbjornsen (Rolf Lassgård), a Norwegian scientist who discovers a method of shrinking certain forms of organic matter. This process of so-called cellular reduction is quickly celebrated as an environmental savior, with the inaugural colony set up by the man himself in his native land where the first such baby has already been born. Ten years on and it’s a fully fledged global consumer product and, in a fine stroke, Payne has it marketed as a sort of do-gooder early-retirement package with whole cities set up for people willing to liquidate their assets, help the planet, and “go small” (to use the film’s faux woke parlance). Indeed, such are the benefits that even a lower-middle-class couple struggling with their parents’ medical bills — e.g. Paul and his wife Audrey (Kristen Wiig) — can own a mansion, never work again, and enjoy things like tax incentives and tennis lessons, with full health and well-being packages thrown in on top.

That all might sound like a utopian nightmare — perhaps with shades of Huxley, like something Neill Blomkamp would direct — but Payne has never been interested in that end of the social ladder. As it happens, Audrey chickens out at the last second, divorcing Paul and leaving him broke enough that he has to find a job. So we don’t really see the mansions of Leisureland, but its call centers and apartment blocks instead. Dusan (played, broadly, by Christoph Waltz), a Serbian opportunist who smuggles high-end goods between small communities and lives in the apartment upstairs, allows the film to show even more of Leisureland’s shadier side.

What we haven’t noticed until now is that Downsizing is in fact a love story, and it’s here in Dusan’s apartment, waking up from a bender, that boy meets girl as girl cleans house. Girl, in this case, is Ngoc Lan (played by Hong Chau), the only survivor of a group of refugees who were shrunk and smuggled out of a prison camp in a flat-screen TV box. The image of the box with five tiny holes cut out is unmistakably moving, and we’re left to wonder what other ramifications molecular reduction has had on world politics, but there simply isn’t the time.

What’s developed are the lives of the people in Lan’s community. Leisureland’s marginalized inhabitants live in apartment blocks in an enclosure outside the city walls where they watch telenovellas on an iPad the size of a house. The image of the bus leaving the city limits through a crack in the wall to the small, unprotected space outside is perhaps the most potent of Downsizing’s many visual metaphors, and “many” is the key word here. So dense is this film with ideas and wonderful sight gags (as an admirer of Buster Keaton, Payne has always had an eye for physical comedy) that the roving plotline can run away from one at times. Payne’s beached males require more screentime than a film like Downsizing can provide, and Damon, sinking into that small-town mold just a little, is too downbeat to hold one’s gaze at times. The heart of the film instead lies with Ngoc Lan, who offers a spunky — if perhaps somewhat ritually insensitive — counterpoint to Paul’s Omaha sensibilities. Paul begins helping Ngoc with her charitable work, finding happiness not in the grand idea of Leisureland, but its smallest cracks.

Perhaps the most archetypal Payne moment comes when Paul is faced with a somewhat hubristic existential dilemma late on, even if it is of far greater importance than Miles and his 1961 Château Cheval in Sideways, Woody Grant and his winning ticket in Nebraska, or anything Jack Nicholson dealt with in his Winnebago in About Schmidt. Downsizing is arguably the most flawed of Payne’s work, but despite its apocalyptic overtones, it’s also his most optimistic. The resulting emotional hit of Paul’s final actions — like that of Miles’, Woody’s, and Schmidt’s — is no less moving, either.

Downsizing premiered at Venice Film Festival and opens on December 22.