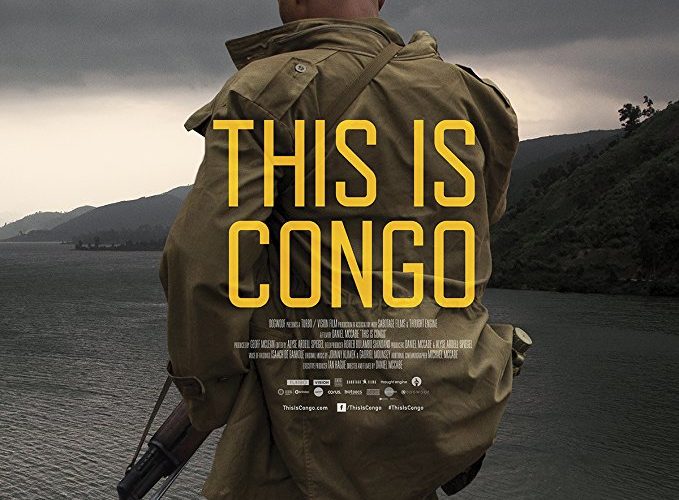 Documentarian Daniel McCabe wastes no time getting to the point of his film This is Congo with the words of DRC National Army Colonel Mamadou Ndala. This smiling dreamer of peace and unity speaks about his home like a philosopher as far as its riches (nature, minerals, and beauty) providing its people pure joy from God despite the contrasting prevalence of misery brought by the greed of men seeking to wrest it away for selfish gain rather than public need. He’s an optimist caught within an age-old fight he knows he probably won’t survive and yet he remains upbeat just the same. Mamadou is fearless because his motivations are forever pure. He’s a hero to the people, a symbol for the military, and a free man without freedom.

As this look at a war-torn nation trapped within a never-ending cycle of conflict presents freedom, only one man does possess it: President Joseph Kabila. Corruption has placed him in his position of power and he does everything he can to retain it. This means a constant deployment of troops in North and South Kivu at the border of Rwanda and Uganda, his sights set on destroying the rebellion known as M23 that has been a thorn in the Congo government’s side for two decades. The city of Goma becomes ground zero—a location M23 leader Sultani Makenga knows is key to gaining leverage if ever the two sides could meet diplomatically. No one is therefore safe as both sides fight “for the people” and their own prosperity. McCabe shows us these poor souls left to run, hide, and wait. He introduces a tailor named Hakiza Nyantaba whose current displacement camp residency is his sixth time retreating from a home caught in the crossfire. It becomes a decision between catching a bullet by staying or cholera by leaving, the latter assuring someone he knows won’t be returning once this war ends. But things aren’t much different for those able to remain in their houses either. As we learn from “Mama Romance,” survival comes with risks. If it’s not the dangers of escape, it’s those that come with combatting poverty. She’s become a precious stone dealer to support her children, a job that forces her to illegally move minerals across country lines. We do what we must.

That could actually be Congo’s motto considering no one person we meet is doing anything out of desire rather than necessity. This truth is epitomized most by a man wishing to stay anonymous by using the name “Colonel Kasongo.” He’s now in the National Army, but admits to having fought with the rebellion three separate times. To listen to him speak is to realize there is no good side no matter the integrity of a men such as Mamadou. “Kasongo” fights because it is his job. Sometimes the DRC has more to offer him and sometimes the opposition does. Suddenly it’s as though the whole ordeal is composed of mercenaries who’ve found a way to game the system. As long as the people suffer, for-profit wars are justified. This is Congo captures a moment of time and an entire history simultaneously. To understand the hypocrisy involved, McCabe takes us back into the past to understand how things got so bad. He uses “Mama Romance” to help expose us to just how wealthy this nation is despite its appearance and Kabila as just the latest despotic ruler of a period set-up by American interference (surprise, surprise). We watch as Mamadou earns his promotions and public praise just as his superiors look to minimize his victories by pretending they are theirs. We witness the suffering of Nyantaba as he and the others like him become collateral damage. And we listen as “Kasongo” lays everything out for us matter-of-factly and devoid of irony: a broken system seemingly without solution.

This reality is both heartbreaking as far as what happens to the characters McCabe has highlighted and horrifying as far as its comparisons (hyperbolically or not) to what we’re facing in America today with autocratic rule and bubbling rebellion. We learn about Rwanda and the manufactured adversarial dynamic between Tutsis and Hutus, making it difficult not to see such arbitrary lines being drawn between races, religions, and political parties here. When our very lives are set-up to be one or the other, any hope for the peace and unity Mamadou strives to achieve is lost before the first bullet is fired. That “Me versus Them” attitude becomes more about the victor lording its pettily constructed superiority over the defeated than a quest for truth, justice, or morality. Those who do fight for the latter become the minority, the weak. Those who refuse to compromise their ideals yet still follow chain of command will always be pushed aside as tools rather than appreciated as leaders. Soon enough the vicious and cruel become too strong. They weed out those who may prove competition and destroy them before they have a chance to expose what’s really happening. War becomes a way of life between two false hopes going through the motions in order to keep power and chip away some spoils when possible respectively. And all the while it’s the common citizens who are made to suffer. The men and women both sides are “protecting” become homeless, helpless, and hopeless. McCabe captures futility in all its devastating glory.

And it’s not without personal risk either as his seven years imbedded in the Congo put him on the frontlines with Mamadou and the M23. His camera shoots as a group of people fleeing homes duck and cover to the sight of cannon fire. He gets up close and personal as soldiers blindly shoot automatic weaponry at arbitrary locations someone thinks return fire is coming from. Wounds, dead bodies, and burning cars are never blurred or sanitized, so anyone faint of heart should prepare him/herself for the nightmare of war. McCabe’s goal for his film is to show the chaos objectively and thus not take sides or betray the reality of just how corrupt this fight proves. He places hubris, dignity, fear, and courage onscreen—raw and unfiltered.

This is Congo screened at DOC NYC.