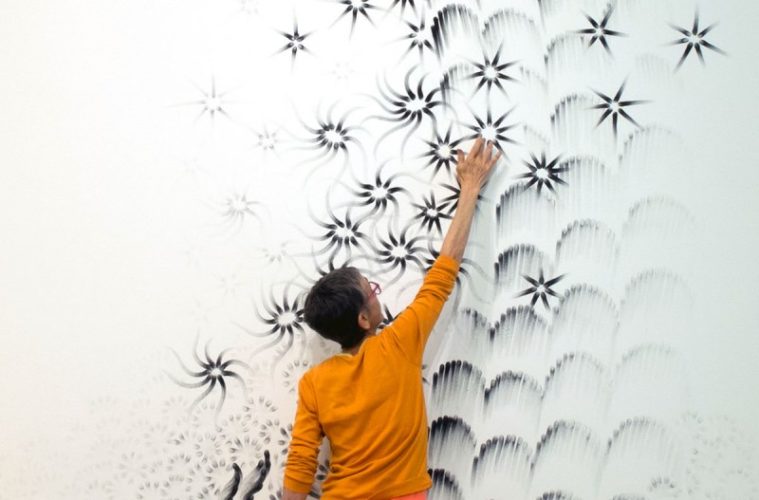 Set against the backdrop of the Grand Rapids’ ArtPrize, More Art Upstairs is a relaxed and immersive look at an event that consumes the city for three weeks every fall. The charm of Judy Hassett Sanchez’s picture is its documentation of the 2015 edition following, with a good deal more intervention than Fredrick Wiseman. She captures the institution, from artists (the ones selected are not camera-shy), judges, the public, and organizers of Art Prize as they keep taps on what’s trending. We have several tour guides including Kevin Buist, the organization’s exhibition director, who finds constant amusement in the difference between the two prizes: one awarded by curators and academics, the other awarded by the general public. They sometimes have similar themes, with the general public opting for work that requires greater craftsmanship. The artists too are also present and willing to explain the underpinnings of their work and process–that is, until a judge from New York comes along and probes them for their influences.

More Art Upstairs is fascinating if somewhat limited in its scope as we jump from conversation to conversation, following Buist and artists including Judith Braun who crafts large-scale paintings using her thumb print. Interacting with the city, we spend time on Rumsey Street, a blighted neighborhood which is transformed through a series of city interventions through SiTE:LAB by local curator Paul Amenta. It hosts Kate Gilmore’s haunting juried prize winner Higher Ground where girls swing ominously inside a pink house for tourists to gaze. SiTE:LAB’s urban development do have an interesting effect on the community as evidenced in a conversation over heard in a local salon.

The collection that Sanchez chooses to focus upon (perhaps due to luck) all seem to qualify for the public prize. They include a couple from Rhode Island, Leah Smith and Michael Townsend, who craft a large mural in painter’s tape to Nick Kline’s Stripes for St. Joseph, which inverts and challenges the notion of a “black” and “white” church. Other artists don’t provide or perhaps seek out such access and aren’t the focus on Sanchez’s lens for one reason or another.

While it can be uneven, More Art Upstairs is a relaxed documentation of the 2015 ArtPrize that occasionally takes on the characteristics of a sports movie with the enthusiastic Braun growing competitive, and $250,000 on the line, plus the golden ticket recognition that comes from having won the largest and most visible prize in contemporary art. The city-wide event is so immersive that artist talks from the event are broadcast in prime time on the local NBC affiliate. More Art Upstairs is an entertaining look at ArtPrize and the tensions between the two prizes, and of course the age-old divide between what excites curators and scholars with Masters degrees and PhDs and what appeals to Joe the Plumber.

More Art Upstairs had its NYC premiere at DOC NYC.