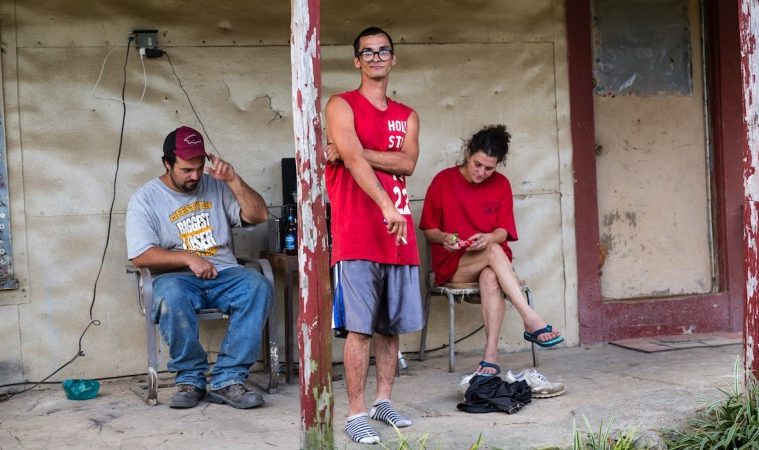 DOC NYC Review: ‘Meth Storm’ is a Heartbreaking Film with No Easy Answers

For some who grow up in rural Arkansas there’s limited options: you can either be a meth dealer or a cop chasing meth dealers. Set in a close-knit community of Faulkner County, near Conway, native sons of the region Craig and Brent Renaud have crafted a harrowing look at a community that has no easy answers with Meth Storm. Following two families impacted by the drug trade, on one side is Johnny, a sympathetic DEA agent who has locked up his fair share of classmates, children of classmates, and friends for their involvement in the meth trade. What was once a network of mom-and-pop operations cooking meth locally had been put to an end thanks to laws that require you to show an ID when purchasing Sudafed. The addicts in the region now present an opportunity for the Mexican cartels to peddle high-grade crystallized meth, called Ice, into these poor communities, turning addicts into dealers.

On the other side is Veronica, the matriarch of a long-time family of users. At 45, she looks easily twenty years older. In and out of the system herself, moving from home to home, she’s supported by two straight-edge daughters, while her sons become her drug buddies, searching for the next vein to tap. These passages are excruciating as is the emotional toll of son Teddy’s multiple incarcerations. As the film begins he’s 26, sentenced to years in prison away from his daughters. He eventually cleans up, writing letters praising the drug-free lifestyle to his mother who knows better. There is very little hope here.

As Johnny–also a small town mayor–explains, thriving downtown economies used to exist until the introduction of Wal Mart’s always low prices undercut the small guy. I’m sure there’s a little more to it than that, but the film offers up no easy solutions for making rural Arkansas great again. Johnny, however, laments decriminalization and federal budget cuts, telling the filmmakers directly as his agents are buying meth at an interstate motel. The DEA can only afford to buy as much as they used to.

Directed with intimate access to both families as a larger proxy for the issue, Meth Storm quickly evolves from an opening that feels like an episode of Cops into a hard-hitting issues documentary with an unprecedented view into this specific kind of hell. The Renauds don’t shy away from the dangers of both sides, offering a frank look at the early day lives of Veronica and family as they struggle to survive, making the most of their chards of ice and attending church to find some salvation. The faith community has made in-roads operating a recovery camp, but there’s only so much that can be done here.

Exploring a community that has yet to see the heroin and fentanyl wave hit, the Renauds have made an essential documentary. While Johnny has seen some success for those he’s arrested that this can be a turning point for them, there’s little support and even less opportunity in these communities. Meth Storm may very well be the most heartbreaking exploration of Americana you’ll see all year.

Meth Storm screened at DOC NYC and will premiere on HBO on November 27.