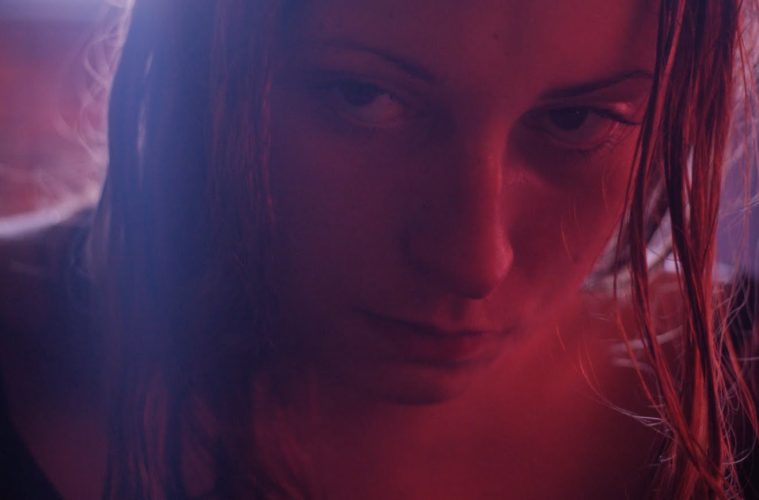 There’s a heightened sense of drama and stylization to Benny and Josh Safdie‘s latest feature film, Heaven Knows What, which is in limited release with an expansion over the coming weeks. Revolving around the true stories of Arielle Holmes, who plays herself in the film, it is a look into the life of junkies on the street of New York City. With an odd, off-beat musical score that is part 80s’ and more whimsical than one might expect, the film is full of surprises that can be hard to witness. When you live your life from fix to fix, everything takes on a sense of emotional weight that is captured by the Safdie brothers.

So it was with great pleasure that I got to sit down with Josh Safdie and producer Sebastian Bear-McClard at SXSW earlier this year. Together we talked about how Arielle Holmes came to reveal her story, the reason they shot it on the streets without extras, the way they condensed the timeline and story, how time is measured in the life of a junkie and why they decided against title cards to express time lapses, how Caleb Landry Jones delved into his role, and much more. It’s a winding, interesting interview that is sure to be informative for potential viewers and those looking for more after seeing the film. Enjoy the full conversation below and check out the Safdies’ favorite Criterion films here.

This is based on Arielle Holmes’ book, correct?

So, I’m curious because usually when you adapt a book you end up doing it by yourself. You don’t necessarily collaborate with the person that wrote it.

Safdie: Well, I was actually directing the writing as it was coming in. I had commissioned her to write about her life. I could tell she had a very high IQ, that she was intelligent and romantic in her thoughts. But I couldn’t convince Benny, my brother and co-director, and Ronnie [Bronstein], the co-writer and co-editor, the uniqueness of her perspective because I wasn’t relaying it the right way. I would say certain things and then I would just be like, “If she writes it down, I’ll be able to translate this very easily over to Benny and Ronnie.” They had never met her. Sebastian Bear-McClard had, but they hadn’t. They wanted to keep that to really cherish the distance to keep the film from falling down the path of romanticism that I was bringing. They brought the objectivism.

So I told her that I was interested in seeing how she wrote. She would write me emails and they would be very well written. She dropped out of high school when she was 15. She learned how to write and read by stealing college textbooks out of college dorms. When I asked her to write it gave her a sense of purpose. That’s all we need.

Sebastian Bear-McClard: And another income stream.

Safdie: Yeah, exactly. The first four pages that came in was like a revelation. We have a writer on our hands! She was giving me access to parts of her life that I didn’t even know about. Because it was a first person perspective from her point-of-view, her perspective of the characters was huge and it was clear that we had something to use. She wrote a lot. It covered almost eight years of her life. So we chose to condense stuff. We turned about 18 months into three weeks for the sake of the movie.

Ah, well it does feel like it has that intensity.

Everything is moving very rapidly.

Safdie: Yeah, that was one of the main objectives of the film. First, to shed some truth on what these lives are like. That’s what I was attracted to and this false sense of freedom. They actually aren’t that free at all. And another draw was the drama and the immediacy of the moment of the now. It was always exciting yet nothing actually happened. I would come back and I would have all these crazy stories and feel like I had lived three days in one hour, but when I tried to relay that to someone else they’d be like, “Well, but nothing really happened.”

Safdie: I thought that was so interesting that something could be so exciting, yet nothing was actually happening. I was very moved by that.

People would leave for a day and then come back. “What happened!?”

Safdie: Exactly. It doesn’t matter. They come back. My grandma said that this movie was so fascinating because it was about people with no past and no future. They just exist for this one moment. And I’m trying to always get at that in life. That’s why I’m so interesting in movies. You watch them as a very present person. Time becomes something else. I think about the time that elapses during a production or a film’s world. Like, Boyhood spans 12 years, but you’re watching it in a condensed form.

Talking about condensing things, it would have been very easy for you to have come in and used title cards to let us know you were jumping two weeks or something. You could have spaced things out.

Safdie: Orientation was never a thing that existed in Arielle’s book nor in her life. You never knew where you were going to stay or how much time had passed. I remember one time someone was telling me a story and they were telling it with a sense of distance that was so interesting. But it had happened less than a week ago. It’s like when you’re a kid and you want to hang out with your best friend but you can’t hang out until Saturday and it is like Tuesday? “It’s so far!” Why do we lose that? What happens to it?

Safdie: And this is different.

Bear-McClard: Days don’t even exist to them.

Safdie: We thought about it. We thought about having some type of orienting signifiers very briefly. But we realized it just wasn’t right. Take the hospital sequence for an example. The opening scene. That was a huge discussion with Ronnie. We shot a bunch of stuff in the hospital and we could have shown two weeks pass. That’s what is supposed to happen in the five-minute shot. That’s not what psych wards are like at all. Psych wards are boring and in this film there’s a ton of stuff that happens.

Bear-McClard: That’s a risk as well, though. I remember discussing this with someone else where it was like, “This is like a music video. Too much stuff is happening and that’s a crazy stylized shot.” It’s different from the rest of the movie. It’s obviously really beautiful and powerful. To me, I read that as the idea that she just got to the psych ward. Someone is messing with her. Her roommate’s crazy. But her first five minutes in the psych ward describe her two weeks in the psych ward. In fact, it could be longer than that. We don’t even know. It works.

There’s this wild elevated shot on Mike, Harley, and Arielle where they are walking down the street and you can hear them conversing. And there are shots of NYC like this that crop up all the time. I don’t imagine you had the budget to block off streets.

Safdie: Well, every interior location was locked off, so that helped in that stuff.

Safdie: Yeah, like White Castle. Those were all extras that we cast. But the street, one of my biggest pet peeves with movies is first off, extras casting is very specific and it isn’t easy, so a lot of people don’t like to do it. I hate seeing an independent movie where all the extras are very clearly friends of the filmmaker. It’s like the same person. You can see their friend circle. I hate that. But NYC is so diverse it’s hard to get that quality through extras casting. You could lock off a street and do it. But it would take a ton of time and energy. But I like the chance. I like putting our actors in a scenario where we tell them that they’re in close-up but being shot from a block and a half away. That adds a mood for the actors but it also puts a ton of pressure on our cinematographer. You know how many variables that can come into play? A car could just park in the middle of our shot. But it makes us all act like warriors. And you have to act well. Otherwise people are going to look at you funny. And while our camera is far away, our boom is still right there. People can tell something is going on but nobody can really tell because we’ve raised the stakes. Real life can exist around you and you need to blend in.

Well I’m sure it clued a lot of people in, but I bet even more people just used that confirmation to simply move on with their life. “Oh, they’re making something. Oh well.”

Safdie: Yeah, some would just move on or wave at the camera. But other people would get involved.

“Do you need some help?”

Safdie: Yeah, we filmed stuff like that but we never used it. It felt kitschy to use that.

You know, the biggest name in the film is obviously Caleb Landry Jones and he is nearly unrecognizable at first. I’m curious though because I could see him, being a well-know professional actor, giving advice to some of the other actors on set. Did that happen at all?

So they met in the middle.

Safdie: Exactly. Caleb, when I first met him, I told him I wasn’t going to give him the script. I gave him the first 70 pages to read from Arielle’s book. And it covered their relationship up until the movie begins. So he didn’t even read any action in the movie that happens. So he showed up with this unbelievably heightened perspective of his character.

Bear-McClard: And he was hanging out with the real Illiya as well.

Safdie: Yeah, from the second he arrived they were inseparable. About a week into their friendship we did the physical transformation and Iliya gave him his jacket and a few pieces of clothes and so they became this moving terror group. But yeah, he became so immersed. I really don’t think he’s recovered from all of it yet, to be honest. I don’t know. He loves being part of the fabric of a niche society.

Heaven Knows What is now in limited release and expanding.