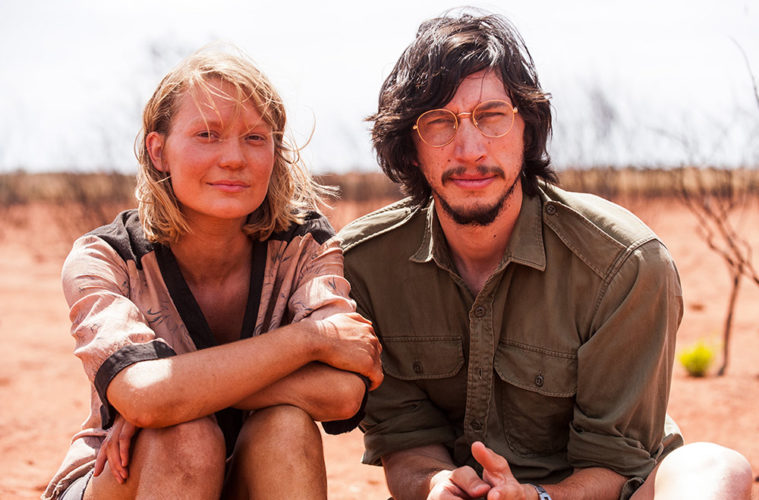 Arriving in theaters a year after its initial festival bow, John Curran’s stunningly beautiful film Tracks traces the 1,700 mile trek of Robyn Davidson (Mia Wasikowska) from the central Australian town of Alice Springs to the Indian Ocean. Our review of the film’s original cut (it has since been re-edited for its US theatrical release via The Weinstein Company) was favorable yet cited a few questions unanswered by the film. We recently had the chance to sit down with the director to get some answers, and more. Check out the full conversation below.

I saw Tracks a year ago at TIFF and I was surprised to hear you’re based in Rochester, New York. I’m curious as to the Australian connection as this and your first feature film (Praise) were both made in Australia.

I grew up in there [Central New York] and moved to New York after college. I was like 24, and I realized if I didn’t get out of New York and do something dramatic I’d get stuck in a life here that it would be difficult to extricate myself from. So I wanted to go abroad and do something out my comfort zone. And I thought Australia, it was tropical and they spoke English. Other than it wasn’t all that well thought out [laughs], but I went down there and ended up falling in love with it and I stayed for 18 years. Then I made my way back to LA with my wife and I had a kid by then and we just decided to move back up to Rochester for a few years and that turned into like seven years or something. Who knows when we’ll move back?

Are you more the Rick (Adam Driver) or Robin (Mia Wasikowska) from Tracks?

I’m sure Mia would argue I’m more of the Rick character, by my reasons for doing the film was that I certainly related to her. It’s a bizarre age – a few years after college and before the reality really sets in – that notion of pushing yourself outside your boundaries, I really related to that.

How did the project come to you?

The big attraction was the producer, Emile (Sherman) and I were looking for something to do and we looked at a few projects and ideas. Then he called about the book. I knew about the book and I read it. I think there was a real challenge to it. You have a character whose alone most of the time and she’s anti-social and refuses to talk about why she does it. That mystery fascinates me and alone it was enough to make me want to make a film about it. On top of that you also have the incredible character of this landscape and I thought it would pretty stunning and beautiful and fun to shoot in.

It’s an absolutely beautiful film. I know there’s that challenge because you start to capture her internal life which I know wasn’t on the page. What was your relationship like with Robyn Davidson as you were developing and making the film?

It was great and the reason it happened is because Robyn and Emile and I sat down and talked about our hopes for the thing and she could see what we were trying to do was something authentic to the book. We weren’t trying to take the book and change it into a romantic comedy. She’s a creative person first and foremost and she was there if we needed help but she didn’t make us feel that we had to check stuff through her. She read the finished draft and she saw a rough cut and she kind of popped up at certain milestones in the project but she never made us feel like she had to approve stuff.

Your set, your landscapes are changing every day, so your challenge is find a place to park yourself for weeks on end and get a lot of different looks on a daily basis. You can’t afford to keep moving that many people to different hotels and what not so you need to find a place to hunker down for an extended period. That’s hard when you’ve got to get the right angles and variety.

Did you shoot in sequence?

In some ways I’ll say yes. We started in town and moved out to the camel farm, so more or less.

I noticed for the U.S. release the film is shorter than the version I saw at TIFF. Can you comment on what was changed?

Yes, for the U.S. release we trimmed a bit. The voice-over was always a big part of it and we ended up going in and including more of that for the second half of the film — not a lot but a few more places. It drops out completely in the Toronto version. I never really had the opportunity [to re-edit a film] because it’s costly but Harvey was open to it. I’m not one of these filmmakers who says, “It’s good.” I’ll keep working on it until you drag me out of the room. I love both versions. The longer version is just longer, in a lot of ways I guess it’s purer I guess, but I kind of prefer the tighter version. Having seen it with a number of audiences at Telluride and Toronto and you’re thinking, “Right, that’s the movie I made.” It’s one thing when you’re in an edit room, but when you put it up on a big screen and watch it with an audience you go, “Okay, I can improve this.”

Was that one of the reasons for the delay or was that just the timing of the release?

Yeah, I think after we got done with the festivals and I was available to do some work on it — we probably could have gone in the beginning of summer but I’m not sure that’s when Harvey wanted to go with this film. So we had to wait out the cycle for it to go at a time when he wanted to release it. It is what it is. I think what’s interesting about Tracks vis-à-vis your previous films is that it’s a contained film with an epic feel, while you’re previous films like Stone, Praise and We Don’t Live Here Anymore are purely contained.

On Tracks we were shooting on these big stages with no trees, no houses, no other people and its daunting because how many ways can you shoot a person and the horizon clinging to their body? So you have to be very careful you are coming at sequences in a different way. We used very long lenses. I think we had a custom-made 2,800mm lens. It was a phenomenal lens and I could shoot Mia in close up and be literally 500 yards away from her. It was really cool, so we could do these scenes almost a half a mile away from her and it looks fantastic. So we started getting into possibilities when we’re using a super-long lens for close-ups and wide-angle lens for extreme close-ups. The opposite of what you would normally do.

I think that’s effective for how surreal the film becomes towards the second half as she’s on her journey.

I think in the book the heat and experience contributes to that. She goes a little loopy in the book and I just felt like the deeper she got into the desert the quality of the film should just evolve with her and so you’re trying to capture some of the inner voice of their experience and remaining true, but I absolutely thought as I was editing this that we go from modern to primitive and then to some other state altogether.

The film stops at a certain point and its introduced to us that Davidson has a whole other life as she’s active in the aboriginal land rights movements. Are we going to see a sequel to Tracks?

She talks about it more in the book than she does in the movie. Half the book is set in Alice Springs so we had to make some changes there and in the book she goes off on a tangent about the spade of the aboriginal communities, lifestyle and culture at that time in the mid-70’s, including politics. I wanted to touch on that in the film but I didn’t want it to become the film. The more you try to put it in then it seems gratuitous you know, you’re trying so hard. I’m not sure what the sequel would be, probably Robyn and her fascinating life.

What are you working on next?

I’m working on another journey story starting next year, a six-part miniseries Lewis and Clark for HBO.

I’m looking forward to see it – and seeing Tracks again on a big screen. Tracks is now in limited release.