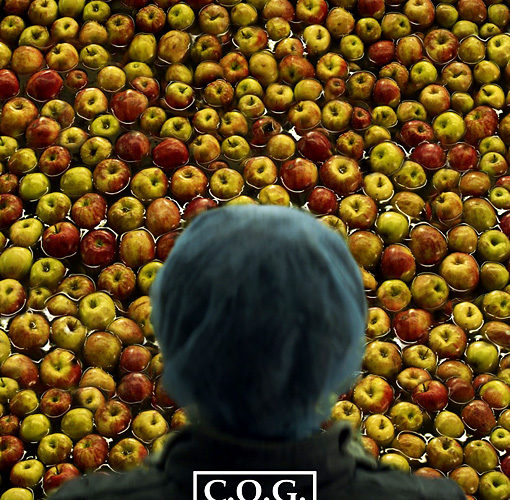 There is hilarity in the way that people interact when they are on different planes and there’s a rudeness underneath C.O.G. that comes off as parody instead. Every so often it crosses a certain boundary, but the moments are fleeting. The humor, in all its quirky glory, is what is the lasting impression of the film. If you aren’t quick yourself, you might not catch some of the smaller details that soften the blows. But there’s an undeniable charm to C.O.G. that is part of its honesty in human ugliness.

Starting off with the cliché story of two recent wealthy college grads setting off into the world to find themselves, we join David (Jonathan Groff) after he graduates Yale. He’s in Oregon and starting to work on a farm picking apples. Pompous but also curious and ignorant, David has no sense of the fact that these people’s lives revolve around what he views as a vacation. He’s supposed to meet his friend, a fellow female graduate, and they were supposed to have a journey together starting at the farm, but those plans fall through. So, he’s left there. Of course, he decides to make the best of it and see what all of this is about. David is an atheist and he has a very limited world view. A huge fan of novels and quick-witted, as book smart as he is, he is also dull when it comes to real world problems. He’s emotional when he is out of his element and while at this apple sorting factory he decides to taste a shiny apple out of a vat of liquid and suddenly regurgitates it. His coworker next to him chides him roughly, noting the liquid is full of pesticides.

An adaptation of a David Sedaris short story, writer/director Kyle Patrick Alvarez explores, through cleverly crafted believable characters, what role sexuality has in relation to Christian values. Not an outright religious support film, and not an atheistic piece of propaganda, C.O.G., which stands for “Child of God”, manages to create an interesting middle ground. Peppered with character actors doing exceptional work with limited roles, the film is always aware of just what it takes to get your mind rolling.

With a thudding, percussion-filled score including a fantastic recurring metronome-like composition number, C.O.G. might actually be too smart for its own good. We are given characters with deep flaws and shown an arc that doesn’t quite come to any spectacular realization. Yet, I appreciate the honesty Alvarez’s film shows. With standout performances by Corey Stoll, Groff, and Denis O’Hare, C.O.G. is able to elevate beyond quirk and into something lasting, whether you agree with it or not.

C.O.G. premiered at Sundance, screened at DIFF and will be released this year.