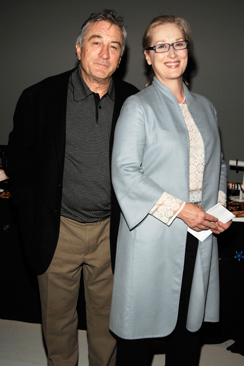 It wasn’t a question of them ever getting back together, but why it’s taken this long. In that case, accept it as is: decades after The Deer Hunter — as well as Falling in Love and Marvin’s Room, but who’s counting — it’s been announced that Robert De Niro and Meryl Streep are to collaborate once more on The Good House, an adaptation of the Ann Leary-penned novel that FilmNation and Tribeca Productions are expected to back, while Michael Cunningham — Pulitzer Prize-winning author of The Hours, later made into the eponymous film led by Streep — will be scripting.

As its original text would dictate, The Good House revolves around “Hildy Good (Streep), a New England realtor and not-so-recovering alcoholic whose perfectly compartmentalized life starts to come apart at the seams when she forms a new friendship with Rebecca McCallister.” As this new friend becomes a hot topic among the town’s chatty residents, Hildy’s newly developing relationship with an old partner, Frank Getchell (De Niro) — something of a mismatch, what with him being “a tell it like it is Yankee” (those damn Yankees!) — might alter the thread of things for the better. A “wickedly funny look at denial” is what they promise.

It’s got a chance, at least. As much as these dealings sound in line with Streep‘s recent acting raison d’être — and for the miniscule curiosity I have about what this yields — it’s the type of picture a reunion with De Niro, years down the line, ought to bring: none of the theatrics with which she’s become comfortable, and a more brash role for her co-star that, God willing, can provide a bit of the spark that we’ve only seen in stops and starts this whole millennium. An appropriate project might be all they need to attain a fine result.

Does this new title strike you as a good reunion point for Streep and De Niro?