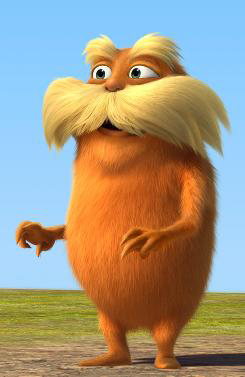 Danny DeVito Will Speak For the Trees as The Lorax

After the rousing success of Dr. Suess’ Horton Hears a Who, it’s not surprising more of his work is getting the CG animated feature film treatment. What is surprising is that this next venture into the wondrous world of Dr. Suess is the bittersweet tale of The Lorax.

For those of you unfamiliar, first off, I pity your childhood. Secondly, The Lorax is a tale of greed and eco-destruction. A man called the Once-ler comes into a beautiful forest that he systematically destroys to mass-produce Thneeds – a thing that everyone needs, don’t you know. The truffula trees are being cut down, the native wildlife is dying, and the only one who defies this Greed Is Good madness is a strange mustachioed fellow named The Lorax. The furry orange figure appeals repeatedly to the Once-ler to stop the rampant destruction, but is ignored again and again. In the end the land is raw and dead. The Once-ler is alone and regretful, and the story is passed onto a lone boy along with the last truffula tree seed – the ray of hope in a deeply dark children’s tale.

While The Lorax (in 3D) won’t hit theaters until 2012, USA Today has revealed some of the voice cast. And like Horton Hears a Who, there are a lot of reputable comics in the mix. Ed Helms (The Hangover) will play the wicked Once-ler, who will show his face – a departure from the book, while Rob Riggle (The Hangover) will play O’Hare, a snake oil salesman who peddles fresh air in a can that ironically damages the atmosphere. Zac Efron will voice the young boy previously referred to, and the beloved Betty White will play his grandmother. And most exciting of all, Danny DeVito has signed on to give voice to the Lorax, who speaks for the trees! Chris Meledandri, who executive produced Horton, who had this to say of DeVito, “Danny has this wonderful ability to be acerbic and grouchy but at the same time absolutely lovable…It’s almost like Walter Matthau had. His comedic edge was very sharp, but he always maintained that warmth.” When asked for his thoughts on the furry eco-warrior, DeVito had this to say:

“Look, I don’t want to be gruff about it, but we’ve got to wake up and smell the oil burning… I feel sometimes the only way to get things done is shake people up a little bit, and the Lorax is not a guy who pussyfoots around. He’s not a guy who uses kid gloves…No, no, the Lorax means business.”

Admittedly, I am/was a huge Suess fan. So much so that when Horton came out, I was affronted – Jim Carrey! His broad comedic stylings would ruin the humble Horton surely. Well, I was wrong. Utterly and completely wrong. When I finally saw the cartoon, I absolutely loved it. I laughed throughout, and I cried. Yep. At the end, when Horton declares in the face of adversity “A person’s a person no matter how small!” I wept. I do every time. I’m a sucker for Suess, what can I say. And though Horton made a fair amount of changes to the book I loved as a child, the tone and spirit were totally loyal to the source material, and it sounds like DeVito is as committed as the producers to stay true to the book’s message.

Between the fact that their last Suess adaptation won over a cynic like me, the vivid voice casting choices, and the exciting first look of the Lorax himself, the only downside I see is having to wait until 2012!

Are you looking forward to The Lorax? What do you think of the voice cast?