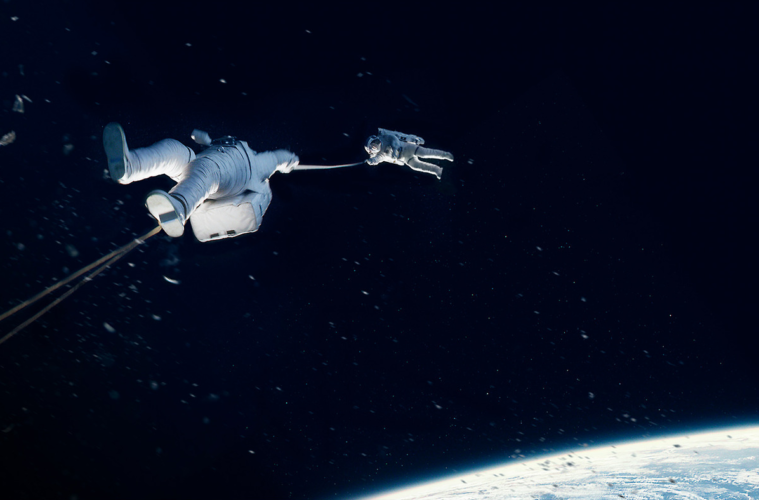 A month from tomorrow, Alfonso Cuarón‘s space thriller, Gravity, will finally land in theaters, nearly seven years after the arrival of Children of Men. With reactions having us enthused, there’s certainly nothing more we need to see (other than the film itself) for us to get in front of an IMAX screen — so, today brings a few updates on some of the technical, behind-the-scenes process that went into the creation of the project.

In the heat of the summer we got a few vague hints from James Cameron, who assisted with troubleshooting some technological roadblocks (alongside David Fincher) — but, now, a Variety feature unravels the specifics of Cuaron’s pitfalls. First, though, lets get a biased reaction out of the way, as the aforementioned Avatar director had some high praise for the Sandra Bullock-led film after seeing it a few weeks ago, saying, “I was stunned, absolutely floored. I think it’s the best space photography ever done, I think it’s the best space film ever done, and it’s the movie I’ve been hungry to see for an awful long time.” He adds, “What is interesting is the human dimension. Alfonso and Sandra working together to create an absolutely seamless portrayal of a woman fighting for her life in zero gravity.” High praise, indeed, but let’s move on to something a great deal more substantial. Cuarón says that, in reteaming with cinematographer Emmanuel Lubezki, they couldn’t use pre-existing technology for the film, due to their preference for long takes. With a budget at around $100 million on hand, they decided to create the entire feature in pre-visualization and, then, shoot the actors’ faces — Cuarón remarks, “we had to finish post-production before we could even start pre-production” —  with the story adding, “Whether the characters were floating gently, changing direction or tumbling in space, the facial light would have to be a perfect match for the Earth, sun and stars in the background.”

Lubezki’s trick was to create an LED screen that would fit inside a nine-foot cube for the actor, thus allowing lights to be adjusted on a whim (depending on what the shot called for). They even went a step further in order to configure their camera crew, using robots designed for car manufacturing to create a rig that operates heavy loads, allowing the movement of an actor to stretch great lengths and for them to capture a precise frame, angle, zoom, light position, etc.

This resulted in Bullock entering the light box in a large soundstage, with simply a small hole on one side; then, directly outside that hole was “a track extending away from the box, and on that track, the robot holding the camera.” During the 9 to 10 hours (at a time) Bullock stayed in the rig, she was surrounded by “rows of computer workstations with technicians controlling the light box, lighting, camera and the robots.”

I encourage one to check out the entire article, as it goes into fascinating details on Bullock’s breath and how it dictates her emotions, the casting process, as well as Lubezki’s specific struggles with lighting and how he’d begin work at 4 in the morning. If one wants to see more from Gravity, check out interviews with Clooney, Bullock, and Cuaron from Venice, as well as a new behind-the-scenes shot of our director next to the light box rig.