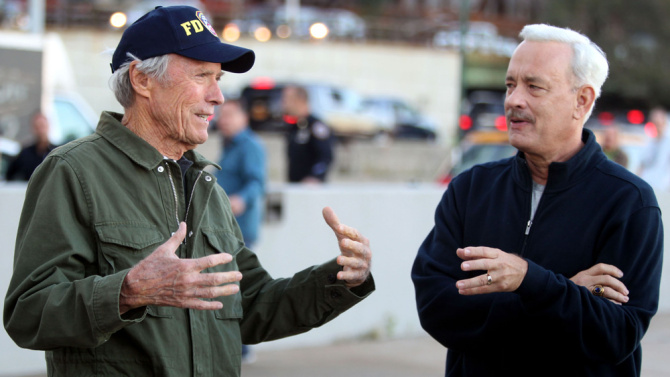 We’ve seen Hollywood’s top tentpole-makers utilize IMAX cameras to film a portion of their movies with the epic format. Christopher Nolan did it with his last two Dark Knight entries, Interstellar, and will do so with the forthcoming Dunkirk. J.J. Abrams had a portion of Star Wars: The Force Awakens filmed solely with the large-format cameras, and this year Zack Snyder shot roughly 25 minutes of Batman v. Superman: Dawn of Justice while the Russo brothers did just a bit more in Captain America: Civil War. However, there has yet to be an entire Hollywood feature to take the bold technical leap of filming entirely with the cameras — until this fall.

While the Russos plan to shoot the two-part Avengers: Infinity War solely in 2D Digital IMAX starting later this year, none other than Clint Eastwood, coming off the highest-grossing domestic release of 2014 with American Sniper, will be the first to set the record with this fall’s Sully. “Clint decided to try it and he just loves the cameras,” IMAX CEO Richard Gelfond tells Variety, confirming “it will be the first film released where virtually the entire movie was made with the technology.”

While Variety doesn’t specific what type of cameras Eastwood’s longtime cinematographer Tom Stern shot the film on, it’s noted elsewhere it was ARRI ALEXA 65 & XT. Considering that digital approach, it doesn’t measure up to Nolan’s use of true IMAX film, but we’ll see how it looks come September.

The film stars Tom Hanks as Chesley “Sully” Sullenberger, the pilot who, in 2009, heroically landed a U.S. Airways liner in the Hudson River just off the coast of Manhattan. More than chronicling that widely lauded event, the picture, as scripted by Todd Komarnicki, will also document a behind-the-scenes drama that could have cost him his reputation and his wings. As we look forward to the trailer to see what to expect, there’s something great about a director as seasoned as Eastwood being the first to push technology forward in this way.

Sully, also starring Anna Gunn, Aaron Eckhart, Laura Linney, Holt McCallany, Jamey Sheridan, and Jerry Ferrara, opens on September 9. While that relatively early-fall release date was questioned by some when announced, it’s now clear why it was selected, considering the rest of the season is crowded with IMAX releases. With this date, Sully will get a two-week run until The Magnificent Seven takes over on the 23rd.

What do you think about Clint Eastwood being the first director to fully utilize IMAX cameras?