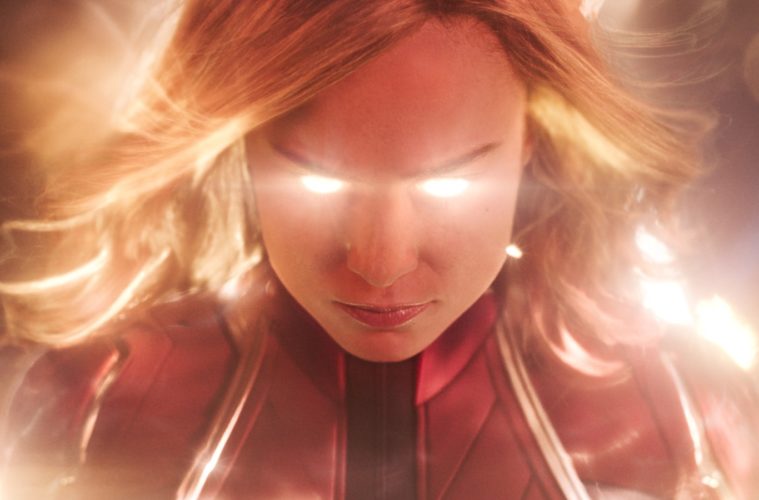 Marvel Studio’s first foray into a female-led film must, in our modern world, necessarily carry with it an unfair amount of cultural baggage. Will Brie Larson, as the titular hero, serve as a strong, noble hero for the women and girls in the audience? Will the movie address the gender-related elephant in the room with poise and aplomb or with grit and ferocity? Will this movie serve as a cultural sea change that will bring about a fresh wave of female-led blockbusters? All these questions, and more, swirl around a film like this and create an almost unfair environment for both critics and the film itself. It is, to be honest, almost too much for a single review to cover, and more than any one film should be forced to stand for.

So it is smart, in a way, that Captain Marvel seems to hold itself to no higher standard than the absolute minimum that people tend to expect from an entry in the Marvel Cinematic Universe. The second unit does their barely-serviceable work in creating action scenes that successfully begin, then drag, and then end. The visual effects teams marshal their legions to create passable spectacle when required. The actors show up, hit their marks, and in the end any real spark or joy that comes from the film comes by the grace of their innate, God-given talents, and very little else.

The film begins on Hala, the homeward of the noble Kree, a race of aliens that seems to have no real aesthetic uniformity. The Kree, who are led by an AI called Supreme Intelligence (perfectly represented by Annette Bening), are at war with the reptilian, shapeshifting Skrull, who are led by the slippery Talos (an impish Ben Mendelsohn). During a skirmish with the Skrull, Kree warrior Vers (Brie Larson) is taken captive and escapes to end up on Earth, where she must find a source of power before the Skrull can get to it first. All the while, her commander, Yon-Rogg (Jude Law) speeds across the galaxy to try to make it to Earth in time for the climax.

If all of this sounds a little goofy while at the same time more than a bit old-hat, then you’re pretty much on the money for what to expect here. A wrinkle, which attempts to make this an origin story wherein the hero already has their powers and their uniform, is the fact that Vers has amnesia, and doesn’t know who she is or where she comes from. A warrior without a life, all we know about her is that she tends to let her emotions override her focus, which we are told again and again (and again) is a liability. The problem is that this blankness robs Larson of any character to build or, really, act. The sum total of what the film asks her to do can be summed up by a dependable but tiring pattern of squinting, quipping, and then smiling before launching into battle.

Where the movie comes alive is in the moments in between the action. This is when the skills of directors Anna Boden and Ryan Fleck (Half Nelson, Mississippi Grind) really pop out from under the smothering fog of CGI and noise. Vers teams up fairly early on with Agent Fury (an eerily convincingly de-aged Samuel L. Jackson) and the two have an odd couple rapport that supports long stretches of the film. His incredulous-but-game acceptance of a situation involving aliens and superpowers almost makes you wonder what this film would be like if it were willing to be less of a superhero film and more of a buddy-cop comedy. When she first arrives on Earth, Vers’s steely martial alienness clashes charmingly against the earthlings of 1994, but as soon as the Skrull hit the fan that whimsy disappears and is replaced by brutal efficiency.

This is, after all, a Marvel film, where “character” and “personality” are cobbled together from varying levels of snark, earnestness, stoicism, and nobility; where the only civilians who show up will eventually turn out to be instrumental in the final battle; where personal details exist to form the convenient spine for a lesson to be learned in the final act. The script doesn’t lean too heavily on the Girl Power angle, but when it does it leans so hard and so clumsily that you wish it would have made it a real theme or through-line just to mitigate the tonal discordance and give the film a viewpoint. Really though; how can anyone expect that this film will create a new role model for girls when it can barely create a convincing earthling, regardless of gender? How can this movie make a sea change for film culture broadly when it doesn’t signal even the tiniest break from the norm of its own house style?

Larson is an actor of tremendous skill and presence, and Boden and Fleck are talented screenwriters and directors. While all three of these people find themselves muted and hamstrung by the requirements of the Marvel machine, Captain Marvel does make a stellar argument for the three of them coming back together to make a thrilling neo-noir. Larson can quip and smirk and take a punch, Boden and Fleck can create a fully-realized and damaged character for her to play, with sharp dialogue and grounded storytelling. You can almost feel all of them wanting to make such a movie during some passages of Captain Marvel.

That is the best that can be said of this Marvel Cinematic Universe episode (and perhaps all their offerings); that the layers of corporate-mandated sameness make it so that when the light of individual talent pierces them at all, you know it is because that light is particularly strong. It becomes a kind of scratch test for one’s strengths. Sadly, it will rarely if ever allow for those strengths to cohere into something more than the sum of their parts.