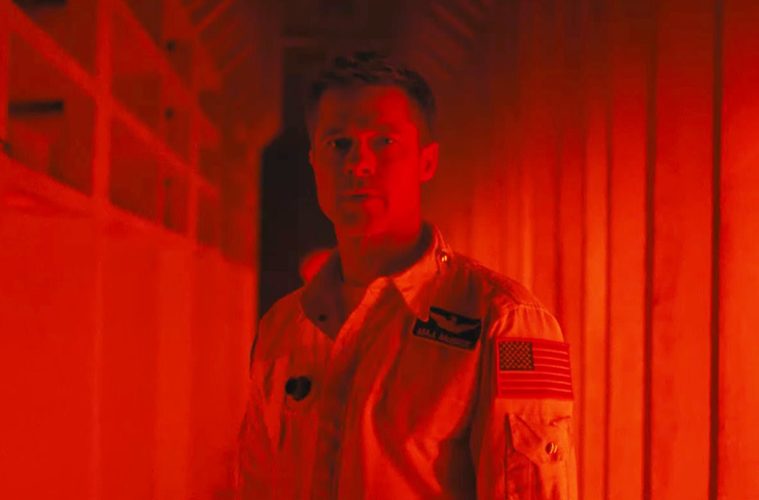 With Once Upon a Time… in Hollywood and The Irishman, it’s been a strong year for big-budget, auteur-driven cinema, but my pick for the best of the bunch in that regard is James Gray’s Brad Pitt-led adventure Ad Astra. A space epic of immense scale that still contains a personal, beating heart, if you didn’t get a chance to experience this on the biggest screen possible, it’s now available to stream. For more, listen to our podcast discussion. – Jordan R.

If the protagonist of Diamantino reminds you of a certain celebrity it is, as we can only presume, not accidental. The character in question–for whom this hallucinatory tale is named after–is a professional footballer who plays up front for the Portuguese national team. He sports diamond stud earrings (one in each ear), has a glow best described as maintained bronze, and apparently has yet to find a greater joy in life than pulling off his jersey after scoring a winning goal in order to better share with the world his rippling abs. Are we there yet? – Rory O. (full review) Geraldine Viswanathan, welcome to the rest of your career. The young star, who stole scenes in last year’s comedy Blockers, is the lead in Hala, written and directed by Minhal Baig. She plays the titular character, a Muslim teenager coming to terms with her parents’ expectations, her religion’s expectations, and the expectations she has for herself. Sundance has offered plenty of coming-of-age stories throughout the years. Few are as effective as this one. – Dan M. (full review) An official selection at Berlinale, Tribeca, Fantastic, Fantasia, and more festivals this year, IFC Midnight will be releasing Jennifer Reeder’s teen neo-noir musical extravaganza Knives and Skin before 2019 ends. Following a mysterious disappearance that shakes a midwestern town to the core, in our glowing review by Jared Mobarak, he says, “It’s thus a magical thing when Reeder lets them open their wings and fly. Sometimes it’s a cutting verbal barb or a devastating blow to the head with a folding chair, but it’s always this profound cathartic release….That she so effortlessly moves from the severity of such sequences to the restrained humor of others can’t be undersold since that dynamic is crucial for the film’s intentional artificiality to resonate as wholly authentic.” A24’s latest Sundance film directed by Joe Talbot–co-writing the script with star Jimmie Fails and Rob Richert– follows a man aiming to reclaim his grandfather’s home in a changing city. Hugely praised at the festival, our writer was a little more mixed, but it’s now available on Amazon Prime. Dan Mecca said in our Sundance review, “A beautiful score from Emile Mosseri and some memorable lensing from Adam Newport-Berra do quite a bit for a story that never really becomes a story. Jimmie and Mont’s friendship has plenty to invest in and the two actors do top-notch work. The subject matter is immediate and engaging. But the structure of this film is languid to the point of aggravation. Scenes linger on a minute too long and then another sequence later on achieves the same point. It’s clearly the intention to capture these lives fully and to find the style and grandeur within ordinary moments, which is admirable. Ultimately though, Talbot seems reticent to trim down this piece into a streamlined narrative that will hold attention from start to finish.” Jessica Hausner’s English-language debut Little Joe promises a crossbreed of shrewd science fiction and health care satire, but it scuppers its genre creds in exchange for a sterile arthouse drama that rather muddles its conceit. Emily Beecham, so good as a bohemian partier in the British flick Dafne, plays Alice, a fastidious employee at a faceless corporation that makes genetically-modified natural remedies. Alice is the creator of a new blood-red flower that changes its scent to make its owner happy, with supposedly antidepressant properties, for a world in the thrall of a mental health crisis. It could make her bosses very rich, but is this to be one of those tales when man plays God and it all goes wrong? – Ed F. (full review) As an elevator pitch: it’s Kramer vs. Kramer for the 21st century, with Scarlett Johansson and Adam Driver–both in career-best form–in the Streep and Hoffman roles, respectively. Nicole (Johansson) and Charlie (Driver) are partners on the verge of a break-up and parents to young Henry (Azhy Robertson), their only child. Charlie, a soon-to-be recipient of the MacArthur grant, is a playwright on the cusp of real fame, and the head of a successful theater group that is about to make the jump to Broadway. Nicole is a Los Angeles native who once starred in a frat house comedy but left the Hollywood path in order to act in Charlie’s plays. You might spot where the tensions eventually lie. – Rory O. (full review) It is hard not to be entertained by QT8: The First Eight, a feature-length documentary chronicling the first eight films written and directed by Quentin Tarantino, featuring interviews with the likes of Samuel L. Jackson, Tim Roth, Michael Madsen, Kurt Russell, Jamie Foxx, and Jennifer Jason Leigh. The clips are a reminder of the still-startling brilliance of Reservoir Dogs and Pulp Fiction, the slow-burn sensuality of Jackie Brown, and the two-part powerhouse that is Kill Bill. Significant time is spent on Inglorious Bastards and Django Unchained, and two films most in need of reappraisal—Death Proof and The Hateful Eight—are given proper respect. – Christopher S. (full review)

Tigers Are Not Afraid (Issa López) As the Huascas gang runs unchecked through their streets, devoid of morality and always ready to scoop up an unsuspecting woman or child to sell into a human trafficking ring, the orphans created in their wake become their underestimated adversaries with nothing to lose. Kids like Shine (Juan Ramón López) understand what’s happening despite their age. He knows that the same people who took his mother from him also left Pop (Rodrigo Cortes), Tucsi (Hanssel Casillas), and Morrito (Nery Arredondo) to fend for themselves. So he forms a gang of his own, stealing what they can to stay alive while also hiding from the men burning down their homes. – Jared M. (full review)