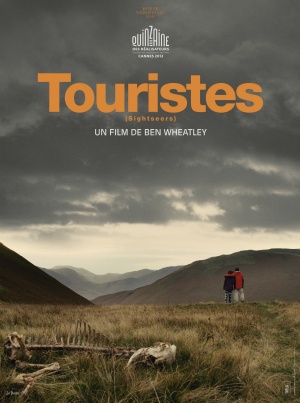 In Ben Wheatley’s third film Sightseers, the British director, known for taking scenes of normalcy and then spiking them with extreme violence, continues his streak of creating memorable unconventional cinema. The biggest difference compared to his two previous films, Down Terrace and Kill List, is the focus on comedy, in particular the dark kind. It’s a slightly different genre for Wheatley to explore, but he does so admirably, creating a film that is equal parts absurd as it is berserk. Starring a pair of stand up comedians, who also co-wrote the script together, and produced by Edgar Wright, Sightseers is a unusual blend of exquisite cinematography, hilarious ridiculousness and over the top death and gore.

Following a quirky neurotic couple, Chris (Steve Oram) and Tina (Alice Lowe), who after leaving Tina’s dog obsessed mother, purchase a caravan to traverse the tourist traps of England. The plot, for the most part, centers around these series of adventures from spot to spot, highlighting the natural quirk of the British countryside. But it soon becomes transparent that not everything is normal with Chris and Amy’s behavior, and their bizarre tendencies are opportunities for Wheatley to explore his own cinematic prowess. Each time they park their caravan unexpected encounters occur that usually result rather badly for everyone who is not Chris and Amy. Starting off seemingly innocent, the plot moves rather quickly into the dark side of human neurosis, depicted by a series of increasingly devious crimes.

It’s clear that Wheatley is a superbly gifted technical filmmaker, with an uncanny ability to harness editing, cinematography and clever dialogue to create a roundhouse kick effect. The film is brutal and proud to be, taking scenes of everyday life and pushing them to the limit. Yet Wheatley is clever enough to never stray from examining his characters thoroughly, giving scenes that might come off as purely slapstick some gravitas to the slow dissolution of their sanity. Wright seems to have lent a hand at keeping things light hearted without comprising Wheatley’s signature brutality. Also, a pop soundtrack including “Tainted Love” perfectly encapsulates the couple’s relationship as an unusual bound between two very disturbed individuals. At it’s core, Sightseers is a road-trip movie that captures the British countryside in stunning beauty, while delivering a bevy of funny exploits. Lowe shines as the basket case Tina, feeling like a British Kristen Wiig. The one main fault with the film is that some of the set-ups feel a bit contrived sometimes, in so much that the outcomes are usually easy to see coming. Yet that’s a small conceit for what is arguably one of the better black comedies of recent years and a testament to Wheatley’s keen style that will keep him on people’s radar for years to come.