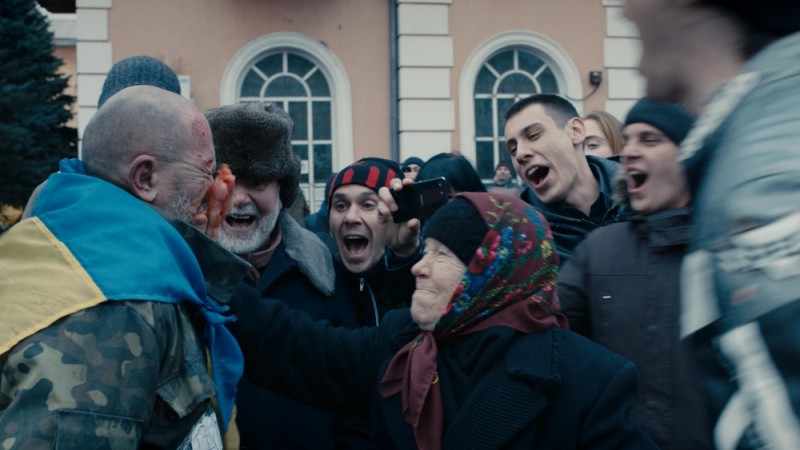 Sergei Loznitsa’s Donbass forms a rough trilogy with two of his previous features, My Joy (2010) and A Gentle Creature (2017), offering another social allegory that functions as a bitter criticism of Russia’s contemporary politics. This time, instead of an unidentified Russian setting, the action takes place in the eastern Ukrainian region that gives the film its title, where a Russian-supported war has been ongoing since 2014. Given that Loznitsa is Ukrainian, this change of scenery might explain the added ferocity of his critique, which is extreme enough to make for an acutely oppressive viewing experience.

Donbass‘s world is very similar to the other chapters in this trilogy. The social contract has been so worn away by the invisible powers that be, society has regressed to a state of nature ruled by violence and corruption. That a war is raging doesn’t actually change much, except provide a convenient excuse for abuse, as anyone can be called a fascist in order to legitimize all types of savagery. Even stylistically, the film closely resembles its predecessors. The color palette is once again dominated by bleak autumnal hues and Loznitsa’s regular DP, Oleg Mutu, employs the same relentlessly claustrophobic visual strategy as before, keeping his camera in the midst of the action so that the widescreen compositions are teeming with horrible people doing horrible things at all times.

The biggest change is structural. This time, rather than follow a single character through the depraved scenery, Loznitsa has composed his narrative from a series of vignettes interconnected in the relay-race mode of Buñuel’s Phantom of Liberty. A character will move from one situation to the next, or an incident such as an explosion will spill over, and the focus will shift to another set of characters, thus initiating a new episode.

Some of these are excellent, such as a scene wherein the camera roams a large hall full of men speaking on the phone to their banks or families, all of them arranging for bribes to be wired to the military — though the aesthetic couldn’t be more different, the surreal impact is reminiscent of a Roy Andersson film. Other vignettes feature violence so excessive and drawn-out as to be almost unbearable. In what is possibly Donbass‘ most unpleasant chapter, a soldier ties a defector to a pole in the middle of the street so that passersby may abuse him. A mob quickly forms and the man is screamed at, spat on, and savagely beaten for what seems like an eternity.

In strict terms of craft, Donbass is an impressive achievement, but its heavy-handedness nevertheless feels inordinate. Since Loznitsa doesn’t provide almost any historical and political context, it’s unlikely that anyone without prior knowledge of the war in Donbass will come out with much actual insight into what’s going on there. And given that the director has articulated an almost identical critique in two previous films, there’s an element of redundancy to this vicious spectacle. By punishing his audience, rather than urge them to listen, he might just convince them to stay away.