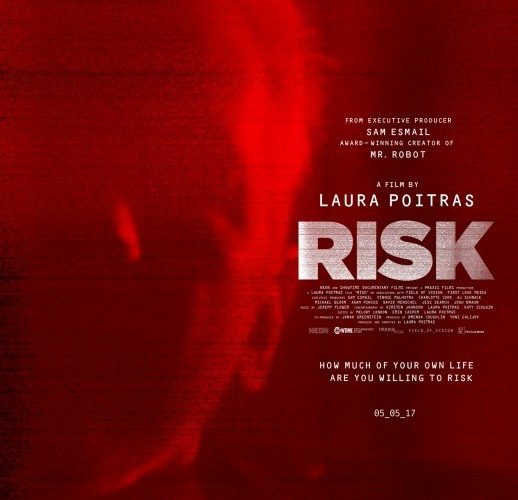 Laura Poitras’ greatest strength as a documentarian is winning the trust of high-profile individuals and getting them to appear in front of her camera. In her recent features she has used this talent to bring a more acute sense of personal immediacy to stories that have dominated the news in the wake of 9/11. The Quest focused on Abu Jandal, Osama bin Laden’s former bodyguard, and Citizenfour observed Edward Snowden in the days leading up to his momentous disclosure of the NSA’s global surveillance programs. As Citizenfour came out over a year after the events, which were extensively reported on by virtually every media outlet around the world, its appeal lay less in its revelations than in the fact that it allowed us to sit in on a moment that changed history. Sadly, this quality is largely missing from her new documentary Risk.

We do get to meet WikiLeaks founder and editor-in-chief Julian Assange, but he hasn’t been as much of an enigma as her previous subjects, and otherwise Risk offers few new insights. What it does offer, as did Citizenfour, is a corroboration of our paranoia.

The film starts in 2011 at the time of the Arab Spring. In the second chapter – Risk is split into ten chapters, though the structure feels somewhat arbitrary – Jacob Appelbaum, one of WikiLeaks’ activists, is in Cairo speaking at a panel attended by representatives from the largest local communication companies as well as international ones like Nokia and Vodafone. He accuses them of censoring the Internet during the uprisings, rendering sites like Twitter inaccessible and thus effectively working against the revolution that overthrew Hosni Mubarak. The suited-up men try to protest, but Appelbaum has evidence.

Even more unsettling is when Appelbaum later describes the recent emergence of an international mass surveillance industry. That is, private companies that devise covert ways of infiltrating personal computers, for example through widely used programs such as Skype, Adobe Acrobat or iTunes. One method is to send fake update notifications via these programs and once the user downloads the new version, a backdoor is installed, allowing for distant monitoring of the machine. At the time, Appelbaum could prove that 25 different countries, including democracies, were using the services of such companies. This was five years ago, so it’s reasonable to assume that the number is even higher today.

These passages are genuinely fascinating, but too much of Risk is devoted to documenting Assange’s legal battles after he’s accused of sexually assaulting two women in Sweden. The case is old news by now and it’s pretty widely accepted that it’s a ploy to eventually get him extradited to the U.S. While it is fun to watch him disguise himself with hair-dye, tinted contact lenses, fake earrings, and a biker get-up to sneak into the Ecuadorian embassy in London after his last appeal is rejected, Poitras takes very little advantage of her direct access to Assange to offer up any other information that isn’t already common knowledge.

The only time Assange speaks to the camera about the affair is to make a borderline offensive comment about how it’s in the two women’s interest to drop the case and save themselves unnecessary emotional distress. He never explicitly addresses the question of his culpability. Were Poitras a more effective interrogator à la Errol Morris, she would have prodded him further.

Risk premiered at the Cannes Film Festival and opens on May 5. See our festival coverage below.