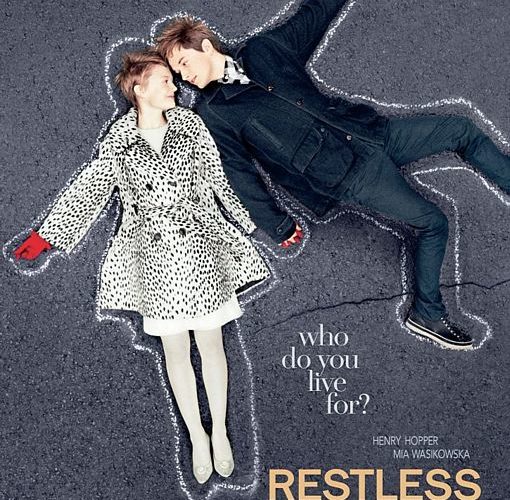 At the heart of Restless, the new film by American auteur Gus Van Sant, is a heartfelt relationship between two young people that begins at a funeral. Thus it’s no surprise that with some surprisingly tender direction the film ponders the connection between love and life. Van Sant, who won the Palme D’Or with his controversial film Elephant, returns to Cannes with a much more accessible and sentimental piece of work that resonates long after the final reel has rolled. Reminiscent of the sentiments elicited from Harold and Maude, Gus Van Sant has crafted a sincere star-crossed romance that honestly examines our fear of death.

Enoch Brae, played by newcomer Henry Hopper, has an unusual obsession with funeral crashing and the sight of dead bodies. Unwittingly, he makes eye contact with a young female at one funeral and a relationship is instantly forged. Annabel Cotton, played by starry eyed Mia Wasikowska, dresses like a boy and is fascinated by Darwin, the birds, insects, a true Naturalist. What unfolds is a odd connection forged by their mutual fascination with each others secrets. Enoch is best friends with a ghost named Hiroshi (Ryo Kase), a kamikaze pilot from WWII, who plays battleship with him, keeping him company from his dark past. Anabel works at a hospital clinic for children with cancer, but the truth is she also is suffering from same ailment. As their romance develops, both are painfully aware of each others suffering but for them it doesn’t matter. Their maturity when dealing with these complex issues of mortality is remarkable and honest, from the point of view of two individuals who understand the pain of loss. But surrounded by thoughts of death, they find solace in each other and learn how to embrace life. What unfolds is a sincere examination of two souls lost in each others unique and quirky habits as the painful truth of reality slowly unfurls. Amazingly, Van Sant is able to balance the sentimentality without ever becoming cheesy, a common trope in this kind of genre. There is a fantastic scene in which you think the film is becoming cliche, but then Van Sant flips the moment on the audience addressing the very problem.

Restless is a delightful unexpected treat that handles it’s characters and their situation with respect. It’s definitely more of mainstream avenue for Van Sant who traditionally isn’t this warm with his direction. This might be due to the fact that Ron Howard, Bryan Grazer and Bryce Dallas Howard produced it. Peppered with old classic pop songs, shot in a vintage and romantic style and edited with careful attention to subtle details, Restless is a fantastic portrait of unrequited youth that proves true love can last forever.