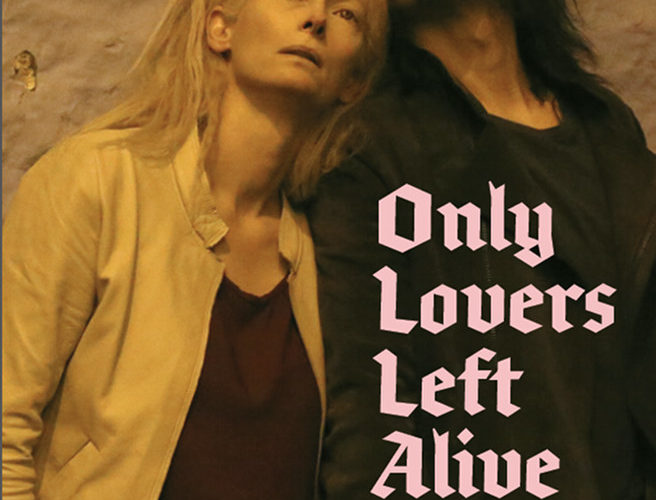 Hipster vampires inhabit Jim Jarmusch‘s Only Lovers Left Alive, an unconventional love story set between the desolate locations of Detroit and Tangier. Utilizing his signature deadpan comedy and idiosyncratic approach to filmic expression, the film will certainly appeal to fans of the director’s more bizarre tendencies. Minimal in style, yet bleeding with coolness, this is perhaps the most unusual and restrained vampire movie in recent memory, primarily because Jarmusch is less concerned with the violent thirst for blood and other typical cliches associated with this sub-genre of mythology. Instead, he delves into the fact that these characters are intelligent bohemians with a wealth of worldly knowledge, a factor that lets the writer-director playfully muse about history, philosophy, music and love. Only Lovers Left Alive is a stylistic portrait of two hopelessly romantic individuals in the most unexpected of settings.

Starring Tom Hiddleston and Tilda Swinton (she reteaming with Jarmusch after Broken Flowers and The Limits of Control) as Adam and Eve, the plot revolves around this duo reuniting after their century-old love affair rekindles in a dream. It’s represented in a series of opening shots that, in their design and structure, create one the most hypnotic and mesmerizing openings in recent memory: an image of spinning stars dissolves over a record player that, then, cuts back and forth between alternating overhead rotating captures of Adam and Eve.

Adam hides out in his musical lair in the desolate city of Detroit, crafting oppressive doom rock with his multitude of analog instruments and equipment. Eve, living by herself in Tangier, decides to visit her old lover out of boredom and longing, taking a night flight for the rendezvous. The tranquility of their reunion is shattered when Eve’s younger sister, Ava (Mia Wasikowska), also shows up, disturbing Adam’s carefully meticulous, discreet way of living operated so as not draw attention to his unusual lifestyle. Part of what makes Lovers so purely enjoyable is a Jarmuschian charm each character exudes, their scripted form emboldening a relatively familiar cool outcast archetype as they mope around at night; in a way, this is as much a love story as it is one about outsiders, dissecting what it means to live on the fringe. Moving behind the camera, style and mood enhances the claustrophobic world they inhabit, while even fashion sensibilities of each vampire evoke an almost rock star quality. (Eve’s hair is a wild tornado of grey hair, almost similar to that of Jarmusch’s signature coiffure.)

In addition, the music by Jozef Van Wissem is rapturous, encapsulating an end of the world type vibe. If you are not on board with these various ingredients, however, the end result of such a singular vision is very likely to leave one slightly detached. However, if you give yourself in to these stylistic elements, the world of Only Lovers Left Alive practically jumps out of the screen, resulting in an oddly poetic ode to the late-night intelligentsia conversations and music scenes that have fascinated Jarmusch for decades.

Only Lovers Left Alive premiered at the Cannes Film Festival, and will be released by Sony Pictures Classics later this year.