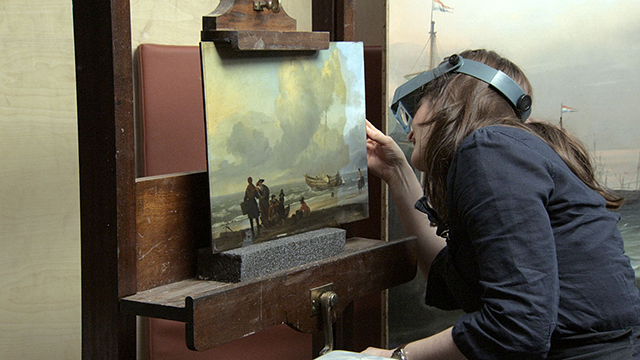 Every Frederick Wiseman film begins with a parable that defines, as a whole, the institution on which it will focus, and one practical that defines its tension. For National Gallery, the director’s meditative look into Britain’s largest collection of classical art (located adjacent to Trafalgar square in London), our opening is a tour guide explaining a Christian triptych icon to the men and women she leads. Instead of discussing the work’s artistic merit or its visual splendor, she asks each person if they can imagine themselves in the 13th century, under what context they would see it, and, most importantly, how they would communicate with it. In the second scene, two administration types discuss the major problem with their gallery as it stands: how to address the public without lowering the standards of art. How can they communicate the old masters? As National Gallery will show, paintings can communicate many things to many different people, and this latest institution makes for a unique look at the role of art in public life. Wiseman — less than nine months removed from one of his greatest films, At Berkeley — is once again looking at an educational system. While we have some behind-the-scenes discussions of public relations and financial hardships, these are probably the least-compelling exchanges in National Gallery; instead, poetic reverberations between public and art bring the film to life. How can a painting be relevant today? Wiseman slides us through the numerous ways as he roams the galleries. Tour guides and academics give lectures and talks about the various works, ranging from the formalist, the contextual, to even an emphasis on narrative, both in the high-minded, philosophical sense of history, as well as getting children interested in art through paintings.

More illuminating than different academic philosophies is when we see that a painting does not just sit. Some of the beset material takes us back into the restoration process, the information on restoration not only an essential lesson in how this works, but also a sign of the competing philosophies that emerge. Should a restoration reveal the document of the past? The process of the artist? Or simply the content within the painting? These debates will be fascinating for anyone interested in film restoration as well, for they combine the technical process with these philosophical questions, often revealing how each background will inform one’s philosophy. (For instance, the man who controls the lighting of painting is offended whenever restorers remove varnish, considering it a necessary document.)

National Gallery sees the institution as a voice of communication — a way to contextualize the past and the present. Wiseman’s interludes between various sequences simply focus on painters staring at paintings, with him cutting between to often match eye lines or choosing a closer shot to emphasize one aspect. Through this, he meditates a literal communion between the life of an artwork and the life of an individual. Scene after scene, National Gallery asserts that these works are not still images, but moving and breathing objects, whether emphasizing tour guides who focus on the movement and emotions, the way paintings will communicate differently based on their placement in rooms, or simply focusing on the back rooms where models are translated onto paper. National Gallery is more plethora than the deep-seeded tension that drove At Berkeley’s narrative of intense liberalism mixed with pragmatic conservatism (along with that film’s brilliant structure). The voices here seem less harmonious, and I would concede that too much within feels tangentially connected at times, especially when we enter the roles of the administration. And as a three-part series of talks on works of art by different presenters climaxes the film, it appears Wiseman is showing that it’s not the works of art which are varied so much as the voices describing them. As a brief talk on Holbein’s The Ambassadors will evince, perspective can reveal very different aspects within a single work.

This is both the wondrous revelation and, perhaps, the slight tragedy of National Gallery. Each work can communicate in a million different ways, so how could one institution create a unified voice for the public? It’s a tricky one that Wiseman navigates through his three-hour runtime. One restoration instructor tells his students that the varnish added before every job means the work of one generation — work that might take decades — can be erased in 15 minutes. Though something may be lost, something new is always added. In the penultimate scene, a teacher reads a poem by Diana the Hunter; in translating it, she admits she has also made her own contribution to the artwork. These are not the great works of dead masters — they are living and breathing objects, inspiring the men and women that roam the gallery’s halls.

National Gallery premiered at Cannes Film Festival and is currently without a U.S. distributor.