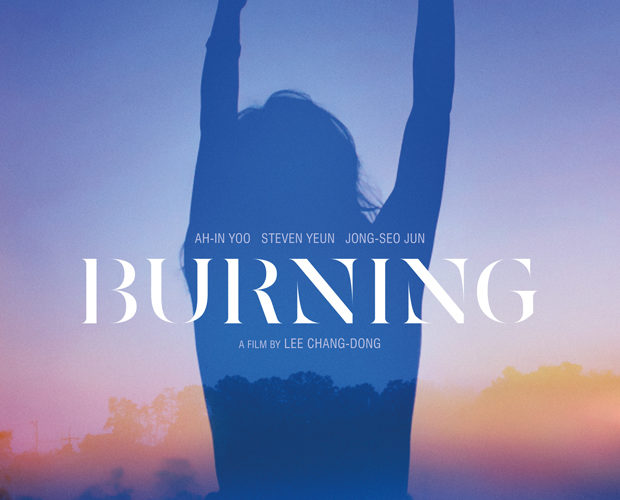 Whoever it was that said a film should be expanded from a short story, not condensed from a long one, certainly had Lee Chang-dong’s ear. For his latest film the South Korean director behind such celebrated work as Poetry and Oasis has taken a short from Haruki Murakami and built on it, stretching and fleshing it out into a two-and-a-half-hour-long film. Not bad.

The result, Burning, proves a rather gripping ride, even if the director arguably pours a little too much filler into the story’s more mysterious cracks. Murakami’s “Barn Burning” first appeared in the New Yorker in 1992 and was later included in a collection of 17 shorts entitled An Elephant Vanishes. It tells the fable of a man in a rural town who is visited by an old flame (no pun intended) and her new partner. The trio smoke a joint and the woman passes out, leaving the stranger to reveal that he enjoys burning barns in his spare time, once every two months or so.

Lee begins his narrative a few months before the events of the short, on the day when the protagonist (named Lee and played by Yoo Ah-in) runs into that old flame (named Shin and played by Jeon Jong-seo) for the first time since high school. They have an intimate date and sex the next day, but then Shin disappears for a holiday in Kenya, leaving Lee to feed the cat. She returns with the mystery man in tow, an alpha male named Ben (Steven Yuen of Okja fame) who drives a Porsche Carrera 911 and, as Lee notes with both seething contempt and visible envy, listens to jazz while cooking pasta. What follows is a surprisingly slapstick and rather excruciating love triangle with Lee in the castrated beta-male role.

Murakami is not a writer who lacks for a sense of humor, but one gets the sense he might not exactly have been leaning towards something quite so abruptly farcical when he wrote”Barn Burning.” However, depending on your devotion to the writer, that might prove a compliment. Lee is nothing if not a capable filmmaker, and even if his add-ons rob the plot of a great deal of its most delicious ambiguities, the resulting mood is more than enough of a pay-off. Beautifully shot by Bong Joon-ho’s sometime cinematographer Hong Kyung-pyo, Burning has the look and feel of a high-spec, adult psychological thriller, with echoes of Vertigo and maybe even Patricia Highsmith.

As those echoes might lead you to conclude, Shin disappears right after the events of Murakami’s story (about this film’s halfway mark) and Lee begins to obsess over his lost love’s whereabouts. If you’re thinking this all sounds a bit chauvinistic, it’s because it probably is, in the way that Murakami’s novels — and other writers of his ilk — are. The character of Ben is a shameless womanizer who seduces younger, less cosmopolitan women who his snotty friends then make fun of. When he grows bored he simply replaces them with a new model. The character of Lee, in his own way, isn’t a whole lot better, always trying to be the savior in order to overcome the beta-male complex he believes is holding him back. If there is a comment here about class, it is soon discarded.

This all adds up to quite a riveting watch, even if it is a little old-fashioned in its representation of gender politics. People these days are, let’s be honest, probably more impressed by farms than sports cars, but don’t let that get too much in the way of what Lee has constructed here with his first film in almost a decade. The director himself started out as a novelist, releasing his first book in 1987 before becoming a key writer, subsequently director in the South Korean independent film movement that emerged in the early ‘90s. This will ultimately come as no surprise. Indeed, Burning might not have a huge amount going on below its gorgeous surface, but it drags the viewer along with all the seductive intrigue of a frothy page-turner.

Burning premiered at the Cannes Film Festival and opens on October 26. Find more of our festival coverage here.